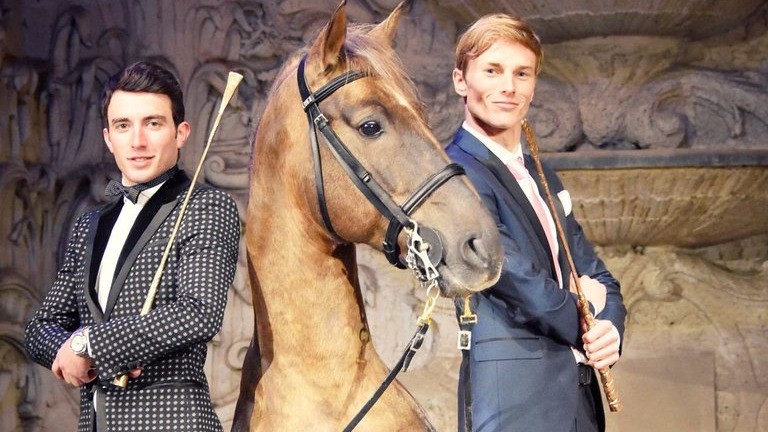 Champions of France James Reveley (right) and Pierre-Charles Boudot pose with their Cravache d'Or trophies at Chantilly
APRH
1 of 1
By Scott Burton 6:00PM, MAY 28 2017

James Reveley was presented with his Cravache D'Or (golden whip) as France's 2016 champion jump jockey at a ceremony in Chantilly on Saturday evening.

Reveley, the first foreign-born jockey to win the jumping crown (which runs on a January-December basis) since the inaugural Cravache d'Or was awarded in 1958, was honoured alongside his counterpart on the Flat, Pierre-Charles Boudot, as well as the leading trainers for last year, Guillaume Macaire and Jean-Claude Rouget.

Speaking on Sunday afternoon, Reveley, 28, said: "I had the family over and a whole table supporting me, so when I went up on stage and everyone was cheering it was quite overwhelming.

"The Grandes Ecuries is a magnificent setting. It wasn't a mad night like you get at the Lesters, but all the top trainers and owners were there and it was a good meal."

Having suffered from injury at the start of 2017, Reveley has given 2015 Cravache D'Or winner Bertrand Lestrade a start of more than 20 winners, but he has more immediate targets in mind with Device and De Bon Coeur at Auteuil in a fortnight's time.

Reveley said: "It would be a big thing to win the French Champion Hurdle with Device, who is a full-brother to [Grand Steeple-Chase winner] So French, but he is not dominating the hurdlers like So French does the chasers so it won't be easy."

FIRST PUBLISHED 5:16PM, MAY 28 2017
I had the family over and a whole table supporting me so, when I went up on stage and everyone was cheering, it was quite overwhelming