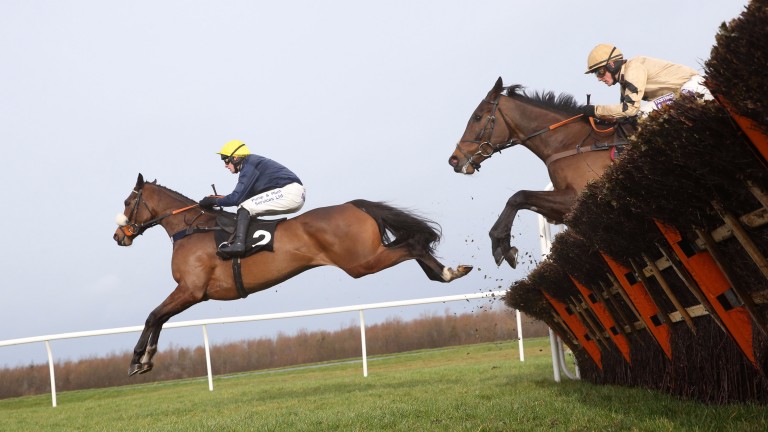 David Bass thinks his fall at Ascot last month left him looking like he had gone 12 rounds with Anthony Joshua and the jockey has another heavyweight in his sights as he prepares to take on Racing Post Arkle favourite Altior with Charbel in Saturday's Racing Post Henry VIII Novices' Chase at Sandown.

Bass suffered a fractured cheekbone at Ascot 11 days ago and has been surprised by the speed of his recovery, having got the all-clear to return to action at Wincanton this afternoon.

Providing the meeting passes an 8am inspection, Bass will partner two horses for Charbel's trainer Kim Bailey, but it is the Sandown showdown with Altior that he is relishing.

"The swelling came down fairly quickly and it's all healed up quicker than I thought," he said. "It's less than two weeks, but I don't need my face to ride, luckily!

"It didn't look pretty for a few days and was very swollen – it looked like I'd gone 12 rounds with Anthony Joshua. I saw a specialist who saw my vision was fine and the fractures are stable enough so it's okay to ride."

Bass partners Aliandy in the novice handicap hurdle (12.40) and Cresswell Legend in the bumper (3.50) at Wincanton.

"Aliandy won last time and is up 5lb but I think he can run well again, while we quite like Cresswell Legend," he added. "He ran really well first time out and we think he'll be a bit better going right-handed, so hopefully I can nick a winner."

The jockey had the option of heading to Aintree on Saturday to ride Grand National runner-up The Last Samuri in the Betfred Becher Chase, but hopes his decision to side with Charbel pays off.

The five-year-old was no match for Altior in the Supreme Novices' Hurdle last season, but made a smooth debut over fences at Uttoxeter in October – form franked by subsequent wins for the second and third Le Prezien and Top Notch.

"It was a very hard decision whether to go to Aintree or Sandown," Bass said. "We all discussed it, but it was my decision at the end of the day.

"Altior is going to be very hard to beat, but we think we've improved since Uttoxeter and have improved a hell of a lot from last year, so I'm quite looking forward to taking him on.

"Last year I kept saying Charbel would be better over fences, but we were still in two minds what to do with him this year. We decided to go chasing and I'm glad we did.

"It was good ground at Uttoxeter and I imagine it will be similar at Sandown, which won't be a problem; his best form's been on decent ground."

Trained by Nicky Henderson, Altior was flawless on his chasing debut at Kempton 12 days ago and is the general 2-1 favourite for the Racing Post Arkle.

"He's fine and hasn't done very much as he only ran last Monday," Henderson said on Wednesday.

Altior faced just one rival at Kempton and with only six entries will face another small field that will be reduced further if smart hurdler The New One bypasses Sandown.

He also has an entry at Exeter tomorrow and trainer Nigel Twiston-Davies said: "We’re not leaning in either direction at the moment. We haven’t got to make a decision until Thursday morning. We’ll go where is right for the horse."

FIRST PUBLISHED 3:32PM, NOV 30 2016
Last year I kept saying Charbel would be better over fences, but we were still in two minds what to do with him this year. We decided to go chasing and I'm glad we did