Champion returns from injury with four rides at Lingfield 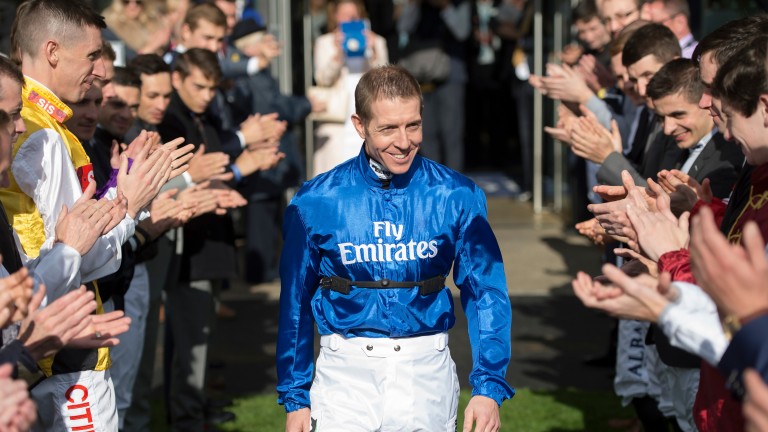 Champion jockey Jim Crowley, who has taken a break from riding since breaking his nose in the fall that left weighing room colleague Freddy Tylicki paralysed, returns to the track at Lingfield on Wednesday.

Crowley went back to basics as he recovered from injuries sustained at Kempton in October, riding his children's ponies before getting back on board thoroughbreds in preparation for his return.

After claiming his first jockeys' championship this year and subsequently landing the job as Sheikh Hamdan Al Maktoum's number one rider, Crowley is now eager to get back in the action and says he is as fit as he can be without race-riding.

Crowley, who has four rides at the Surrey track before heading back to Kempton for three mounts, told Sky Sports News: "I thought I'd have a nice easy day coming back, I wasn't expecting so many rides but I've got to start somewhere.

"I was laid up for a few weeks, I took a bit of a bashing. I started off riding my children's ponies then moved on to the bigger ones. Now I'm back riding out, I've been in the gym and I'm really looking forward to it."

While Crowley prepares for his comeback, Tylicki remains in hospital as he continues to receive treatment for the life-changing injuries he sustained and the champion jockey says the stricken rider's attitude in coming to terms with his injuries has inspired him.

Crowley has visited Tylicki in hospital and has kept in regular contact by telephone and said: "He's remarkable, he's very strong willed and determined. It's an inspiration how he's handled it."

Crowley insisted he has not given up hope of retaining his crown, despite the new demands of being a retained rider.

"Willie Carson was champion when he was retained, so it's certainly not impossible. I'll do my best to retain it but riding for Sheikh Hamdan is my priority."

FIRST PUBLISHED 1:46PM, DEC 13 2016
I thought I'd have a nice easy day coming back, I wasn't expecting so many rides but I've got to start somewhere