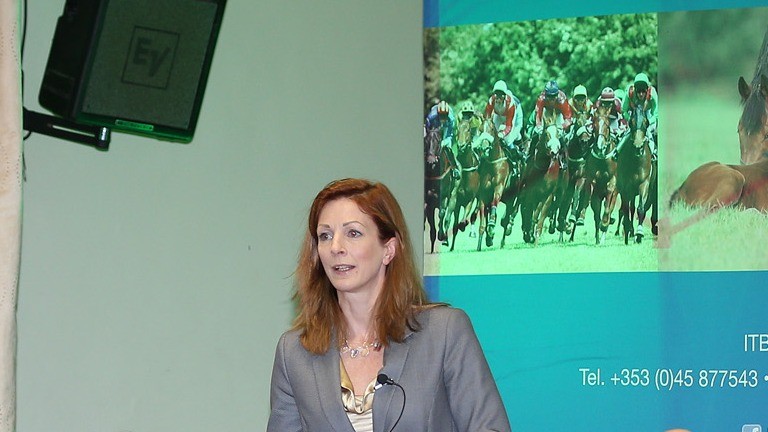 The IHRB chief veterinary officer Dr Lynn Hillyer says the anti-doping message is still not being heard clearly enough
Caroline Norris (racingpost.com/photos)
1 of 1
By Richard Forristal UPDATED 11:29AM, MAY 31 2019

The anti-doping message is still not being heard properly, according to the Irish Horseracing Regulatory Board's chief veterinary officer Dr Lynn Hillyer, as the organisation next month begins the task of wading through eight outstanding positive cases.

Five investigations remain outstanding from 2018, and their conclusions will take the number of doping breaches for the calendar year to 27, a 440 per cent hike on 2017.

There are also now three pending cases from the first five months in 2019. Although Hillyer would not discuss specifics, at least one cobalt case is among the eight outstanding breaches, which are understood to include transgressions from both the track and point-to-point sectors.

"When we have positives still coming through I'd agree that the message is not getting home," Hillyer said. "Positives happen, but I would rather we didn't have them, particularly after the efforts we've made."

Apart from reinforcing the zero tolerance message for performance-enhancing substances, the seminars were also designed to educate trainers as to how to avoid innocuous breaches with permitted medication or supplements by providing guidelines on withdrawal and detection times.

Hillyer did not want to comment on whether any of the outstanding cases were of the more sinister variety.

"We have already committed to providing more information," she said as to how the IHRB plans to address the ongoing issue. "I'm not sure more roadshows is the way to do it, maybe we should go via the IHRB website or other means.

"We are getting a lot of calls from people asking questions about detection times and withdrawal times. Often I wouldn't know the identity of the person calling and if people want to remain anonymous that is absolutely fine.

"The important bit is that people understand where the boundaries are, and that's where the communication comes in. People need to ask for advice, if they have any doubt."

She added: "One thing we have done is built in an anti-doping component to the trainers' course at RACE, and we've done two sessions there already for new licensees coming in."

The alarming spike in positives last year coincided with the regulator's cessation of longstanding ties with BHP Laboratories in Limerick in February 2018 at a cost of around €500,000.

Since then, the IHRB has been using the LGC lab in Newmarket, which is expected to be announced as having won the tender for the long-term contract in a matter of days or weeks.

FIRST PUBLISHED 4:51PM, MAY 30 2019
Positives happen, but I would rather we didn't have them, particularly after the efforts we've made