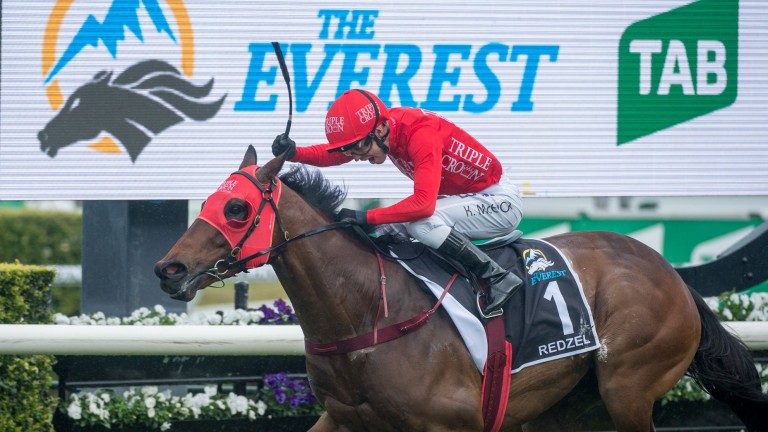 The Everest, Australia's richest race, cannot yet claim much shared history with the Melbourne Cup, but it does share the distinction of repeat winners of its first two runnings after Redzel led all the way under Kerrin McEvoy at Randwick on Saturday.

Archer won the first two Melbourne Cups in 1860 and 1861, and no result other than a repeat success for 2017 winner Redzel looked likely in the second Everest, in which the Aidan O'Brien-trained US Navy Flag could manage only ninth of the 12 runners.

Drawn in stall one on rain-softened heavy ground, McEvoy bagged the rail and was untroubled on the front early on in the six-furlong A$13 million (£7m/€8m) contest.

He was last off the bridle, and for all Trapeze Artist closed in the last 100 metres there was no realistic prospect of him reining in Redzel, who prevailed by a length.

He's done it!
Redzel defends his title in #TheEverest with a dominant pillar to post performance. All hail the champ! pic.twitter.com/kmd34QJf77

The Godolphin-owned Osborne Bulls, trained by James Cummings, a replacement during the week for the same connections' Home Of The Brave, got no luck and ended up coming down the stands' rail under Tommy Berry as he finished strongly to be third.

US Navy Flag was a little slowly away under Ryan Moore. He recovered fairly quickly to race in midfield on the rail but was struggling from halfway and was beaten ten lengths.

McEvoy said: "It's such an electric feeling. I was happy there was a bit of rain around. It was similar to last year, really. Last year we had a bunny but this year there were a few scenarios and from box one that was plan A: control it from the front, and the horse was able to do that. He's a joy to be part of."

James Bester, Coolmore's bloodstock adviser in Australia, said of US Navy Flag: "He missed the break and it was always going to be difficult from there. He tried hard, but the ground wasn't to his liking and he finished a very tired horse."

FIRST PUBLISHED 6:40AM, OCT 13 2018
Last year we had a bunny but this year there were a few scenarios and from box 1 that was plan A