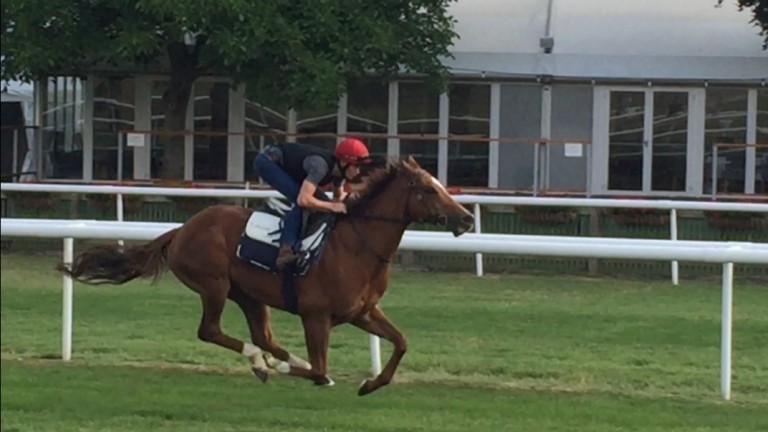 Connections of Aussie sprinter Redkirk Warrior feel their candidate has a better chance of landing Saturday's Group 1 Darley July Cup as he will not be racing 'Sydney way' at Newmarket's July course.

The seven-year-old finish a disappointing tenth under Frankie Dettori in the Group 1 Diamond Jubilee at Royal Ascot last month when well fancied, but he looked in top shape when reunited with regular partner Regan Bayliss in a workout at Newmarket's summer venue on Monday morning.

Trainer David Hayes's son Ben was on hand to supervise the five-furlong exercise and had an interesting theory into why the general 12-1 chance ran so badly at the royal meeting.

He said: "Redkirk Warrior is never the same horse at home if he races what we call Sydney way, which is right to left. He's only ever shown his best form when racing left to right, so maybe that was a factor.

"He was on the wrong leg from the off at Ascot and what was really frustrating was that Merchant Navy won it and we'd beaten him at Flemington the time before. We've had him checked out since then and couldn't find anything amiss."

Bayliss, 21, is visiting Europe for the first time and said after the workout: "It's my first time here, it's a beautiful track and there is obviously a lot of history around the place.

"I haven't seen Redkirk Warrior in a while. He worked very well and it's good to be able to have a look at track as there are no tracks like this back home. He stretched out nicely and I couldn't be happier.

"He seemed to handle the undulations well and he's pulled up well. If he brings his A game he could win it, make no mistake."

FIRST PUBLISHED 11:17AM, JUL 9 2018
Redkirk Warrior is never the same horse at home if he races what we call Sydney way