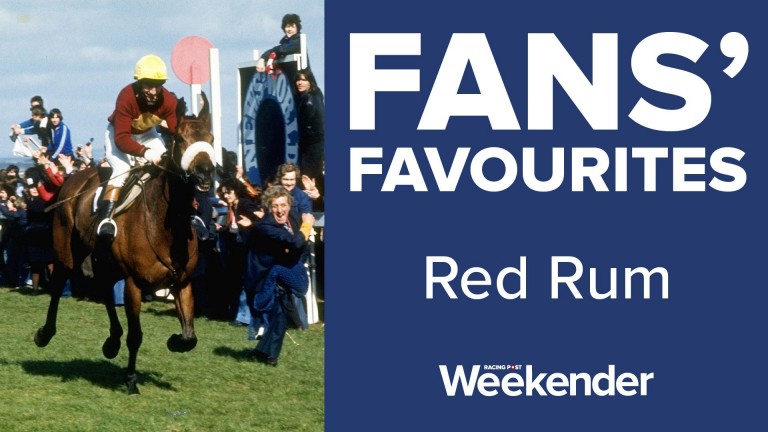 With the word ‘legend’ arguably the most misused in 21st century life, describing Red Rum as one does him a huge disservice.

Perhaps ‘icon’ better sums up the incomparable three-time Grand National hero who will forever live in the public consciousness due to a combination of his record-breaking achievements on the track in the mid-1970s allied to numerous headline-grabbing appearances in retirement.

Red Rum, who was Flat-bred and dead-heated on his debut over 5f at Aintree, rescued the world’s most famous race – which was in real danger of dying – with his exhilarating exploits over the fearsome fences between 1973-77.

Trained on the sands of Southport by local car dealer Ginger McCain, Red Rum was embraced by the public after defeating Crisp in one of the most famous Grand National finishes of all in 1973.

More than 20 lengths clear after jumping the second-last, Crisp still held a ten-length advantage at the Elbow, but was leaden-legged by this stage and Red Rum’s dramatic late charge saw him get up in the final two strides. 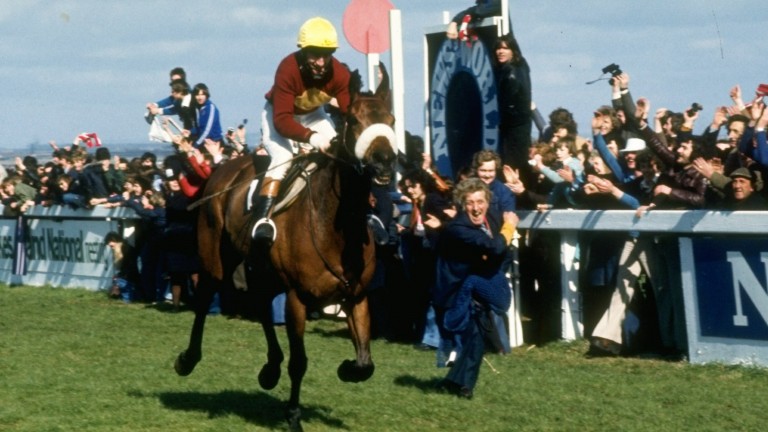 The following year he had the race in safe-keeping from three out and galloped on relentlessly under a crushing 12 stone to defeat the 1970 and 1971 Cheltenham Gold Cup winner L’Escargot.

Just a fortnight later he won the Scottish Grand National, and remains the only horse to win both races in the same season.

By now a national treasure, Red Rum finished runner-up at Aintree for the next two years before his crowning glory, the time he reached iconic status.

There’s no better way of describing the finish to the 1977 National than Sir Peter O’Sullevan’s BBC commentary: “The 12-year-old Red Rum, being preceded only by loose horses, being chased by Churchtown Boy. You’ve never heard a reception like it at Liverpool. Red Rum wins the Grand National.”

Already a celebrity, he helped open the Steeplechase roller-coaster at Blackpool Pleasure Beach later in 1977, and also switched on the Blackpool Illuminations.

He was even a studio guest at the BBC Sports Personality of the Year that December, where he captivated an entire nation by recognising the voice of his rider Tommy Stack, who was appearing via video link from another location.

Red Rum retired the day before the 1978 National. It was the lead story on the BBC nine o’clock news and made the headlines of all the papers.

He died in October 1995, aged 30, and was buried at the winning post at Aintree. 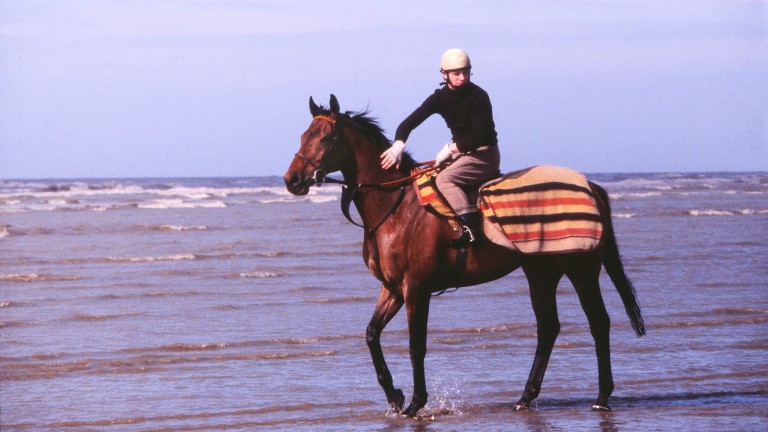 McCain’s son, Donald, says: “Red Rum was at Dad’s yard for as long as I can remember. He was part of the family and lived in the first box outside the kitchen window. It was a case of Red Rum first, kids second.

“I was six when he won his last race. My first real memory is of being sat watching his last National round at my grandmother’s as I wasn’t allowed to go to Aintree.”

Nowadays people love to find fault with racing’s superstars, but everyone loved Red Rum. It was a different culture back then.

McCain agrees. “The Grand National is the people’s race, it’s not the purists’ race like the Gold Cup. It’s the toughest test of the thoroughbred. That’s why everybody loved Red Rum.

“It was something to celebrate when a horse could jump round those big fences in the way he did so many times.

“And he was trained behind a car showroom on the beach in Southport. It was a great story.”

The sheer height of some of the fences, notably Becher’s Brook and The Chair, plus the breadth of the ditches would leave the hairs on the back of people’s necks standing up as the horse approached them. Yet in five years of jumping them, Red Rum never turned a hair.

“Red Rum lived for jumping those big fences. It was the only thing towards the end of his career which lit him up,” McCain reveals.

“He was like a cat, and never looked like falling in five Grand Nationals. I think he pecked once at Valentine’s, but that was all. His jumping was so measured and accurate.”

Many pigeon-hole Red Rum as a great horse at Aintree, but he also produced some high-class performances at other tracks.

“He wasn’t just an Aintree great,” McCain says. “He was a very good racehorse away from the National. He was beaten a short head by Red Candle in the 1973 Hennessy Gold Cup at Newbury, and took the Scottish Grand National in 1974 just two weeks after winning at Aintree.”

After his retirement, Red Rum became a regular at opening fetes and betting shops and taking part in charity functions.

“When Red Rum went for a walk round town he would go sideways down the high street because he knew people were watching him,” McCain says. “He was a big show-off.

“I went to one of the last things he ever did, which was to open a betting shop. The doorway to the bookmakers was only three-quarters open, and I thought, ‘He won’t be able to get through there.’

“Red Rum looked at the doorway, knew he was getting all the attention, and squeezed his way inside. He loved it.”

The considerable modifications to the Grand National course mean that the big race is now a totally different test from what it was during the halcyon days of Red Rum.

As such, comparisons with the achievements of Tiger Roll, who was to attempt to equal Red Rum’s three National wins next month before the Covid-19 pandemic emerged, must be viewed with a measure of scepticism.

McCain, a big fan of Tiger Roll, says: “It’s a pleasure to watch Tiger Roll at Aintree but there is no comparison with what Red Rum did. The course is very different now. It’s a totally different test.

“Tiger Roll is now the most efficient jumper you’ll see of a modern-day Grand National. But it’s so different to what it used to be. You can flick through the top of the fences now, and it doesn’t matter. Back then you’d be on the floor.

“But it’s a pleasure to watch Tiger Roll. He’s great for the race and the sport."

Star's exploits helped to save the National

In the mid 1970s the Grand National was dying. Back then it was widely assumed that every running could be its last.

In 1973 the course had been sold to property developer Bill Davies, who duly tripled the admission prices at Aintree.

As a result, when Red Rum finished second to L’Escargot in 1975 the attendance was the lowest in living memory.

If it hadn’t been for Ladbrokes, and primarily the work of their PR supremo Mike Dillon, there is a strong likelihood the great race would have ceased to exist by the end of the 1970s. 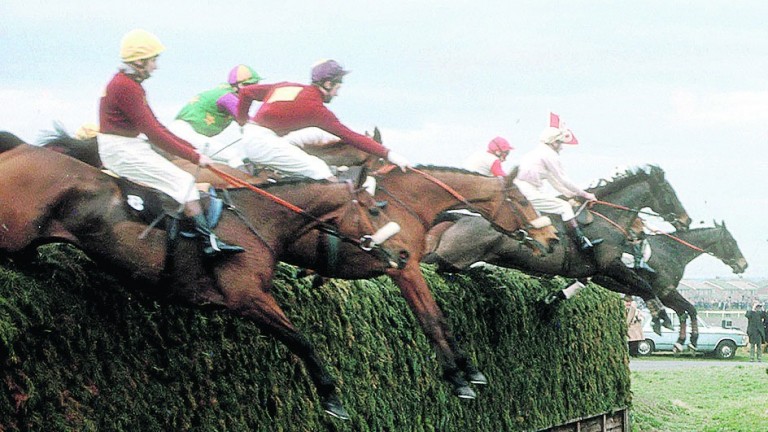 “We [Ladbrokes] took over the running of the Grand National in December 1975,” Dillon recalls. “We had a management contract of seven years to run the race.

“Attendance had been very meagre in 1975 and the course had been allowed to go to rack and ruin. We had three months to get it back in shape.”

He adds: “It was clear that if you could get access to Red Rum then you had a chance of building up the profile of the race, and we were very lucky that Ginger McCain was so supportive.

“At that time Liverpool FC were winning everything. They were the number one act in town. Fortunately their captain, Emlyn Hughes, was very keen on racing, and we managed to combine the two to raise the Grand National’s profile again.

“We did things like getting Red Rum and Emlyn photographed at Becher’s Brook. And it worked.”

It was almost as if Red Rum had read the script when he made history in 1977. “That was a great day in 1977 when Red Rum won his third National,” Dillon says. 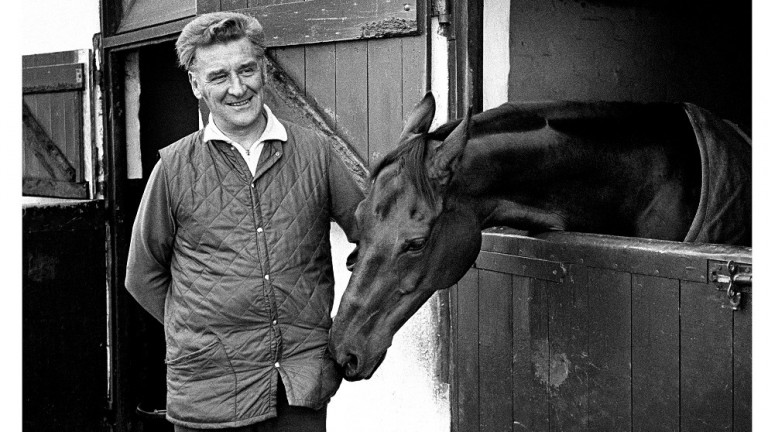 “Ginger also very kindly let him lead the parade for the 1978 race after he had been ruled out on the eve of it.

“You have to say it was a major stroke of luck that we had Ginger. We used him and Red Rum in all sorts of ways.

“Red Rum switched on the Blackpool Illuminations, opened fetes and betting shops. He took on a new way of life after he had finished racing. He loved people, and they loved him.

“Ginger and Red Rum did more than anyone could have dreamed of to safeguard the future of the race.”

Dillon says: “At the height of his fame Red Rum transcended racing. The most amazing thing he did was at the BBC Sports Personality of the Year in 1977.

“His horsebox pulled up at the broadcasting studios in London, he walked out and got into a lift. When he got out he could hear Tommy Stack, his former rider, who was talking via telephone in the nearby studio.

“He pricked his ears and started looking for him. He remembered the voice. Red Rum was just different. He was a one-off.”

Yet for all his appearances as a celebrity after his retirement, Red Rum will forever be known primarily for his unique ability over those formidable fences.

“To jump all those fences for five years and never fall was the most remarkable achievement,” Dillon says. “He also finished second to a dual Gold Cup winner in L’Escargot giving him weight.

“He was a remarkable horse.”

Even if Tiger Roll manages to equal Red Rum’s achievement of three Grand National triumphs in the future, he will still have a long way to go to generate as much affection and hero-worship from his adoring public.

Quite simply, there will never be another like Red Rum.

Lough Derg: a streetfighter who was hard not to fall in love with

Faugheen: Why 'the machine' will be a very, very hard horse to replace

La Landiere: the super mare who went from forgotten to fondly remembered

Un De Sceaux: 'You're going to go a million miles an hour into a fence – do not move'

Speredek: the gallant front-runner who wore his heart on his sleeve

Long Run: the electrifying star in a golden age of chasing

Lil Rockerfeller: versatile, talented and always ready to give it his all

Reve De Sivola: the Long Walk king with the heart of a lion

FIRST PUBLISHED 1:00PM, FEB 16 2021
He took on a new way of life after he had finished racing. He loved people, and they loved him

Kingman: 'There are some in the camp who think he'd have beaten Frankel' Brando: 'Kevin always maintained he was going to turn into a right beast'