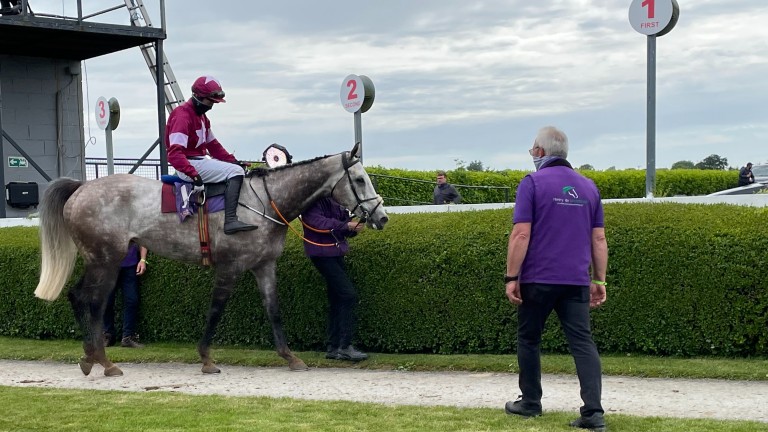 Conditional Mike O’Connor is making hay while senior riders are on holiday this month, with his boss Henry de Bromhead in irrepressible form.

The pair combined again as the grey Cavalry Master got the better of a thrilling duel with fellow Gigginstown-owned gelding Star Max in the 2m4f novice chase, the first leg of a double for the rider.

The son of Milan was never out of the first two in a race run at a strong gallop, and from the second-last it was nip and tuck between them, with O’Connor’s mount prevailing by half a length.

“It seemed a strong enough contest," said O'Connor. "We went a nice gallop and I was trying to get breathers into my fellow the whole way. He got a good jump at the last and he put his head down and battled the whole way.”

The jockey doubled up in the following handicap chase on the Seamus Braddish-trained Brogine, which was a spare ride after Cathal Landers was stood down for the day following an earlier fall.

O’Connor was one of a number of riders who were heading to Navan to take up further mounts. The track is more than a two-hour drive from Wexford.

The lady riders’ championship could almost be over with just a month of the season gone as Jody Townend moved her tally for the season to seven – six clear of her nearest rivals – when landing the 2m4½f ladies’ handicap hurdle on Klassy Kay for Willie Mullins.

The daughter of Presenting bounced back to form to win by six and a half lengths, giving Townend her first winner over jumps for her boss.

"She was very good," the winning rider said. "She jumped like a buck for me and kept herself in the race with her jumping. “It’s only my second ride over jumps for Willie and it’s great to get one on the board."

FIRST PUBLISHED 6:00PM, JUN 16 2021
He got a good jump at the last and he put his head down and battled the whole way

Dynamite night for McNamara as Jazzaway leads Mullins charge in feature How a ping-pong rout told me everything about the extraordinary Patrick Mullins Fan De Blues follows in some famous hoofprints to win Grade 3 novice chase 'She'll be a big player in the Cesarewitch' - five who caught the eye at Galway 'It's incredible to think I've won it twice' - can Patrick Mullins do it again? Hopes high of strong European team for Spring Carnival despite veterinary checks