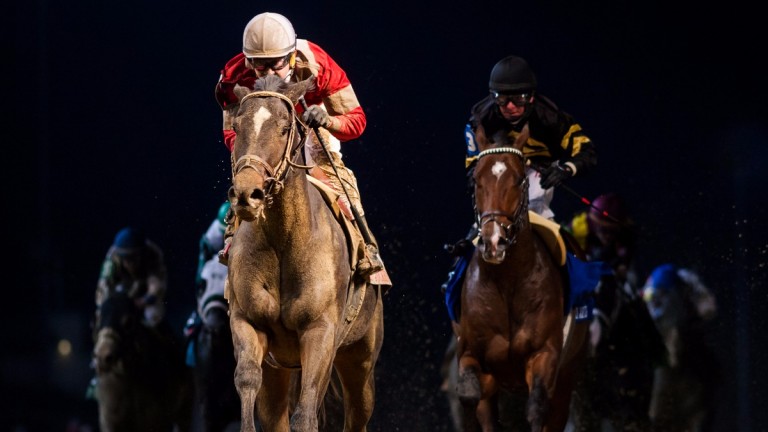 McCraken: faces six rivals as he bids to take his unbeaten record to five
Matt Wooley/EquiSport Photos
1 of 1
By Nicholas Godfrey 6:00PM, APR 7 2017

Headed by ante-post favourite McCraken, no fewer than four of the top eight in the Kentucky Derby betting meet at Keeneland in the Blue Grass Stakes on a crucial Saturday programme chock-full of final Classic preps in California, New York and Kentucky.

With a plethora of Grade 1s plus a multitude of lesser stakes, there are any number of well-known names in action across the country.

Ironically, however, the Blue Grass has lost its Grade 1 status for 2017 – yet the $1 million contest has attracted its strongest field for a decade, headed by McCraken (Ian Wilkes/Brian Hernandez), whose status as Kentucky Derby favourite was severely tested last weekend when Always Dreaming ran away with the Florida Derby.

Now the undefeated son of Ghostzapper is playing catch-up to some extent, having beaten Blue Grass rival Tapwrit in the Sam F Davis at Tampa on his seasonal debut only to miss the Tampa Bay Derby with an ankle strain.

McCraken breaks from gate two in a seven-runner field as he bids to take his unbeaten record to five in a race his trainer is adamant does not represent the be-all and end-all. "The goal is the first Saturday in May and he doesn’t have to win this race," said Wilkes.

"I don't want to put that pressure on the horse. If he gets the right race and moves forward, we'll be fine," he added. "How often does a horse like this come along? You have to have fun with it, but you can’t get ahead of yourself. You have to take it one day at a time."

A length and a half behind McCraken in the Sam F Davis, Tapwrit (Todd Pletcher/Jose Ortiz) gave notice of his own Derby pretensions when overcoming a wide trip before drawing away to win the Tampa Bay Derby by four and a half lengths. His trainer is looking for a record fourth victory in the Blue Grass.

Others taking high rank in Derby betting are J Boys Echo (Dale Romans/Robby Albarado), who won the Grade 3 Gotham in New York on his latest start, and Practical Joke (Chad Brown/Joel Rosario), a dual Grade 1 winner at two before coming third in the Breeders' Cup Juvenile. A promising second behind Gunnevera on his three-year-old debut at Gulfstream Park, he breaks from the outside post here.

The career-threatening injury suffered by Mastery as he won last month's San Felipe has left the west coast Classic division in disarray, resulting in a double-figure field for this $1m contest, which has produced two of the last five Kentucky Derby winners in I'll Have Another (2012) and California Chrome (2014).

Mastery's trainer Bob Baffert still saddles three horses as he bids to add to his record seven victories in Santa Anita's top race for three-year-olds. American Anthem (Martin Garcia) looks the pick of them, though a dismal effort last time at Oaklawn needs to be forgiven.

Doug O'Neill, who trained I'll Have Another and last year's Kentucky winner Nyquist, goes one better than Baffert with four runners, headed by likely favourite Iliad (Flavien Prat), second to Mastery on his latest start.

"If Mastery was in the race, he'd be the favourite, so because Iliad ran second, he's the logical favourite, and I think he's a legitimate favourite," O'Neill said.

John Shirreffs has a double entry with Gormley (Victor Espinoza), who won the FrontRunner here as a two-year-old, and Grade 3 victor Royal Mo (Gary Stevens).

Holy Bull Stakes winner Irish War Cry (Graham Motion/Rajiv Maragh), who blotted his Derby copybook last time out when unable to dominate in the Fountain of Youth, has a chance of redemption in this $750,000 contest – like the Blue Grass, downgraded this year.

"Obviously, he's going to have to step up and be competitive on Saturday otherwise he doesn't belong doing this – and I'm not going to force it to happen," Motion said.

Paulassilverlining (Chad Brown/Jose Ortiz), bought privately as a broodmare prospect for Juddmonte, bids for her first Grade 1 success as she makes her debut for Khalid Abdullah's team. Four times a Graded stakes winner at a lower level for former trainer Michelle Nevin, she was also third in the Breeders' Cup Filly & Mare Sprint.

None of the nine runners has won a Grade 1 before but Unified (Jimmy Jerkens/Javier Castellano) has at least won four of his first five starts and beat subsequent Dubai Golden Shaheen winner Mind Your Biscuits on his most recent outing in Florida.

Miss Sky Warrior (Kelly Breen/Paco Lopez), who won the Grade 2 Davona Dale at Gulfstream last time out, heads New York's Kentucky Oaks trial as she bids to complete a five-timer. Rails-drawn Yorkiepoo Princess (Edward Barker/Irad Ortiz) has made hay on the inner track over the winter.

FIRST PUBLISHED 6:00PM, APR 7 2017
The goal is the first Saturday in May and he doesn’t have to win this race