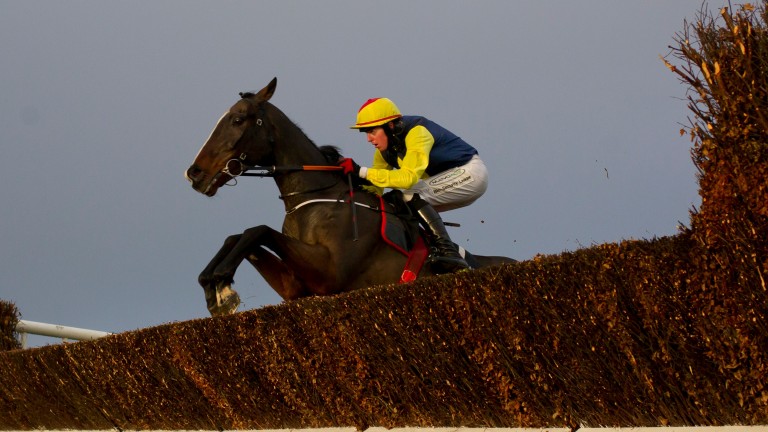 Realt Mor attempts to back up his Down Royal success of a week ago at Cheltenham this afternoon
Patrick McCann
1 of 1
By Scott Burton 6:00PM, NOV 10 2016

A race that has been inserted into the programme at short notice – owing to the ground on the cross-country course being too firm to use – meaning that a couple of in-form candidates come here off a short turn around.

Realt Mor did his winning at Down Royal last week over two miles but won twice over this trip as a novice in 2013, including the Grade 1 Powers Gold Cup at Fairyhouse.

Ericht had no answer to Sandy Beach at Newbury eight days ago but finished well clear of his remaining rivals on what was his first start since May.

Topweight, Shuil Royale, is the other runner in the race to have won last time out when landing a similar contest at Aintree over three miles and a furlong.

Eastlake was pulled up in that race but proved he is no back number when landing the Topham over the Grand National course in April.

Bennys Mist finished a long way behind Eastlake in the Topham – his most recent start – but had previously pushed Sametegal hard in the Greatwood Gold Cup at Newbury.

Astracad ran well to be fifth over two miles in the Jenny Mould Memorial Chase at this meeting 12 months ago and has a decent sixth-placed effort in the Byrne Group Plate on the New Course in the interim to recommend him.

Does Storm have stamina to offer?

Dunraven Storm has nine victories from 32 starts but remains largely unexposed at this trip. His record at two miles two furlongs plus reads 4183F1.

Harry Fry, trainer of Shuil Royale
He's an 11-year-old off a career-high mark and it would be extraordinary to think he could continue improving at his age. But he ran very well last time. It's a slight drop in trip but we felt that running against the other veterans was a bigger positive, while the trip is less of a concern. The ground is perfect as it is and, as long as the forecast stays where it is, we’ll be very happy.

Philip Hobbs, trainer of Dunraven Storm
The old boy is in very good form and wants decent ground so hopefully it won't be too soft for him.

Gordon Elliott, trainer of Realt Mor
He won well at Down Royal last Friday and came out of it in good form. We decided this would be a suitable opportunity for him. He's had plenty of problems in the past, and is a bit of a monkey, but he's always had ability.

Nicky Henderson, trainer of Ericht
He ran at Newbury last week and ran very well, but if I had known this race was coming I wouldn't have run him. The conditions are so good for him here that he has to come in again. He seems in great form.

Nigel Twiston-Davies, trainer of Astracad
I hope he's pretty straight. I'm sure he'll improve for the run but I hope he might be fit enough. We're hoping he's down to a workable mark.

Neil Mulholland, trainer of Danimix
I'm very happy with him and I think he has improved a lot for his last run. He looks fantastic and, although a stiffer test of trip might be better for him in time, he's in good order and hopefully can get some of his old sparkle back.