Reach for the shortbread: this is a super Sunday not to be missed

David Jennings on a feast of racing action to savour 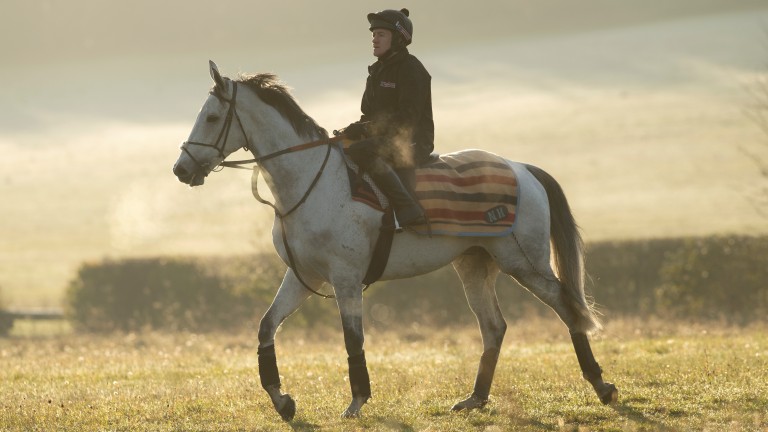 Simonsig: there are few finer sights in racing than watching the gorgeous grey soar over fences
Edward Whitaker
1 of 1
3:09PM, NOV 13 2016

Sundays were not always like this. Remember being trotted off to church, miming a few hymns and visiting your long-lost relation who only had rotten Rich Tea biscuits in the cupboard? By the time Poldark came on, silence swirled around the sitting room with thoughts already turning to Monday morning.

There wasn't even racing in Britain on a Sunday until 1992. So fed up was everyone of their usual Sunday rituals that 23,000 people turned up at Doncaster for the first Sunday serving. And they couldn't even have a bet! When Morley Street got the better of Granville Again and Oh So Risky in the Elite Hurdle on this day 24 years ago, none of them had an SP. Perish the thought.

But all those Sundays without having a wager, all those Sunday spent praying, visiting and being bored stupid were worth it because today you get your reward. You finally have a Sunday to savour and don't you dare reach for the Rich Tea to dunk into your tea. This is a day for luxury shortbread.

The Cheltenham curtain is raised at 12.45 and missing the opening act would be very foolish indeed. It is round two between Moon Racer and Ballyandy and, judging by the bruising battle the pair fought at Perth, this is a bout not to be missed. The last two winners of the Champion Bumper at Cheltenham are heavyweights in the novice hurdling division and victory for either might see them sit at the top of the Supreme market by the end of the day.

Thirty-five minutes later Paul Nicholls tries to win the Racing Post Arkle Trial for the sixth time since 2008. The champion trainer relies on Le Prezien, who was snapped up by JP McManus for 290,000 quid in May at the Goffs Doncaster sale.

It might sound like a lot but he is only five, got pretty close to Yorkhill at Aintree and his chasing debut at Uttoxeter was hugely encouraging. No wonder he is odds-on to beat off a two-pronged attack from the Henry de Bromhead stable. Three Stars and Some Plan are no mugs, though.

You don't have long to contemplate Le Prezien's Arkle credentials afterwards as the Shloer Chase is scheduled for 1.55. There are few finer sights in racing that watching the gorgeous grey Simonsig soar over fences but we have been deprived of it for most of the last three years.

Today is only his fourth appearance since winning the Arkle in 2013 and, while victory might not match how Nicky Henderson felt when Sprinter Sacre won the race last year, it would certainly transport a wide smile to his face. Now that would be a proper training performance.

Ah, the Greatwood. It never fails to entertain. Remember Rooster Booster winning it in 2002? Of course you do. He was a nobody back then but he quickly became somebody. Khyber Kim almost did the Greatwood-Champion Hurdle double too while Clondaw Warrior, now rated 151 and 108 on the Flat, could not win it in 2014 off a lowly mark of just 121. It takes a bit of winning, you know.

Winter Escape only knows winning. He is three from three and his Dovecote display suggests he is a top-notch hurdler masquerading as a handicapper. The problem is that punters think so too and he could go off 5-2 or shorter. He will need to be every bit as good as we all seem to think he is.

Unowhatimeanharry won the conditional jockeys' handicap hurdle last year en route to landing the Albert Bartlett at the festival so you will have to watch that too. You watched Ballyandy win the concluding bumper last year so, who knows, you might see a future star today too.

Cheltenham is all class but Fontwell is where the battle-hardened stayers are at it. The Totepool Southern National took seven minutes and 29 seconds last year so you will certainly get value for money if you have a bet in it today. You might get even better value if you back Fergal Mael Duin. He looks tailormade for such a gruelling test.

Don't forget Navan either. The lovable Ballycasey bids for Fortria glory, while dual Grade 1 winning juvenile Jer's Girl takes on RSA runner-up Shaneshill among others in the Lismullen Hurdle. It is quality stuff.