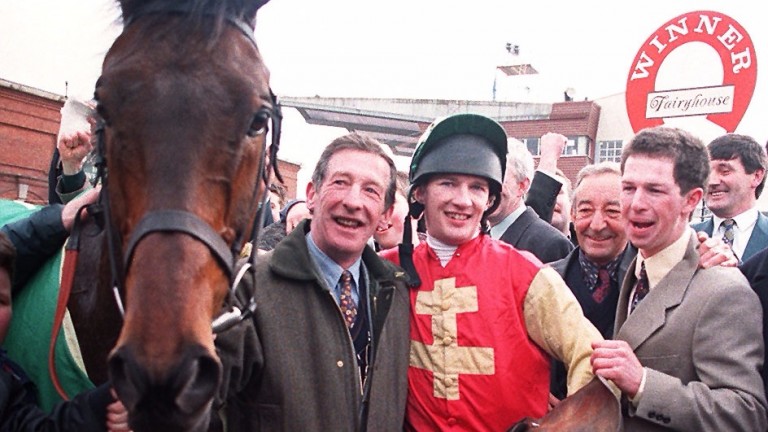 Ratoath is close to the Carberry home at Ballybin and the church was packed to overflowing, with the congregation hearing Father Ludlow quote St Paul’s words "I have fought the good fight, I have finished the race, I have kept the faith", before he spoke of Carberry’s stellar career in racing, mentioning many aspects including the stiff challenges which Aintree presents for jockeys.

On a sunny, warm day, the coffin was carried into the church from the funeral home across the road by Carberry’s five sons Thomas, Paul, Philip, Mark and Peterjon and his daughter Nina, who were the chief mourners along with their mother, Pamela, and Carberry’s sisters Anna and Bess.

All sectors of the racing community were well represented among the large attendance, which included many friends of the deceased.

Among the trainers who attended were Jim Dreaper, for whom Carberry won two Irish Grand Nationals on Brown Lad and a Cheltenham Gold Cup on Ten Up, Noel Meade, Ted Walsh, whose son Ted jnr is married to Nina Carberry, John Queally, Paddy Griffin and Sean Treacy.

Ian Renton, chief executive of Cheltenham racecourse, travelled over from Britain, but due to flight difficulties Nigel Payne was unable to travel and instead Aintree, scene of some of Carberry's greatest victories, was represented by trainer Arthur Moore, Carberry's brother-in-law.

After the mass, Carberry was carried for burial in Ratoath cemetery nearby.

FIRST PUBLISHED 6:28PM, JUL 16 2017
All sectors of the racing community were well represented among the large attendance, which included many friends of the deceased