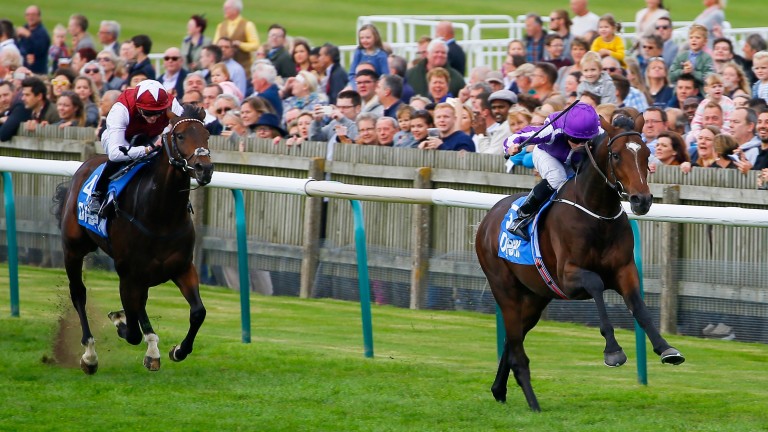 Graffiti Master (left) finishes third to Kew Gardens in the Zetland Stakes
Mark Cranham
1 of 1
By David Milnes 4:20PM, MAY 5 2018

Frankie Dettori gets a rare outing in the maroon and white silks formerly assigned to Sheikh Mohammed in the Listed Havana Gold Newmarket Stakes, in which he partners the returning Graffiti Master.

The son of Dubawi, who now races for Sheikh Mohammed's daughter Jalila, should be doing all his best work at the finish as he needed every yard of this trip of a mile and a quarter as a juvenile, signing off with a third in the Listed Zetland Stakes.

The John Gosden-trained colt, who holds an entry in the Group 2 Queen's Vase, has been a bit slow to come to hand this spring but is now ready to start off in the eight-runner affair.

Gosden said: "Graffiti Master ran well last year but was a bit behind this spring, which is why he's only starting off now.

"He's been working nicely but it looks a tough renewal of the race."

Charlie Appleby was in fine form at the Craven meeting when his eight winners included Old Persian, who won a competitive handicap over this trip off top weight and steps up in class here to take on Graffiti Master.

Appleby, who won this in 2016 with subsequent Group 1 winner Hawkbill, also fields Key Victory, whom stable number one William Buick has chosen to ride.

Old Persian: bolted up at the Craven meeting
Martin Lynch

A winner on debut over a mile on the Rowley Mile at the back-end of last season, the son of Teofilo will probably impress in the paddock as he spent the winter in Dubai.

Appleby said: "This looks the obvious race for Old Persian, who we know loves the track after his win at the Craven meeting.

"We're very pleased with Key Victory and the form of his win at the track has worked out well. He spent the winter in Dubai and he could well be a French Derby type."

Unlike that pair, the David Simcock-trained Highbrow is having his first outing on turf. 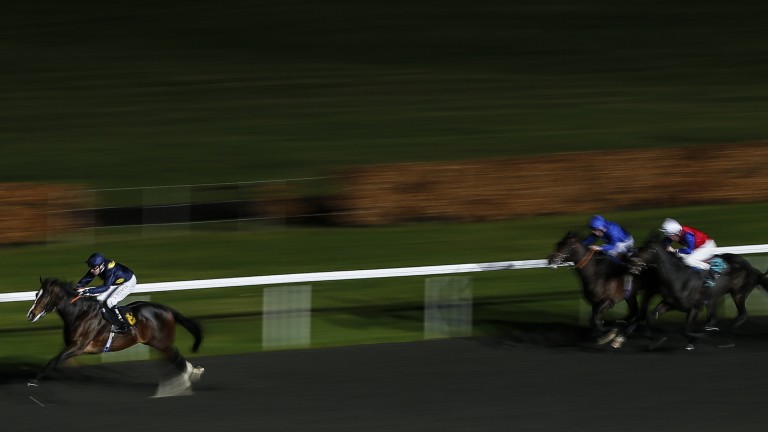 The trainer said: "He's a horse we like. He won well on the all-weather last year, but he's a type that will improve through the year."

Shouldn't be a bridge too far

Earlier on the card Sharja Bridge will be out to improve the sorry record of favourites in the opening Spring Lodge Handicap (1.50), in which no market leader has obliged in the past decade.

The four-year-old carries the colours of Sheikh Mohammed Obaid in the 16-runner contest.

The son of Oasis Dream has not been seen since last September, when just run out of it in a decent handicap at Sandown, but has been working well this spring.

Trainer Roger Varian said: “Sharja Bridge is lightly raced and his form has worked out nicely.

"His homework has been good this spring, the ground will suit and he’s from a middle-distance family on the dam’s side, so the extra furlong should be in his favour.

"With the stalls stands' side and the cut-away in place, I’m happy with his draw in 15.”

FIRST PUBLISHED 6:00PM, MAY 4 2018
Graffiti Master ran well last year but was a bit behind this spring, which is why he's only starting off now