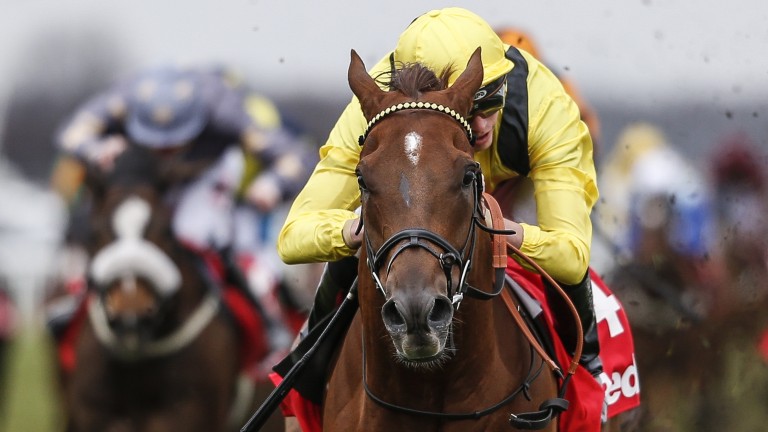 This time last year Addeybb was vying for favouritism in the Lockinge and was being talked about as a potential star player in the miling division.

However, quick ground at Newbury derailed his Lockinge bid and he was well beaten when returning to action in the Queen Elizabeth II Stakes at Ascot on Champions Day in October.

The son of Pivotal, who should enjoy easier conditions in this £126,000 event, was last seen finishing a respectable third in a 1m2f Listed race at Lingfield in November.

William Haggas, who trains the gelding for Sheikh Ahmed Al Maktoum, said: "He's been waiting for rain for months and he'll get his favoured ground. It's not a new trip – he's been over it before – but he's got to stay it, which I think he will.

"He's been in work a long time and it's been a fine balance between keeping him fresh and getting him fit. I'm not convinced he's at his peak, but I think he's in good shape."

Like Addeybb, Irish raider Success Days should relish the ground and is a solid yardstick at Group level.

Ken Condon has booked Ryan Moore, who has won the Huxley five times, and the trainer said: "He'll like the slow ground and the tight track also suits front-runners like him. However, he'll need to show more than he has on his last few starts, which were below par."

Richard Fahey won last year's Huxley with Forest Ranger, who is back for more alongside race regular Gabrial, who is owned by Chester fanatic Marwan Koukash and is having his 90th start at the age of ten.

Gabrial's form in the Huxley Stakes

"Forest Ranger is in great form and the rain won't have bothered him – I hope it will bother them more than us," Fahey said. "I was delighted with his second in the Earl of Sefton at Newmarket last time – that would be as good a run as he's had.

"This is Gabrial's sixth try at winning the race. He always runs well and Marwan was keen to have another go and I can't knock him."

The ground is a slight worry for course-and-distance winner Chief Ironside, who developed into a useful performer last season for William Jarvis and exuberant owner Clive Washbourn.

The four-year-old failed to fire when last seen running over seven and a half furlongs at Tipperary in October.

Jarvis said: "He was disappointing and maybe it was the end of a long season and maybe the wrong trip as well. We'll see about the ground. It's a concern, but he's in good form, this looks a nice starting point and we know he handles the course."

Matterhorn, who has thrived on the all-weather over the winter and this spring, makes his Group debut. Once raced on turf, he has won seven of his nine starts on artificial surfaces, slamming hot favourite Wissahickon in the Easter Classic at Lingfield three weeks ago.

"He faces totally different conditions to what he's been used to and I don't know whether he'll handle them," trainer Mark Johnston said.

"He hasn't done any fast work since Lingfield and nothing on turf since last year."

All of Chester's runners and riders on Friday

FIRST PUBLISHED 6:00PM, MAY 9 2019
He's been in work a long time and it's been a fine balance between keeping him fresh and getting him fit