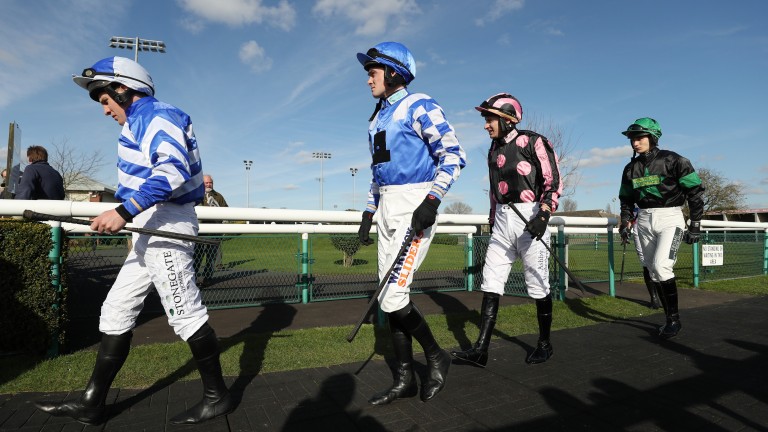 Jockeys: among the estimated five million who are self-employed in Britain
David Rogers / Getty Images
1 of 1
By Graham Dench UPDATED 7:24PM, MAR 26 2020

Racing’s thousands of self-employed and freelance workers face a further anxious wait before learning how the government plans to replicate the support package already promised for those who are employed.

Chancellor Rishi Sunak announced last week the government will step in to help companies by promising to pay employees 80 per cent of salaries – up to £2,500 a month – in an effort to avoid job losses and limit hardship.

However, creating a fair ‘catch all’ system for the self employed – there are understood to be around five million in Britain – is proving challenging, although Sunak insists that the government "absolutely understands the situation that many self-employed people face at the moment" and is "determined to find a way to support them".

Answering questions in the House of Commons on Tuesday, Sunak spoke of the "genuine practical and principal reasons why it’s incredibly complicated to design an analogous scheme to the one that we have for employed workers".

"The ability for the government to distinguish between those people based on tax returns that are over a year and a half out of date poses some very significant challenges in terms of fairness and affordability."

Sunak underlined that the government is looking at the issue "in immense detail and at pace" and promised further announcements about progress on these measures.

Figures released on Tuesday afternoon revealed another startling rise in the number of Covid-19 fatalities in Britain, with the new total of 422 representing an increase of 87 on the previous day. There have now been 8,077 confirmed positive cases, up more than 1,400 on the previous day’s 6,650.

Confirmed cases are approaching 400,000 globally, with deaths near the 17,000 mark worldwide.

Jockeys in Clonmel were isolating on Tuesday, the last day of racing in Ireland until April
Alain Barr (racingpost.com/photos)

The sporting landscape continued to be decimated by the Covid-19 outbreak on Tuesday, with the news that there will be no more racing in Ireland until at least April 19 coming mere hours after it was confirmed that the Tokyo Olympic and Paralympic Games have been postponed until next year.

The announcement followed talks between Japan’s prime minister, Shinzo Abe, and the International Olympic Committee president, Thomas Bach, which established that cancelling the games was impractical and so postponement was the best way forward in these unprecedented circumstances.

A joint statement from the IOC and the Tokyo 2020 Organising Committee said that the Games "must be rescheduled to a date beyond 2020 but not later than summer 2021, to safeguard the health of the athletes, everybody involved in the Olympic Games and the international community".

Business as usual for Godolphin means some small relief for Newmarket

FIRST PUBLISHED 7:19PM, MAR 24 2020
It’s incredibly complicated to design an analogous scheme to the one that we have for employed workers