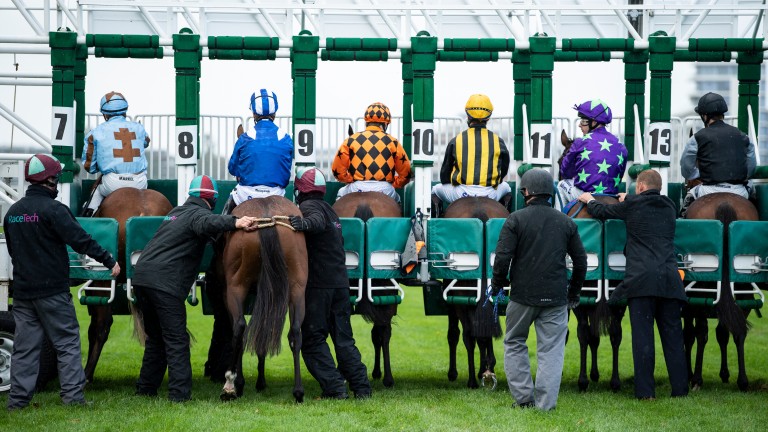 Measures are being put in place to allow for a smooth start to races
Edward Whitaker (racingpost.com/photos)
1 of 1
By Peter Scargill 1:38PM, JUN 7 2020

The BHA on Sunday acknowledged the "huge contribution" made by owners to racing and to supporting the industry through the shutdown, and stated that efforts to get them back on to the racecourse are continuing.

No owners will be permitted to attend racecourses until further notice with strict controls around the number of individuals permitted on racedays. However, the BHA hopes to enable owners to see their horses running live as soon as circumstances allow.

Brant Dunshea, BHA chief regulatory officer, said: "We're absolutely conscious of the importance of owners to our sport and it's a focus for us to look at how, as soon as it's considered reasonably appropriate, we can get owners to the racecourse because of the huge contribution they make."

Despite the return of racing, David Armstrong, chief executive of the Racecourse Association, warned there were still financial challenges with his members having lost approximately £8.2 million a month during lockdown and racing having a net drop in income of around £55m overall.

He said: "We're going to go through a phase of continuing hardship for the sport as we build back towards what might be a normal fixture list and a normal set of income streams. For now, it's a very important first step [to resume] but it doesn’t begin to alleviate the financial pressures across the board."

Monday's meeting at Newcastle will be the first in Britain since March 17 and the first under the new Covid-19 guidelines.

However, Dunshea is confident two trial runs of the procedures at Lingfield last week helped iron out potential problems on racedays, including around pre-race screening, the weighing-in and out process and the stalls.

He said: "We've taken a very strong approach to risk management and put in place measures to manage those risks.

"You will see on a racecourse where, for example with a jockey and a stalls handler, people may come within the two-metre [social distancing] guidance. It’s not that something has gone wrong, it's factored into our approach from the moment they leave until the moment they get home."

For the loading process, there will be hand sanitiser at the stalls, gates will be disinfected and no more than two 'pushers' will be allowed per horse. BHA chief executive Nick Rust said difficult loaders would not be granted extra time by starters as "we can’t have people hanging around for as long [as usual] in close proximity".

Nick Rust: "We have an opportunity as a sport to showcase what we’re all about"
John Grossick (racingpost.com/photos)

Rust declared the sport had a chance to showcase itself and reconnect with people in a way "we haven’t seen for 40-50 years relative to other sports".

Rust, who revealed that a number of people had been unfurloughed by the BHA and that the regulator would be operating with about 75 per cent of its usual staffing levels, said: "We're returning safely and in a way that's responsible. We have an opportunity as a sport over the next few weeks to showcase what we're all about, not just in terms of protocol but just how colourful and exciting our sport is.

"We're going to have coverage that we haven't seen for 40-50 years relative to other sports over the next few weeks, and that is a great opportunity to reconnect with the public."

FIRST PUBLISHED 4:30PM, MAY 31 2020
We’re going to go through a phase of continuing hardship for the sport as we build back towards what might be a normal fixture list

Racing has its problems and it's up to racing to solve them Back to normal? We road-test the new raceday experience Extra money - but less competition and lower crowds: the impact of more racing Communications director Martin Fewell set to leave BHA 'I'll definitely watch it at home' - inaugural Racing League crowd ready for fun Whether you love it or loathe it, the Racing League is ready to roll the dice