Racing's Back! GOOD TO BE BACK 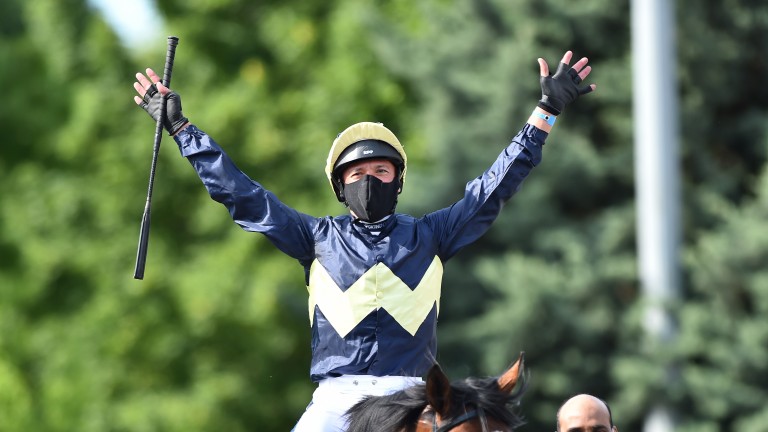 A masked Frankie Dettori celebrates his win on Galsworthy at Kempton
Hugh Routledge
1 of 1
By David Baxter UPDATED 8:07PM, JUN 2 2020

Frankie Dettori described himself as like "a kid at Christmas" prior to having his first ride back at Kempton on Tuesday, and the star jockey wasted no time in getting back in the winning groove.

There will many bigger occasions for Dettori to shine in the saddle over the coming months as racing returns to something resembling normality, but he quickly knocked off any ring-rust aboard Galsworthy in the 1m4f maiden.

Sent off a 4-5 favourite, the John Gosden-trained three-year-old did not have to be asked to do much by Dettori, and the pair came clear to win by four lengths.

A sparse crowd may have greeted Dettori post-victory, but ever the showman, he had his arms wide aloft on the chute returning to the winner's enclosure with his pleasure at being race-riding again obvious.

He said: "It's great to be back. I think my wife was more pleased than me! In two days time I've got Stradivarius, then the Guineas and two weeks today we'll be at Royal Ascot – it's all happening now. Where we usually have a stop and start season it's full on.

"We're the first sport to start and from what I've seen at the moment everything is going smooth and long may it continue. We're a non-contact sport and it's great we've been able to start."

Dettori also revealed he will be aboard Shimmering in Sunday's 1,000 Guineas, not Raffle Prize. "I ride Shimmering for John Gosden now in the 1,000," he said.

"I was going to ride Raffle Prize because we didn't think she'd [Shimmering] get in off her rating, but the race didn't fill and we're running. Stradivarius is in good nick for the Coronation Cup. The Godolphin horse [Ghaiyyath] will be hard to beat but we'll give it a go."

Dettori will have three chances to partner more winners for Gosden on Wednesday, as the third day of British racing's resumption brings with it the Group 3 Unibet Classic Trial and the Listed EBF/Unibet Snowdrop Fillies' Stakes, and the jockey has leading chances in both races.

Hypothetical is Dettori's ride in the Classic Trial, and he added: "The Classic Trial looks a hot little race but it's the first trial so it's bound to be. With Rab [Havlin] riding a winner yesterday [Monday] and me riding one today, we know our horses are running well and I'm looking forward to riding Hypothetical."

Before Hypothetical, Dettori will start his book of rides with Sun Bear in a 1m2f fillies' novice stakes (2.10). Narrowly beaten by stablemate Moonlight In Paris on debut at Nottingham last November, the daughter of Dubawi has a fine middle-distance pedigree and is well fancied to enjoy a winning return under Dettori.

Next for the rider is Hypothetical in the Classic Trial (2.45). A 550,000gns purchase as a yearling, Hypothetical earned Derby quotes of 33-1 after a dominant five-length debut victory at Chelmsford last December and another success on Wednesday would likely earn shorter ante-post quotes for next month's rearranged Epsom Classic.

Completing the trio of chances for Dettori on Wednesday is Scentasia in the Snowdrop (3.55). The daughter of Cape Cross showed a liking for the all-weather at the backend of last year with a brace of Listed victories at Lingfield, the second of which in November came with Dettori aboard.

She appeared a filly on the upgrade when last seen, but will need to be with stablemate and favourite Nazeef seeking a four-timer, while dual Group 1 winner and 2018 1,000 Guineas heroine Billesdon Brook is also among the opposition. 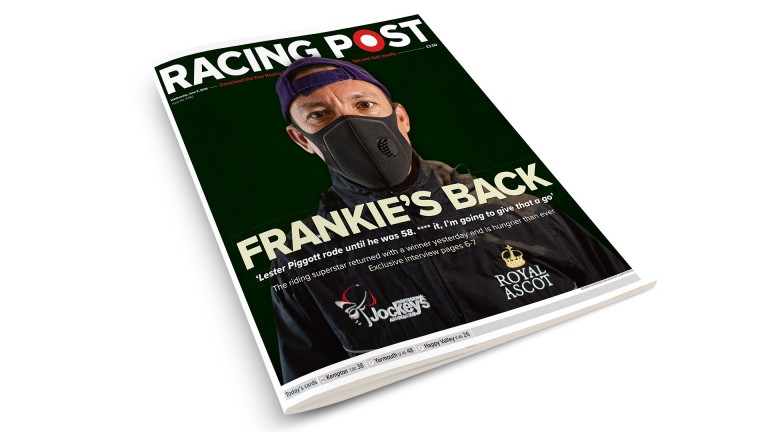 Don't miss Frankie Dettori talking to Lee Mottershead about Enable, the past and the future in Wednesday's Racing Post.  Members can read the interview now

FIRST PUBLISHED 6:29PM, JUN 2 2020
It's all happening now. Where we usually have a stop and start season it's full on