Bookies predict monstrous turnover at Newcastle on a manic Monday 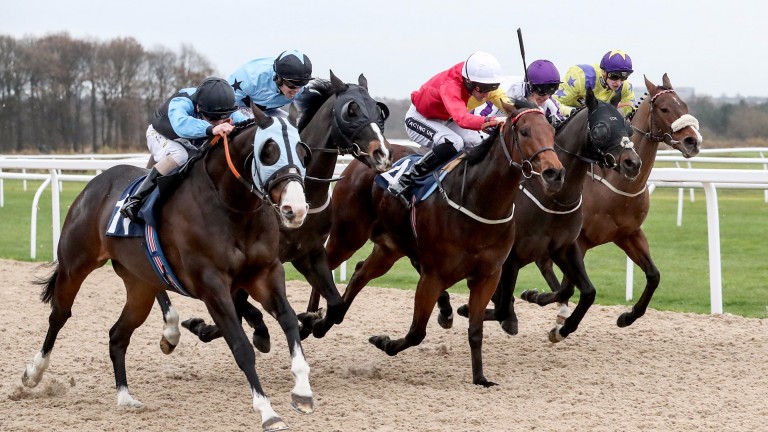 Newcastle: back in action with ten-race card on Monday
John Grossick (racingpost.com/photos)
1 of 1
By Brian Sheerin UPDATED 3:32PM, JUN 1 2020

Bookmakers are expecting a helter-skelter afternoon in their trading towers when racing returns to Britain for the first time in more than two months at Newcastle on Monday, with turnover predicted to outstrip anything seen before for an all-weather meeting in the country.

For punters it will feel something like cows being let out to pasture in the first days of spring after two months cooped up in sheds.

Some will approach racing's return by throwing caution to the wind, buck-leaping back into action as if they were never gone, and Betfair spokesman Barry Orr is predicting monstrous turnover on the ten-race card that begins at 1pm.

He said: "It's a cracking card to kick off what will undoubtedly be an extraordinary summer of Flat action, and from a Betfair Exchange perspective, even allowing for the nature of the card, Newcastle should easily break the previous all-weather matched volume record which was set at the inaugural AW Finals day, the first Good Friday on which racing was allowed in the UK, in 2013."

Such comments were echoed by Paddy Power's Paul Binfield, who forecast betting activity would be nothing like a normal Monday.

He said: "The early markets have been nothing out of the ordinary, but we’re expecting them to be brisk enough and liven up on Sunday evening and into Monday.

"We're pretty sure it's going to be busy – punters haven't had any domestic racing for a couple of months now and turnover will definitely be a lot higher than normal on a Monday on the all-weather at Newcastle."

Although international action has kept the lights on at Ladbrokes, according to McGeady the return of British racing will prove a boon for the bookmakers.

She said: "We're thrilled to have British racing back on our screens from Monday. Although international racing has filled a void during the long break there is no doubt the return of local racing will be a huge draw for our punters.

"We're expecting a busier than normal Monday with a mammoth card set to take place at Newcastle, while the biggest draw will come at the weekend as ITV Racing stages three fantastic days of top-class action."

Oisin Murphy: I'm like a fresh two-year-old just wanting to get going

FIRST PUBLISHED 2:45PM, MAY 31 2020
Newcastle should easily break the previous all weather matched volume record which was set at the inaugural AW Finals day