Racing's all-inclusive offer might not be what it seems 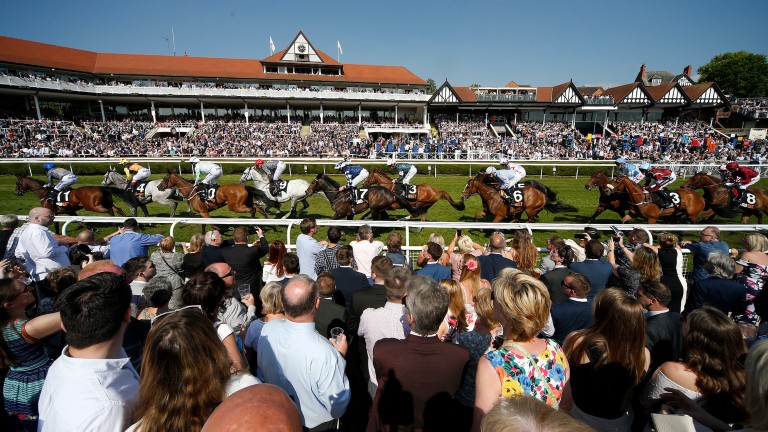 It's a fantastic time. Chester to York to Newbury to Goodwood to the Curragh and finally Epsom. And then it really gets going.

Not so good for Surf & Turf, though, if you want to be topical. Chester has gone and the Derby's too far off. It wouldn't be if there was a 'road to the Derby' site, like in the States. But Google that and all you get is Kentucky, bar one result about buses in Derby Road (departure updates are not available).

A few years ago Coral 'powered' a half-decent (okay, third-decent) one, but it seems that's stopped. Could it be that motivation to power such a site is slain by low, possibly negligible numbers of users wishing to bet through it?

Yes it could. That's the web. It's a hard place with rocks for furniture. Those hoping to make it pay can reflect on the words of George Harrison – the real genius in the Beatles – who asked, legend goes, when a planned website for him was demonstrated, "That's all well and good, but where do they put the money in?"

Show me the person who makes a living compiling a free internet resource with ample infotainment and interaction and I'll show you . . . er, I dunno, Jimmy Wales. Someone like that. But does he? Wikipedia's always asking for money, you know.

As for York, next groove on the scene, its website is as hep a cat as these phrases. Two years ago I described it as "comfortably dated, like Marks & Spencer before the last five revamps". York's had a revamp, but there remains something of the olde patchworkke quiltte.

York might look homely, but it provides plenty of information about everything from the Ebor to All Saints. It's keen to help, with a big slot for your queries and a wide-ranging guide for new customers, or "guests" – a misleading term that might suggest you won't have to put money in anywhere.

There's an interactive map that shows you where you can go, and where you can't, depending on how much money you put in and whether your shirt has a collar, and reassuringly pinpoints all the bars. There appear to be 23, so you won't run dry, as long as you're prepared to put in more money.

Anyway we all know what to expect. There's little point going on about it. More interesting last week was fallout.

Firstly, the Kentucky Derby. That was all about Thunder Snow, right? Maybe not, but the local Courier-Journal's online edition compiled a wacky news story about Godolphin's reluctant runner. I say news story. It's a good example of how journalism is doomed – or, depending on your outlook, of a bright future for news-gatherers. Or at least stuff-gatherers. I'd bet it didn't make the print edition.

After two paragraphs, which describe Thunder Snow as "an Irish colt" (technically correct but, you know), the story consists of a quote from the Washington Post, a tweeted video clip, one more sentence, a tweeted photograph, two more tweets, another tweet and a fourth tweet. Then the C-J snaps out of passivity with a direct quote from Saeed Bin Suroor. But that's yer lot, trad fans, as it ends on a quote from what can only be described as a tweet.

Each tweet a nail in a journalist's coffin, some argue. But we are the ones who climbed in.

More original fallout floated in from prolific US blog Pull The Pocket (@Pullthepocket). The post begins "Horseracing has always had a problem subsetting its customer base", but don't let that deter you. You'll see when you get to the bit about the friend who calls to say: "Hey, I'm at the Derby party at Woodbine."

"Cool, do you see anyone [horseplayers, regulars] we know?"

"No, everyone is dressed up here. It's really weird."

"Are you dressed up at all?"

"Jeans and a t-shirt. People are looking at me funny."

PTP's wider point is that racing strives to accommodate the day-outers while failing, sometimes, to service its regular customers. Inclusivity should be all-inclusive.

Fallout also radiated from our Q&A with the Racing Blogger, provoking more thought on the conditional nature of inclusivity. In British racing, this shares characteristics with the old notion of the deserving poor.

The Blogger, enthusiastic enough to say "the Sport of Kings welcomes all", found out that for some he was about as welcome as Steptoe and Son in the royal procession at Ascot.

It will be argued that, like Bananarama on their comeback, he is unduly benefiting from a surfeit of publicity. But he took an undue slagging here. Digs hit a nadir with the posting on Facebook "If Aids was a person" alongside a pic of the Blogger.

Okay, it's not Gamergate, but come on. Credit that he reposted this on Twitter with the message: "An absolute thunderbolt start to Monday! Being compared to Aids. Thanks Nathan, can't wait to have a pint with you."

It's often remarked that the Blogger is not a blogger but a vlogger. No worries, though – there are plenty of blogs for those who retain the ability to read beyond a headline or 140 characters.

Many are ineffectual gambols, but interesting ones exist. Try Keith Knight at Horse Racing Matters. Knight fuses dollops of history – and a respect for it that doesn't collapse into awe – with suggestions that don't all deserve to go unheeded and thoughtful, if frankly circuitous, observations on the state of the sport.

This he sees as endangered but not unrescuable and his latest post, on Nottingham, is a good place to start. Who knows what Knight will make of Poundland Hill.

Yes! To prove that Surf & Turf, like the Labour manifesto, is never knowingly unrevised, I'd best mention that all that old fallout has been eclipsed by the apocalyptic furore over Poundland Hill, and Twitter has lit up like an unlicensed fireworks party at a dissidents' gun club. And it's only Thursday.

FIRST PUBLISHED 6:00PM, MAY 13 2017
The Blogger found out that for some he was about as welcome as Steptoe and Son in the royal procession at Ascot