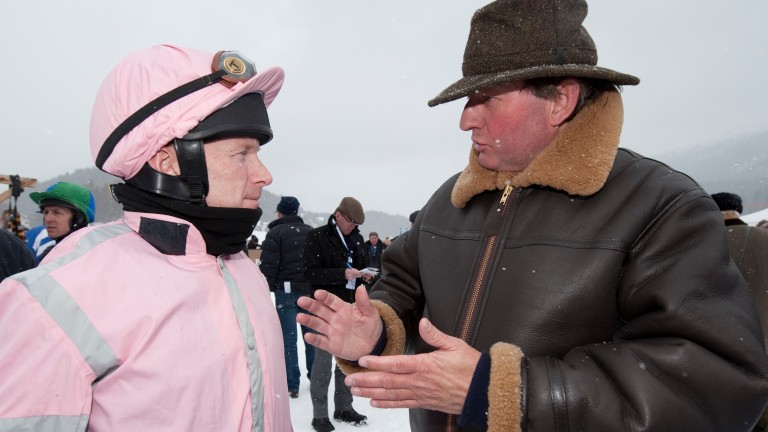 Joe Fanning and Mark Johnston: not a recipe for success when they go head to head
Edward Whitaker
1 of 1
By Peter Thomas UPDATED 3:42PM, NOV 22 2019

I've long believed that old wives are unfairly maligned by the English language. For these wordly wise women – possessing the experience of at least one husband, quite likely several resultant children and a concomitant number of in-laws – to have their tales reduced to the status of folklore and superstition is a sorry miscarriage of justice; to suggest that even the barmiest of them would come up with some of racing's longest-standing and most tenuous beliefs is ludicrously wide of the mark.

Wherever there is profit to be made from gambling, there are punters who are prepared to hurl themselves at what they optimistically describe as systems, when the rest of the world might be tempted to call them cisterns, designed expressly for the flushing away of perfectly good money.

In 45 years of betting, I've heard most of them, from greyhounds defecating on the way to the traps, thereby adjusting their power-to-weight ratio to its optimum; to the first horsebox encountered on the way to the races. They're usually appended with the words "you'd be surprised how often it works", although you really wouldn't.

These days, punters come armed with data rather than with wild supposition, thereby enjoying a warm, smug feeling of scientific certainty that unravels only when the tapes go up. Data is the new old wife, you might say, and must be treated with equal caution; yet it can be used responsibly, to debunk or validate seemingly random thought processes and assess their worth to the gambler.

Golden highway or path to penury? Here we take a database to some of the theories.

1 Back Stoute in May

Sir Michael Stoute would no doubt be mortified – or possibly disinterested – to learn there are punters who reduce his entire training season to a single month and assess his worth on that basis. Presumably the root of the system is that the great man is not especially quick out of the blocks – being a patient and considered kind of chap – but when he begins to unleash his better horses his form can be relied upon implicitly, at least for four weeks.

Remarkably, this is a system that works. Had you backed every Stoute runner in May for the last 19 seasons, you would have emerged with a level-stakes profit of £21.54, although it would have taken nerves of steel to endure the loss-making years between 2006 and 2014. Hopefully you would have saved some of your profit from the glory years, spanning 2000-2005, and then lumped on in 2017, by which time Stoute's rumoured inability to still train horses had been proved wide of the mark. 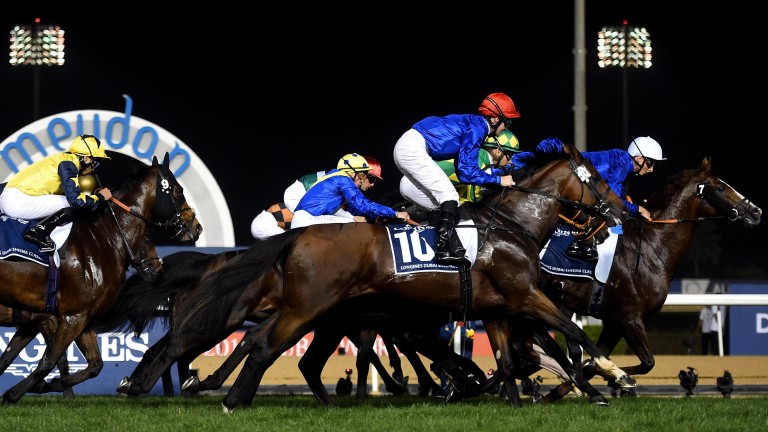 2 Back the Godolphin 'red cap' horses

Oh dear! Which one is the red cap? I know the blue one is the first string and the white one is the second, but is red the third or fourth? Or fifth? I'd feel uncomfortable with this train of thought unless I knew where the red stood in the pecking order and what possible difference this might make to the likelihood of success.

Is there an unwritten Godolphin law that the red cap (I think it's the third string) signifies a raised level of expectation? Does an edict come down from on high that the team have had their conkers on and the wearer of the magic cap would do well to pull out all the stops.

All things considered, this seems unlikely, so presumably we are dealing with a belief that the market over-reacts to cap colour in this instance – given Godolphin have so many runners trained by multiple trainers, that it may be hard to separate them in terms of ability and cap allocation beyond first and second string could well be entirely random – and the red is too often under-bet as a consequence.

That would make a degree of sense, and yet only one year in the last 19 has it yielded a profit. No fewer than 197 losers and an overall loss of £79 suggest it's nonsense.

3 Back the outsider of three

Now you're talking! A proper, old-fashioned system founded on deep-seated understanding and infallible racing instinct. This nugget was first imparted to me while I was a suckling babe and I have had no reason to doubt it since, despite financial evidence to the contrary.

I have always imagined the kernel is this: in a three-runner race, the first two in the market will be concentrating so hard on each other they will forget all about the poor, unconsidered makeweight, who will thus be able to potter around in his own time, waiting for the others to goad each other into jumping errors and an injudiciously fast pace that will eventually end in fatigue and mayhem. The third horse then saunters through to pick up the pieces of the race and reward its many shrewd backers.

It's a theory that may well give you a run for your money – with seven years of profit in 19 – until your money runs out. A loss of £145 suggests this will be sooner rather than later.

4 Back Richard Johnson when he rides against Philip Hobbs

This pair are widely touted as the closest thing in racing to a happily married couple, so long and so unshakeable has their union been. They are regarded as a formidable alliance when joining forces, and you might think such loyalty would preclude dog-eat-dog rivalry when they oppose each other, but you'd be wrong.

When Johnson is jocked off by Hobbs – who has other jockeys to keep happy, of course – or decides he would be better off siding with another trainer, the rider's hackles seem to rise, he redoubles his efforts and has rewarded his backers with a 19-year profit of more than £96. Crucially, you don't have to wait long between drinks, either – 13 of those years have seen your account in the black thanks to this curious piece of human chemistry. 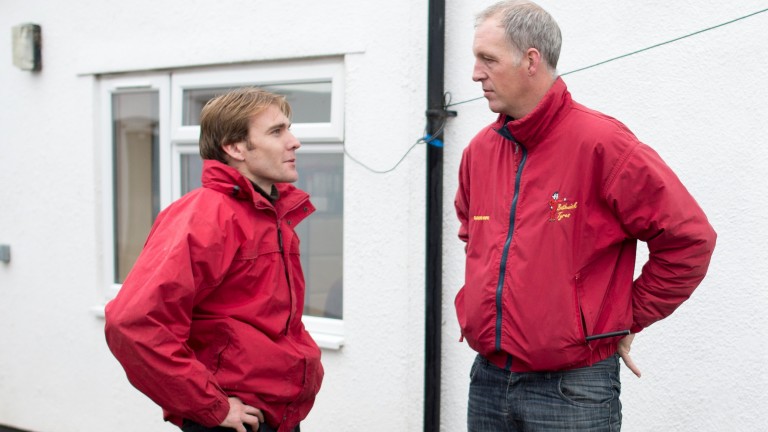 5 Back Tom Scudamore when he rides against David Pipe

It seems the relationship between Scudamore and Pipe is rather less volatile than Hobbs and Johnson's. When their partnership is rent asunder and they face each other in the arena, the jockey does not fare well and neither do his backers, to the tune of -£69, although intriguingly three of the last four years have ended in balance-redressing profit – following eight straight losses. What this says about the state of their union is anybody's guess, but could it be a system that is about to catch fire?

6 Back Joe Fanning when he opposes Johnston

Few people who oppose Mark Johnston emerge from the experience unscathed and many live to regret it. It's unlikely Joe Fanning chooses to be separated from Johnston's horses and he has ridden 1,205 winners for 'Braveheart' in his time, from 7446 rides – albeit at a level-stakes loss of £1304.20 – so he appreciates the merits of the Middleham maestro. When facing him head on, however, he has proved an unreliable ally for the punter, with seven losing years and a loss of £48.86 in the last 11.

The advice is: don't argue with Mark Johnston. Ever. You'll lose.

Most jockeys struggle with their weight to a degree. They'll have what we may call a 'struggle weight' – the weight at which they have boiled themselves down to the bare bones yet still ended up putting up overweight. You might think that making the effort to get to, or below, this weight would signify an indisputable confidence the effort will be rewarded; that they would only spend that many hours in the sauna, gnawing on a lettuce leaf, if their trainer had advised them it would be well worth their while.

You might think that, but you'd be wrong. Jockeys, as a group, riding so light as to be practically transparent, will not reward their backers with proportionally higher rates of return. Their suffering is no guarantee of our gain. In fact, when they sweat down to below their minimum weight, they seem to perform without distinction, losing us our money every year without fail, to the alarming extent of more than £4,560 in 19 seasons.

I'd be happier if they had a good stew and a couple of pints and consigned this dangerous myth to the dustbin of history.

FIRST PUBLISHED 6:00PM, FEB 21 2019
These strategies are usually appended with the words 'you'd be surprised how often it works', although you really wouldn't

Brilliant Baaeed strolls to fourth victory to leave Haggas aiming at the top Forgive the gushing enthusiasm but I feel like I have seen something special Rooster Booster: a moment of glory wanted by all but expected by none 'I've seen tougher Stewards' Cups' - trainer thoughts on the day's big handicap One trainer, one jockey, one horse and one race to watch on Saturday Which of the Mark Johnston-trained five will flourish in opening contest?