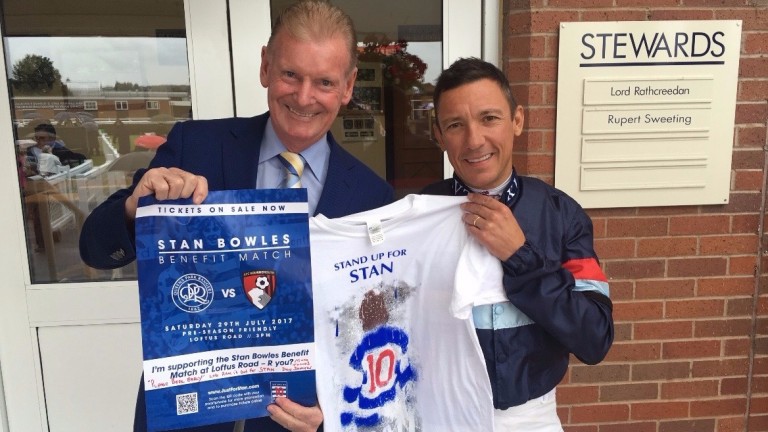 Members of the racing community are rallying round to support Stan Bowles, the former QPR and England footballer who is suffering from Alzheimer’s disease.

QPR, for whom Bowles, 68, made over 300 appearances in the 1970s, are staging a pre-season benefit match against Premier League opponents Bournemouth on Saturday, with all funds raised going towards the club legend’s care.

More than 7,000 tickets have already been sold for the match, but people unable to get to Loftus Road can purchase a virtual ticket for £12 via justforstan.com.

“I’ve known him throughout his football and racing days and he’s a nice human being – a real character. He’s not very well, and it’s horrible to see.

“Stan loves his racing. He has many friends in the sport and we’re all supporting him.”

Don Shanks, another long-time friend and former teammate of Bowles, added: “Stan has been diagnosed with the condition for the last four years.

“Sadly, it gets progressively worse with each year. There is no reversal. He can walk but there is no conversation; no sentences.

“He's living with his daughter Andria in Manchester at the moment, but will need to go into full-time care at some stage soon.

“We’re hoping to raise enough money to find him a comfortable place in Manchester for the final leg of his journey.

“Stan always loved his racing – especially when he had a few quid on! – and used to go regularly with Peter Shilton and Mick Channon.

“I’d like to thank Frankie Dettori, Ryan Moore and Silvestre de Sousa for their support in highlighting the benefit match ‘Stand Up For Stan’ T shirts at Newbury last weekend.”

Bowles will be at the match on Saturday and Shanks is hoping he is greeted by a bumper crowd.

“It’s going to be emotional,” he said. “Stan deserves a big crowd, and I’m sure people will turn up and support him.”