Racing Post's guide to betting on the action 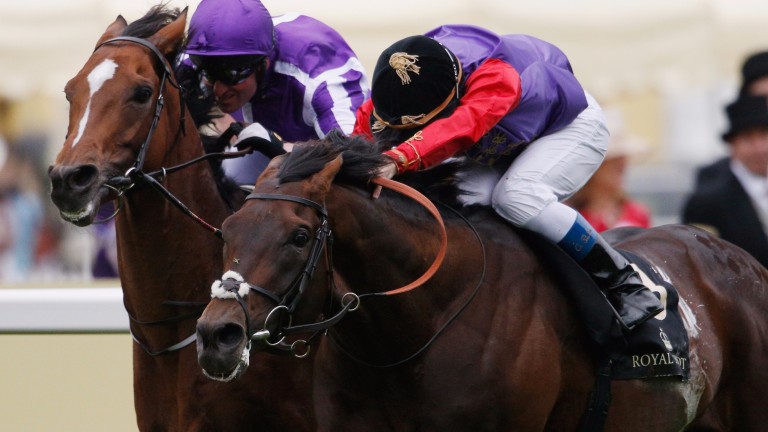 Dartmouth (red sleeves) and Highland Reel could both be bound for Hong Kong
Alan Crowhurst
1 of 1
By Stuart Riley 5:01PM, NOV 16 2016

From Wednesday, British punters will be able to bet into the huge Hong Kong pools after a deal between local authorities and Betfred, Ladbrokes and Coral.

The Hong Kong pools are famously vast – betting turnover averaged £134,944,842 per meeting last season – and free access to that kind of liquidity, in a restrictionless PMU environment, is sure to tempt many.

The racing taking place on Wednesdays and Sundays at Sha Tin and Happy Valley. While Sha Tin races during the afternoon (5am-10am UK time), spectacular Happy Valley in the heart of the skyscrapper-strewn territory typically races on Wednesday evenings (11.15am-3pm UK time).

To help you find the winners the Racing Post will carry all cards complete with expert advice, but to get started here's some must-know information about this ultra-competitive racing jursidiction.

2.042 million - the number of racegoers who attended last season

2 - the number of racecourses in Hong Kong

Situated amid a forest of skyscrapers in the heart of Hong Kong, Happy Valley is one of the world's most remarkable racecourses. It largely races on Wednesday evenings and will host 42 fixtures this season. A tight track with sharp turns and a short home straight (slightly more than a furlong and a half), which places an emphasis on early tactical speed from the starting gates to obtain a prominent position of the rail. Being trapped wide is as detrimental as trying to come from off the pace.

The larger of the two tracks with a capacity of 85,000, with racing taking place in the afternoon. It has a tighter all-weather track inside a more galloping turf course. All Group 1s are held at Sha Tin as it is generally perceived as a fairer track. It has a longer home straight at just over two furlongs and over 5f in a Class 2 its par time is over a second quicker than Happy Valley's.

While Moreira bases himself in Hong Kong the likes of Christophe Soumillon, Hugh Bowman, Vincent Cheminaud, Gerald Mosse and Chad Schofield visit for varying amounts of time. British jockeys too make regular visits to the land where Neil Callan is based, with Ryan Moore and Silvestre de Sousa riding 16 winners each there last season and Oisin Murphy joining them this winter.

Last season Australian trainer John Size claimed an eighth Hong Kong trainers title since 2001. Size saddled 68 winners, but if the championship was decided on prize-money as it is here his total of HK$97,917,838 (£10,177,151.20) would have been bested by another Australian, John Moore.

The Longines-backed Hong Kong International Races takes place on December 11 this year and features the four most prestigious Group 1s in the Hong Kong calendar.

1 Play the pace at Happy Valley. Look for horses that can grab a prominent position on the rail.

2 Look to the top jockeys. Joao Moreira rode 168 winners last season while only 19 others rode more than six. The top riders get their pick far more so than in other juristictions, but can be consequently overbet.

3 Do your homework. The HKJC make everything from vetinary to trackwork updates available and extensive free race replays are available for form analysis.

4 The clock is a much bigger factor. With races run on largely consistent ground, and at just two venues, far more faith can be put in the clues the stopwatch provides.

5 Read the Racing Post Spotlight verdicts. Our international experts will crunch all the form for you and provide you with an easy guide to each race.