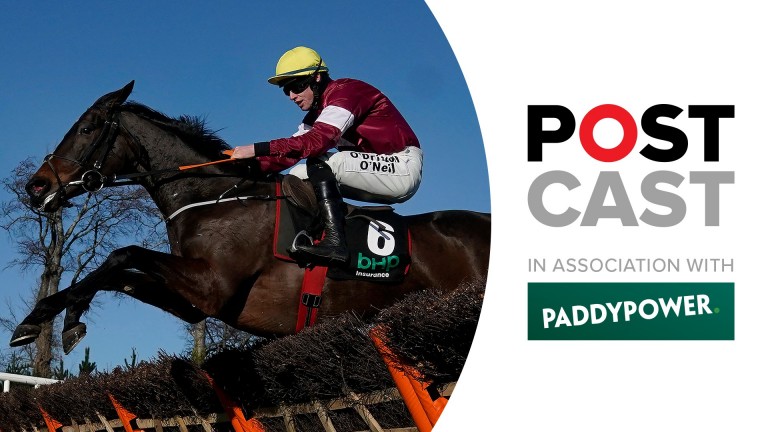 1 of 1
By RPTV UPDATED 5:03PM, FEB 4 2019
Racing Postcast: Apple's Jade - Champion Hurdle | Dublin Racing Festival Review | Midweek Tipping
Maddy Playle, Dave Orton, Robbie Wilders and Paddy Power's Sam Harley review an informative weekend of action including Apple's Jade demolition of her rivals at Leopardstown in the Irish Champion Hurdle and all the action at Sandown, plus they give their best bets from midweek racing.
On the show
The team review the weekend's racing including two races that have blown the Champion Hurdle market wide open, with Apple's Jade winning by 16 lengths in the Irish Champion Hurdle at Leopardstown and Buveur D'Air kicking on late to take all in the Contenders Hurdle at Sandown for the third year running. Who do our team think impressed the most?
The Dublin Racing Festival at Leopardstown saw some big names go head to head with the likes of Min, Envoi Allen, Le Richebourg, Belshill, Sir Eric and La Bague Au Roi to name a few taking all in their races respectively. The team break down the best!
The cracking level of racing continues this weekend at Newbury with the Denman Chase and the Betfair Hurdle, alongside the Kingmaker Novices’ Chase at Warwick. The team asses who could run and who they could see taking all.
Plus, we pick through the best of the action from the midweek racing at the likes of Wolverhampton, Huntingdon, Ludlow and more. Can our team pick out a few winners for you?
All prices can be found here
FIRST PUBLISHED 3:40PM, FEB 4 2019
Bookmaker
Price
E.W. Terms
bet365
Open Account
Ladbrokes
Open Account
William Hill
Open Account
Coral
Open Account
Paddy Power
Open Account
Betfair
Open Account
Sky Bet
Open Account
Sporting
BetVictor
Boylesport
888sport