RP Sunday TEN THINGS YOU MIGHT NOT KNOW ABOUT...

Racing around the world through the decades with royal connections 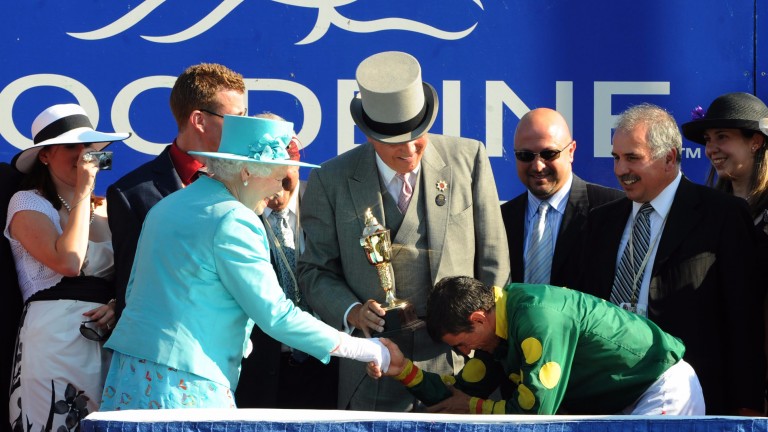 1 In 1939 George VI became the first reigning monarch to attend the King’s Plate – now Queen's Plate – at Woodbine racecourse in Toronto, along with the late Queen Mother, the first of her six visits to the "Gallop for the Guineas". The Queen has presented the current gold trophy on four occasions, most recently after the victory of Big Red Mike in 2010, an occasion when protocol took a back seat as owner Dom Romeo placed a friendly hand on the monarch, while jockey Eurico Rosa Da Silva’s exaggerated bow and handshake also made newspaper front pages.

2 Her Majesty’s Plate has been through numerous alterations in the 267 years since George II gave a £100 prize for a race at the current Down Royal site near Lisburn in Northern Ireland’s County Down. Its most recent incarnation only dates from 1996 and currently sits in a prime spot during the course’s popular evening fixture in late July. Set to be run this year for the second time at Listed level, the Plate was won in 2015 by subsequent Gold Cup hero Order Of St George.

3 Keeneland authorities took the unusual step of staging a mock bloodstock sale for the Queen’s visit to Bluegrass country in 1984. The inaugural Queen Elizabeth II Challenge Cup was run on dirt and won by Sintra, before moving the following year to the brand new turf layout, and had accelerated from its initial Listed status through the ranks to Grade 1 by 1991. European success came in 1997 with the John Gosden-trained Ryafan and again in 2010 when Aidan O’Brien and Colm O’Donoghue teamed up with Together. 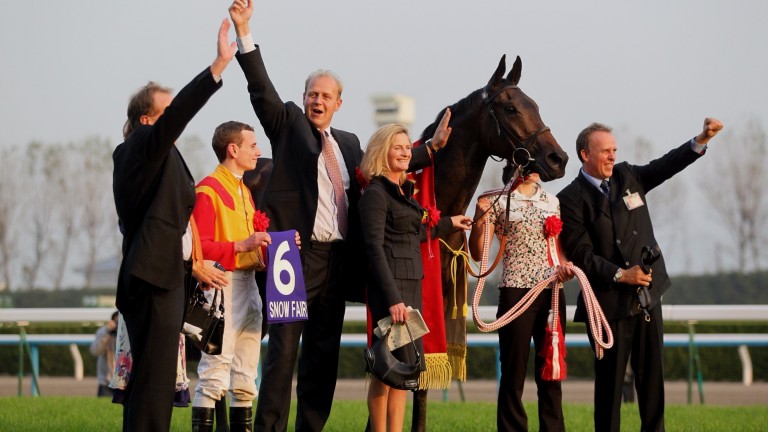 4 Established in 1976, the year after the Queen’s only official visit to Japan, the Queen Elizabeth II Commemorative Cup was first opened to overseas-trained runners in 1999. Its international reputation was sealed by Ed Dunlop, whose own turf queen, Snow Fairy, became the first successful foreign raider under Ryan Moore in 2010. Snow Fairy and Moore returned 12 months later off the back of placed efforts in the Arc and the Champion Stakes to defend her crown, defeating Aventura by a neck.

5 One of Cape Town’s social highlights and founded in 1861, just a year after its Canadian cousin, the Queen’s Plate at Kenilworth was also granted royal approval by Queen Victoria.  As a weight-for-age contest, the Plate has witnessed numerous repeat winners down the years, with 2017 hero Legal Eagle the tenth horse to claim a second victory since 1948. Yet none can match the achievements of Pocket Power, who won four consecutive renewals from 2006 for trainer Mike Bass and jockey Bernard Fayd’Herbe.

6 The West India Turf Club gained the Royal prefix from George V in 1935 and on February 21 1961 the Queen and the Duke of Edinburgh visited Mahalaxmi racecourse in what was then known as Bombay, presenting the prizes after a race named in honour of the occasion as well as the Indian St Leger.

7 The first of two visits made by the Queen to Hong Kong in May 1975 was commemorated by the inaugural running of the QE2 Cup, over just short of a mile on sand at Happy Valley. By the time the Queen and the Duke of Edinburgh returned in 1986, the Sino-British agreement to hand power over to China had been signed, while the race had been transferred to the then Royal Hong Kong Jockey Club’s new track at Sha Tin. The Queen presented the trophy to connections of the 20-1 outsider Forever Gold, trained by 1966 Derby-winning handler Gordon Smyth.

8 Sydney’s Queen Elizabeth Stakes was already 103 years old and had gone through numerous changes of identity before the current title was used for the first time to mark the visit of the new Queen on February 6, 1954. Randwick has long been associated with the Royal moniker in an unofficial capacity but the course’s name received the sovereign’s official blessing on a visit to open the Paddock Grandstand in 1992. Since 2014 the Queen Elizabeth Stakes has gained even greater prominence as the highlight of the Championships, with victory going to the mighty Winx in 2017.

9 On a visit to Chantilly in 1974 the Queen was hosted by Marcel Boussac for lunch, before the royal party was driven up the racecourse straight in an open-top limousine. The Queen then watched Joe Mercer steer her own Highclere to a length and a half victory over Comtesse Du Loir in the Prix de Diane. The Queen had visited Longchamp two years earlier where La Coupe de Sa Majeste la Reine Elizabeth was run in her name, before becoming the Prix de Sandringham and eventually transferring permanently to Chantilly in honour of Highclere’s victory in 1979.

10 Lord Huntingdon was an enthusiastic international campaigner of the Queen's homebred Enharmonic in the early 1990s, collecting Group 3 wins in Cologne, Baden-Baden and San Sebastian, as well as landing the Arlington Handicap with Unknown Quantity under Jorge Velasquez. More recently Sir Michael Stoute sent Interlude on a successful raid to Deauville to score in the 2000 edition of the Group 2 Prix de Pomone.

'There is no denying the phenomenal training that has gone into Rohaan' Ascot due a fitting finale with racing's greatest fan set to star on day five Duchess of Cornwall's prominence could offer clues to the future of royal racing Royal approval: King's Lynn and Oisin Murphy going all out for Ascot Group 1 Confirmed runners and riders for the King's Stand at Royal Ascot on Tuesday 'Any criticism is unfounded' - Down Royal boss defends Covid-19 protocols