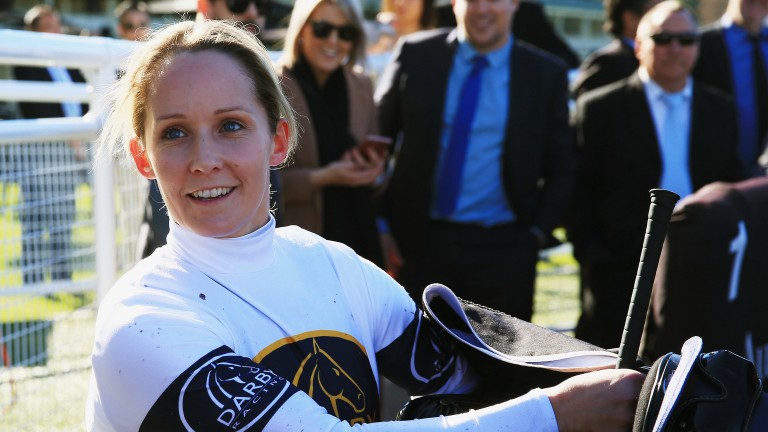 Five years ago Rachel King took a gamble – and it has paid off big time. At 23 she left Britain for Australia, leaving behind her entire world for the opportunity to ride as an apprentice for the doyen that is Bart Cummings.

After a two-month stint and brief trip home she came back to work for another legend of the Australian turf, Gai Waterhouse, and she has been here ever since.

King has thrived in a system built to give young riders opportunities and three apprentice titles later – one in the country, one provincial and last year's Sydney Metropolitan Apprentice Premiership – she is now a Group 1-winning jockey courtesy of Maid Of Heaven's head success in the Moet & Chandon Spring Champion Stakes at Randwick on October 6.

She still regularly rides for mentor Waterhouse, but due to the set-up in Australia is not connected to one yard and is regularly seen riding in Stakes races adorned in Godolphin blue for Bart's grandson James Cummings.

"I'm riding a lot for Godolphin and that's incredible," she says. "I've had a lot of success for them in the last year and, especially being English, riding for them is just such a privilege. Every time I put the royal blue on I feel proud. I grew up admiring them and thinking I'd love to ride for them, so to be on them consistently – especially in Stakes races – is a dream come true."

King's success means she is now flown from Sydney to Melbourne for the biggest days and she will have just her second ride at Flemington on Derby day.

She partners Lanciato for Mark Newnham in the Group 2 The TAB Stakes over six furlongs and says: "I've ridden the horse quite a bit. I actually had my first Group winner on him and I think he's definitely a place chance. He's been more effective over seven furlongs but this is the next best option and I expect him to handle the straight track. He's had a good freshen up and trialled really well the other day so he's ready to go."

He would struggle to be as ready to go as King, who finished her apprenticeship on July 31 and, rather than struggle the way most do when losing their claim, has really kicked on, riding her first Group 1 winner, followed up with a treble at Randwick on October 20.

"Winning the Metro title was my main aim for last season so it was good to finish by winning it as it shows trainers what you can do and gives you a kick along into the senior ranks," she says.

"I do have to keep pinching myself that it's actually happening. I couldn't have wished for it to happen any better. The Group 1 was fantastic because if you get on one of those horses you can get taken off when they go for the big races as they say 'we're going to put a Group 1 jockey on'. Well now I can say 'I am a Group 1 jockey'."

King's confidence levels are sky-high and she is settled in Sydney. She misses her family dearly but could not bring herself to give up the lifestyle, her boyfriend – fellow jockey Blake Spriggs – and a couple of dogs to return home. But she would love nothing more than to make a working visit however.

"I'd really love to come back and ride in the Shergar Cup if I can get an invite, but at the moment I've got a pretty good life here. I live on the beach, ride out six mornings a week and race-ride four afternoons as we don't have to go to a lot of the lesser meetings so it's pretty good. If I could move my family down here it'd be perfect."

Is Australia the best place in the world for female riders?

Nowhere in the world do female jockeys consistently have as much success as in Australia. The Thoroughbred Racing Commentary's global jockey rankings has just 10 women ranked in the world's top 400 – and seven of them are based in Australia.

Opportunities in Australia, while still not even, are better than anywhere else and Rachel King puts that down to three things: a system designed to provide opportunities, the lower weight scale in the biggest races and the more tactical nature of racing in Australia.

"At the start we're given more opportunities and can make the most of them because the weights are a big thing, a lot of the girls can consistently ride at light weights having eaten and hydrated, while the boys are wasting and sweating," she says.

"It's also more tactical and we race a lot tighter, so rather than throwing the kitchen sink at a horse it's a lot neater and about keeping them balanced, which suits me as I'm not a big strong person but I can keep their momentum up and by reading a race you've got more in the finish."

Given a lot of Australia's biggest Group 1s are handicaps – the minimum weight in the Melbourne Cup is 49kg (7st 10lb) while a three-year-old filly in the weight-for-age Cox Plate would carry 47.5kg (7st 7lb) – female riders regularly get opportunities in the biggest contests and Michelle Payne won the race that stops a nation in 2015.

The final factor is a system designed to spread around chances. Australia's a big place and the likes of Kerrin McEvoy and Hugh Bowman, who King says have been helpful to her development, cannot be everywhere.

"There's not those big associations where certain jockeys ride for certain stables," she adds. "It's a little more spread out which is quite good as everyone gets an opportunity and it's up to you to make the most of those opportunities.

"Having had a bit of experience back home and being a bit older [when she arrived] I think I was prepared to work a bit harder than others. People know if you work for Gai [Waterhouse] you can ride, so I was able to start off in a country with a bit less competition where trainers had the confidence to use me and it's just grown from there."

Duretto ruled out of Melbourne Cup

FIRST PUBLISHED 2:18PM, OCT 31 2018
He's had a good freshen up and trialled really well the other day so he's ready to go