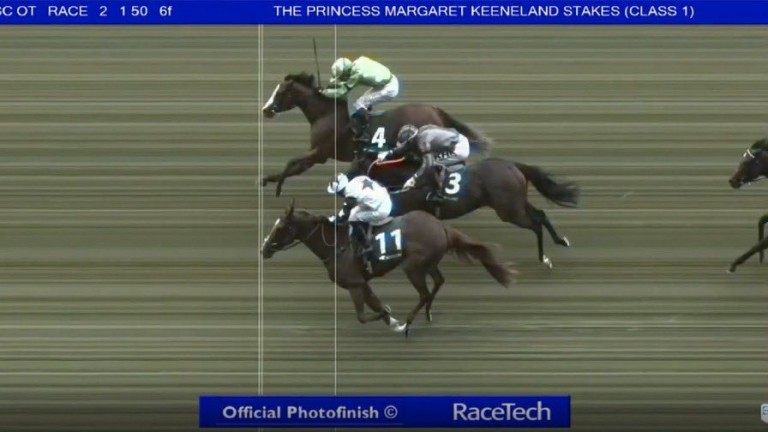 Zain Claudette: won by the narrowest of margins at Ascot
RaceTech
1 of 1
By Jonathan Harding and Lee Mottershead UPDATED 9:21PM, JUL 25 2021

It was a poignant first Group victory for the jockey, who last year spoke candidly about his battles with addiction, but he faced an anxious wait following a photo-finish with Desert Dreamer.

Trained by Ismail Mohammed, Zain Claudette stayed on powerfully in the closing stages to just win by a nose from the 9-4 favourite.

"It doesn't just mean a lot to me, it means so much to my family and everyone who helped me get through the rough patches in my life," said Dawson. "This is massive and I'm a lucky young man."

Zain Claudette is likely to be stepped up in class next time and her trainer said: "She's a lovely filly and is doing very well. She keeps improving with every run and has been consistent this year. She's a Group 3 winner so we're planning for some big races with her now."

Science for the Solario

New Science is likely to follow the Masar route and head to Sandown's Solario Stakes after leaving behind his Royal Ascot defeat with a ready success in the Listed Pat Eddery Stakes. 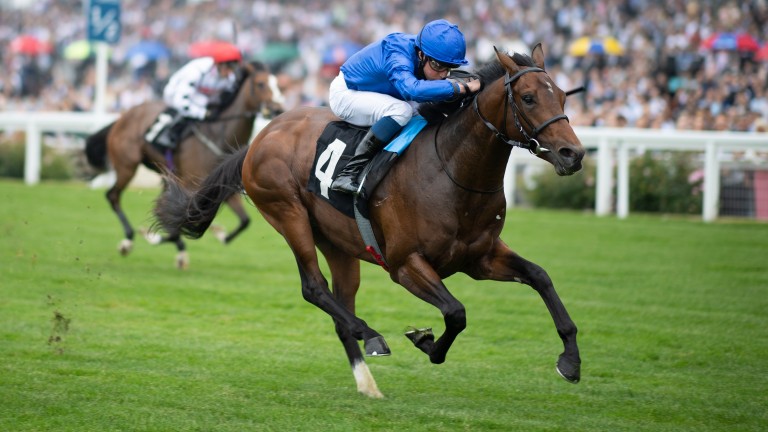 William Buick knew the Chesham Stakes was lost when Godolphin's Yarmouth maiden winner proved uneasy on the soft ground heading to post. On a much quicker surface he was a different animal, and stormed up the hill to confirm himself a smart colt.

Trainer Charlie Appleby, who watched from home having been 'pinged' midweek, said: "He was the class horse in the field and I hope he'll get some confidence from that. We'll stay away from soft ground now and the Solario could be the way forward for him."

Danyah played the bridesmaid in two big handicaps this season but made no mistake this time when winning the Moet & Chandon International Stakes.

The four-year-old justified 9-4 favouritism under William Buick, who charted a course down the middle of the track and rode him out to win by a short head from Star Of Orion, with Dance Fever in third.

Danyah finished second in the Spring Cup at Newbury before chasing Highfield Princess home in the Buckingham Palace Stakes in June.

"I'd have been gutted if he was chinned again and I thought he had been," said trainer Owen Burrows. "It was not the plan for William to make most of the running but we were a bit concerned there wasn't that much pace around him and he toughed it out well in the end."

On future targets, Burrows added: "He's won off a mark of 106 so he'll likely be raised to around 110, but Listed and Group races aren't really likely to be run to suit, so we'll have to wait and see."

Rosie Margarson was already a winner having successfully got the all clear to return after suffering a broken ankle in May, but more success was to come when she won the 7f handicap for female amateur jockeys on her dad George’s Spirited Guest.

Rosie Margarson said: "It's ten weeks since I hit the deck and broke my ankle. All the pain and the physio was worth it. I would break my ankle again if I could do this again.

"Jeez, I can't measure how much of a buzz that gave me. The horse did it all. I was just a passenger. I now have a 100 per cent strike-rate at Ascot as I won a charity race on Bean [Caribbean Spring] as well. I'll keep shouting about that!"

FIRST PUBLISHED 3:07PM, JUL 24 2021
It doesn't just mean a lot to me, it means so much to my family and everyone who helped me get through the rough patches in my life