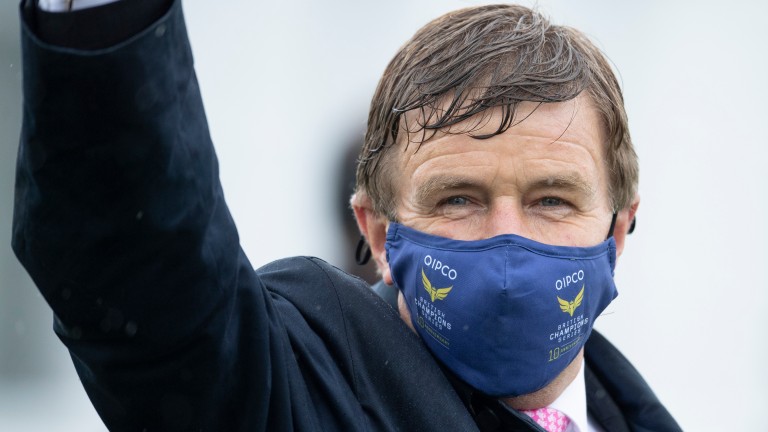 William Muir: has high hopes for Salisbury scorer Like A Lion
Edward Whitaker
1 of 1
By Lewis Porteous UPDATED 7:56PM, JUL 11 2021

William Muir is eyeing a tilt at the Group 3 Somerville Tattersall Stakes at Newmarket in September after Like A Lion scored an impressive success on his second start in division two of the 7f novice stakes.

Things hadn't gone to plan for the son of Kodiac on his debut at the same track in April but his 10-1 success did not come as too much of a surprise to Muir, who trains Like A Lion in partnership with Chris Grassick for owners Carmel Stud.

"We went there thinking he'd have to go very close on debut but he got knocked sideways early on and when he came home that night he was lame behind but it was only muscular," said Muir.

"I've just let him come to himself since then and we've always thought this was a really nice horse. We left the yard this morning saying this will be the first lion to win today, then the boys can follow on at Wembley!"

Asked if he might be tempted to pitch the three-length winner into Group company, Muir added: "I really love the Group 3 Somerville Tattersall Stakes. I've had a few horses run well in it but haven't had one good enough to win it and that could be the type of race for him.

"He's named in remembrance of a great owner and friend of mine, Kevin Mercer. You could have a night out and Kevin would be wandering a little bit in the evening. He'd get up to play golf at 7am the next morning and you'd ask, 'How are you Kev?' And he'd say, 'Like a lion Will, like a lion!' This one's for Kevin."

FIRST PUBLISHED 6:20PM, JUL 11 2021
We left the yard this morning saying this will be the first lion to win today then the boys can follow on at Wembley!