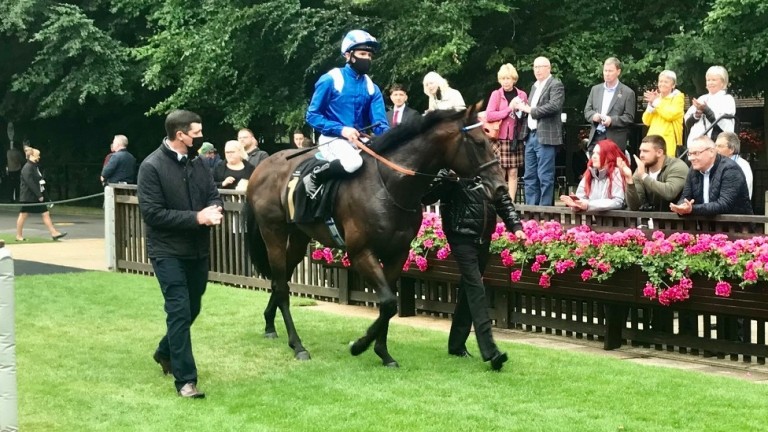 Day two of the first meeting at the July course with a crowd since 2019 was lit up by the impressive Baaeed, who looked another colt with Group potential for Shadwell Estates when defying a penalty in the mile novice.

Just three days after his stablemate Mohaafeth had carried the same colours to glory in the Hampton Court Stakes at Royal Ascot, William Haggas's colt blazed out of the Dip to maintain his unbeaten record with a seven-and-a-half-length romp.

Dane O'Neill has struck up a good relationship with the son of Sea The Stars and was impressed. He said of the 4-6 favourite: "He's a decent colt and that was a good performance considering he wasn't in love with the ground. "

Angus Gold, racing manager to the winning owners, added: "It's only 12 days since he won on his debut at Leicester, so we may give him some time after that, but that was impressive. We hope he can progress this year, but he's very much a next-year horse."

Robert Cowell saddled the first three home in the feature 5f handicap three weeks after filling the first four places in a similar race on the Rowley Mile.

The trio were headed by the Cieren Fallon-ridden Isle Of Lismore, who was followed home by stablemates Razor Glass and Faustus.

Winning owner Paul Ryan said: "He's named after my favourite island in the Western Highlands and seems to be improving with his racing. He did that well considering he was up 10lb."

Lordship Stud lies only a couple of furlongs from the July course and Trevor Harris's breeding operation celebrated a productive two days when Spanish Kiss won the 1m6f handicap.

The son of Lope De Vega, who is owned by Kennet Valley Thoroughbreds, is a half-brother to Loving Dream, who carried the Lordship colours to glory in the Group 2 Ribblesdale Stakes at Royal Ascot on Thursday.

Callum Shepherd will not ride an easier winner all year than the 5-6 favourite, who was adding to his previous win at York.

Winning trainer William Knight said: "The fact that Spanish Kiss has now won at this trip opens other doors and maybe one day he could be an Ebor horse." 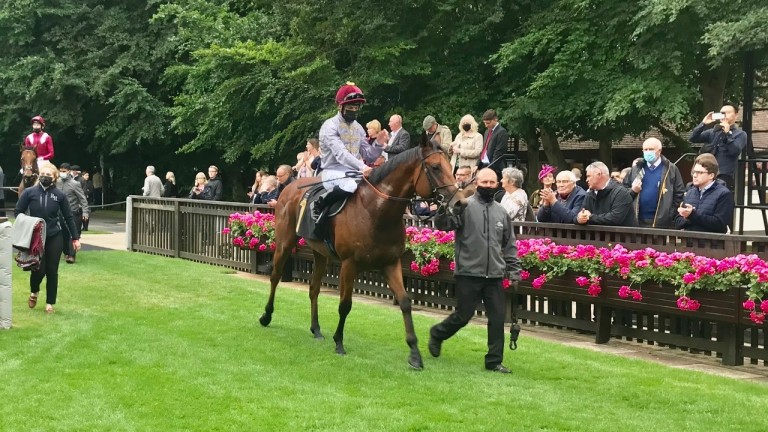 Lusail and Pat Dobbs after winning the opener

Richard Hannon is often in the mix for leading trainer honours at the summer venue and got on the board early with a double, kicked off when Lusail defied a penalty in the 7f novice.

The 7-2 chance found the drying ground to his liking to hold the late surge of 7-4 favourite Find.

Hannon won the race in 2018 with Neverland Rock, who went on to finish third in the Group 2 Superlative Stakes at the July meeting, and the son of Mehmas may head there.

Alison Begley, representing owners Al Shaqab, said: "That was a good performance under a 6lb penalty and Pat [Dobbs, jockey] said Lusail would have gone again if the second had come to him."

Hannon and Dobbs doubled up when Mummy Bear landed the 6f fillies' handicap at 16-1.

'Our most exciting horse in a long time' - plans set out for electrifying Baaeed The Goodwood races that gladdened the heart and quickened the pulse A true icon is a rare beast indeed - but brilliant Battaash is more than worthy Brilliant Baaeed strolls to fourth victory to leave Haggas aiming at the top Will Baaeed end the year as the best miler in Europe? Our experts have their say Jim Crowley praises 'proper horse' Baaeed with unbeaten star now 5-2 for QEII