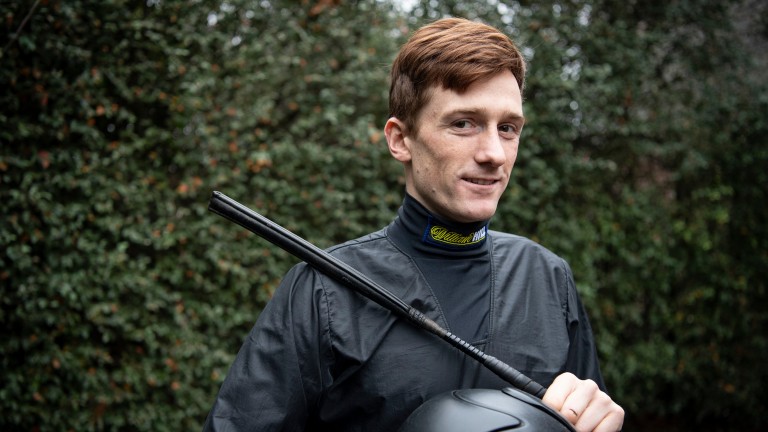 Sam Twiston-Davies: rode his 60th winner of the season at Hereford on Wednesday
Edward Whitaker (racingpost.com/photos)
1 of 1
By James Stevens 6:00PM, NOV 24 2021

Sam Twiston-Davies reached 60 winners for the season on a day he endured the highs and lows of odds-on upsets in small fields.

The jockey was gifted victory in the 3m1½f novice hurdle aboard Ballintubber Boy after the departure of the 30-100 favourite Grace A Vous Enki when leading three out.

Twiston-Davies needed only to steer the recent Stratford winner away from trouble to strike by 24 lengths from his two lesser fancied rivals.

Things were not so straightforward for 4-6 shot Champagne Noir later on the card. The favourite appeared to struggling from a long way out, yet stayed on under pressure to get level with leader Wick Green in the straight. Nevertheless, it was the 12-1 outsider who found more in the closing stages to stay on best under Peter Mason and land the 3m1f handicap chase by a length and a quarter.

Ballintubber Boy's victory was one to savour for the Twiston-Davies family, with Sam's brother Willy having bought the son of Robin Des Champs and father Nigel in charge of the training.

Nigel Twiston-Davies said: "I don't think it took much winning but never mind, we won and that's what's racing's all about. I don't think he did [have the winner covered], but he was doing the best he could and that's all you can do.

"He's a chaser in the making, without a doubt, he probably won't be the best in the world but he's a very nice horse."

Harry Cobden and Paul Nicholls bookended the card with odds-on winners, with Le Chiffre D'Or taking the 2m3½f novice hurdle before Lallygag – a brother to the classy Lalor – stretched clear to win the bumper by five lengths.

FIRST PUBLISHED 6:00PM, NOV 24 2021
I don't think it took much winning but never mind, we won and that's what's racing's all about