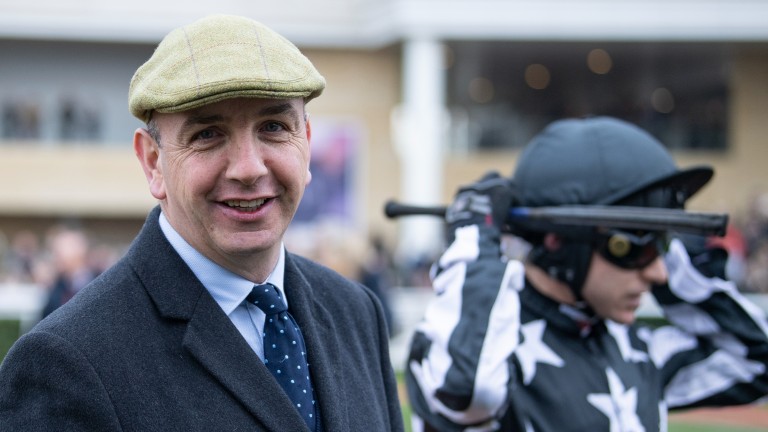 Fergal O'Brien with a task on his hands to deliver with the unpredictable Billy The Squid
Edward Whitaker
1 of 1
By Catherine Macrae 6:00PM, JUN 19 2021

Fergal O’Brien remains on the quest to pick up an elusive first win for Billy The Squid after the gelding refused to go out on another circuit when sent off favourite.

Travelling in the middle of the field at the halfway point, the four-year-old suddenly pulled to the left to leave the pack when they set off back around the course.

The refusal to race almost unseated Paddy Brennan, who was able to stay on him but was unable to keep Billy The Squid with the field.

O’Brien said: "If anyone needs an advert for the fact that horses don’t go racing if they don’t want to, then Billy The Squid is your man.

"Today is the first time he's actually stopped on the track with us; he’s been tricky before once but he didn’t quite stop, he went from first to last. We thought today with blinkers on that he might be okay.

"He didn’t fancy going back out on another circuit, so he didn’t, and he’s happy with himself afterward. He’s still having a little chuckle to himself as we speak."

The race was Billy The Squid’s 11th start for O’Brien, and he has been placed in all three of his races this season before Saturday’s antics.

Success in the 2m4f handicap hurdle completed a double for Fox, who won the previous race with a gutsy late run from Vino’s Choice for Lucinda Russell, whose yard is only 21 miles south of the course.

FIRST PUBLISHED 6:00PM, JUN 19 2021
If anyone needs an advert for the fact that horses don’t go racing if they don’t want to, then Billy The Squid is your man