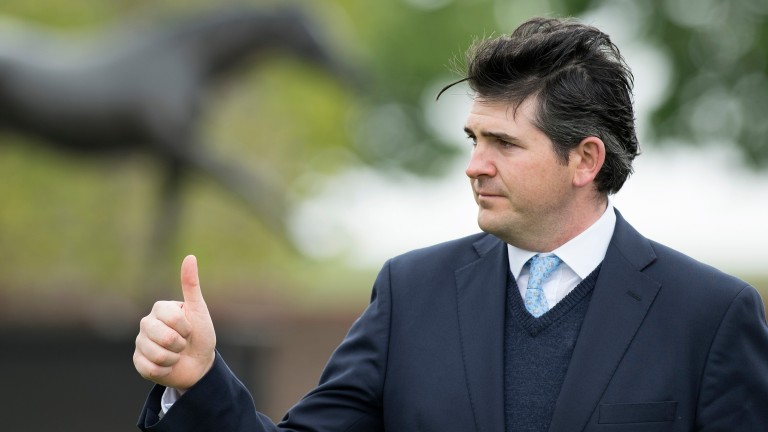 Hugo Palmer: has another promising two-year-old on his hands with Dig Two
Edward Whitaker (racingpost.com/photos)
1 of 1
By Sam Hendry UPDATED 6:45PM, MAY 31 2021

Hugo Palmer and James Doyle teamed up to win the National Stakes at Sandown last week with Ebro River, and they combined again with another promising two-year-old as the Royal Ascot-bound Dig Two outclassed his rivals in the 6f novice.

A winner over 5f at Newmarket on his last appearance, the son of Cotai Glory continued his upward trajectory by putting a sizeable distance between himself, runner-up Little Prayer and the rest of the field.

Palmer has both the Windsor Castle Stakes over 5f and the Coventry over a furlong further on his mind, and the winning trainer said: “We’ll proceed cautiously with Ascot in mind. He’s won over five but the further he went the better he looked today, which brings in the possibility of the Coventry.

"Working out which race to go for at Ascot is a nice problem to have. He’s a big horse and he’ll continue to progress as the season goes on.

"He’s been working with Ebro River at home and he wouldn’t be far behind. If the ground had been fast at Sandown I feel Dig Two would definitely have been at least second in the National."

Also bound for Royal Ascot could be the Richard Hughes-trained Karibana, who overhauled Highfield Princess in a thrilling finish to the feature 7f handicap.

After finishing unplaced in the competitive Victoria Cup at Ascot on his reappearance, winning jockey William Buick believes the Buckingham Palace Stakes at the royal meeting could be the perfect next step.

Buick, who doubled up on the day with Frow, said: “He was a progressive horse last year and I think he’s won today despite things being hard for him. A stiff seven furlongs in the Buckingham Palace at Ascot in a big field at a fast pace would suit him.”

FIRST PUBLISHED 6:35PM, MAY 31 2021
He’s been working with Ebro River at home and he wouldn’t be far behind

The Goodwood races that gladdened the heart and quickened the pulse Wonderful Tonight sails on but which French jockey will get the Arc call-up? 'I think she won like a good horse' - Wonderful Tonight is magnificent again Brilliant Baaeed strolls to fourth victory to leave Haggas aiming at the top Groom-to-be Buick loved up for more than one reason as Suesa strikes 'She just didn't fire' - James Fanshawe at a loss to explain poor Audarya run