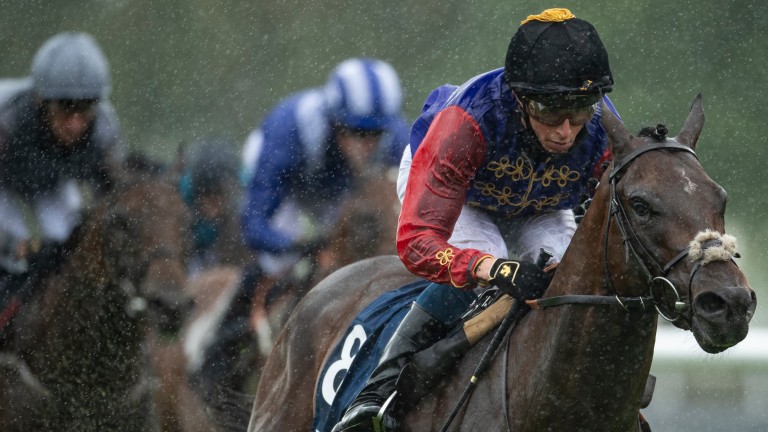 Had anyone been on course to witness it, the Panama hats would no doubt have been raised as the Queen celebrated success in the Group 2 Tattersalls July Stakes thanks to Tactical, a two-year-old who is going places.

Mind you, if racegoers had been allowed on course, they would have first been running for shelter as the heavens opened with the runners down at the start. Tactical, blessed with the temperament of a loyal Labrador, was unfazed by the commotion and soon came striding through the rain to add to his Royal Ascot success in the Windsor Castle Stakes in style.

"The way he did it looked even better again," said the Queen's racing manager John Warren, sheltering under a line of trees. "I think we might just have a very nice horse on our hands, which is exciting.

"The Prix Morny would be a potential objective. He's so laid back and so uncomplicated, he'd definitely handle the travelling and, whereas he looks like he'd stay seven furlongs, for the time being why not keep him at what he's been good at?

"William Buick said he's a proper horse and I'm thrilled for the Queen." 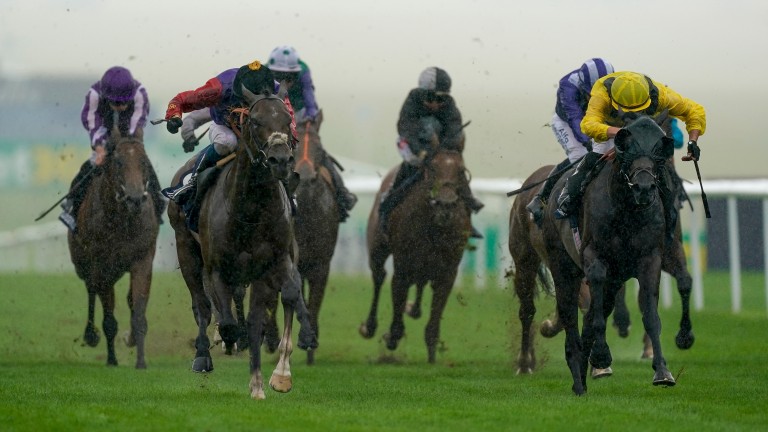 Tactical (red sleeves) confirms Windsor Castle form with Yazaman (yellow) on the July course
Alan Crowhurst
With Coventry Stakes runner-up Qaader in opposition, the July Stakes offered a chance to compare juvenile form from the royal meeting and it was the Windsor Castle which came to the fore, with Yazaman chasing the winner home in second just like he had at Ascot. Qaader was back in fourth.

"I think we're all impressed," said winning trainer Andrew Balding, also keen on a trip to France on August 23. "The Morny is the plan and he's shown he's versatile on any ground, which is good when you're planning to travel.

"More than anything I think that franks the form of the Windsor Castle and it's really fantastic for us to have a horse as good as this for Her Majesty. It's really exciting and rewarding."

The runner-up could be in for a busy time of things with connections keen to crack on with the precocious son of Kodiac.

"I think the winner is pretty good and we were beaten by a better horse," said Maureen Haggas, wife of Yazaman's trainer William Haggas. "To give our horse some credit I don’t think he saw the winner coming as he was a long way from him.

"Yazaman is an out-and-out two-year-old so we need to get on with him as I don’t think he’s going to change much next year."

FIRST PUBLISHED 3:13PM, JUL 9 2020
I think we might just have a very nice horse on our hands, which is exciting. William Buick said he's a proper horse and I'm thrilled for the Queen