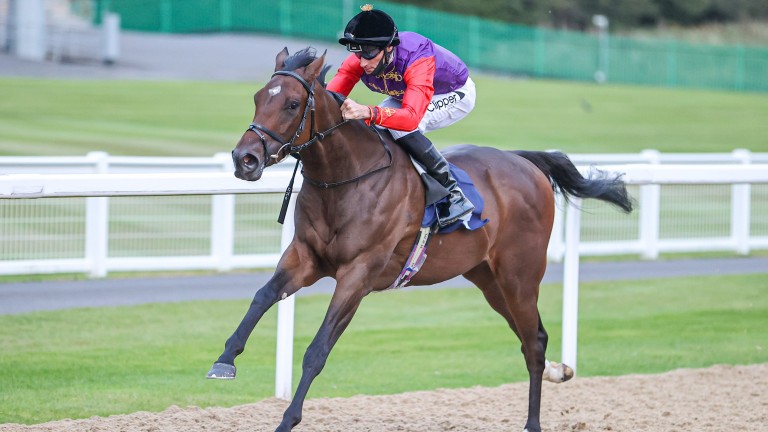 Light Refrain: picked up her first win since Newcastle in the Kilvington Stakes
GROSSICK (racingpost.com/photos)
1 of 1
By Catherine Macrae UPDATED 8:01PM, MAY 8 2021

Group races await Light Refrain next after she provided the Queen with a royal success following her impressive victory in the Listed Kilvington Stakes.

The daughter of Frankel looked comfortable in the testing conditions on her first start as a three-year-old, and is set to be stepped in class after her length and a quarter victory in the 6f feature.

Winning trainer William Haggas said: "She travelled well and Shane said she picked up nicely. I thought she’d handle the ground as she ran very well on it last year at York. I was more concerned with the draw to be honest, but she did what she needed to win.

"We’ll be looking at a Group race next, possibly in Ireland at the beginning of June at the Curragh."

Light Refrain joins a list of promising three-year-olds for Haggas after her work companion Aldaary continued his unbeaten run at Ascot on Friday.

He added: "The pair of them worked together last week, so that clearly did them both some good!"

Winning jockey Shane Kelly picked up a four-day suspension for incorrect use of the whip.

Doubles for Hanagan and Tudhope

Hanagan secured his first with Boundless Power in the 5f handicap before following up with Seasett in the 1m½f handicap.

Tudhope’s successes on Dark Shift and Vanity Affair were slightly dampened as he received a two-day ban for careless riding.

FIRST PUBLISHED 5:51PM, MAY 8 2021
I was more concerned with the draw to be honest, but she did what she needed to win.