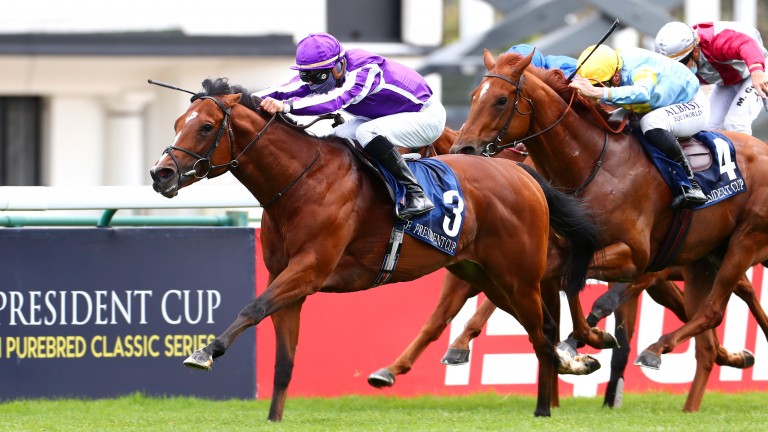 St Mark's Basilica: recorded the second Group 1 win of his career at Longchamp on Sunday
Quentin Bertrand
1 of 1
By Scott Burton UPDATED 9:38PM, MAY 16 2021

The two French Guineas fall two weeks later in the European calendar than the Newmarket originals on which they are modelled and how Aidan O'Brien used the extra 15 days available to his advantage, as St Mark’s Basilica swept past his toiling rivals to success under an ice-cool Ioritz Mendizabal.

Where Wembley and his stablemates had struggled to be on their A-game first up in the 2,000 Guineas, St Mark's Basilica shrugged off his long break with ease and demonstrated exactly why he was rated the winter Guineas favourite before the Coolmore brains trust had opted to wait for this Emirates-sponsored Poule d'Essai des Poulains.

Colosseo stayed on to give his delighted Italian-American connections a huge thrill in second, while Breizh Eagle finished off well down the middle of the track to take third.

But Jim Bolger's audacious bid to win two Classics in the space of 15 days foundered as Poetic Flare failed to respond to Kevin Manning's urgings and finished back in sixth, not far off the places but surely below the form he demonstrated in landing the Qipco 2,000 Guineas.

St Mark's Basilica was bred in France and O'Brien reflected that this was a delayed first visit to Longchamp for the son of Siyouni, who was rerouted to Britain's best two-year-old race when the Ballydoyle horses were ruled out of the Arc meeting due to feed contamination.

"I'm delighted with him," said O'Brien. "The plan last year was to go to the Lagardere but that obviously didn't work out and that's why he ended up going to the Dewhurst. Wembley was going to the Dewhurst initially so that's how everything changed around at the end of last season."

Watching on from Naas, O’Brien said: "He quickens very well. We'll see what we'll do now – he has the option of Ascot for the St James's Palace Stakes or back to France for their Derby. The original plan with him was to go for the French Guineas and then go back there for the French Derby so we'll see."

Ladbrokes make St Mark’s Basilica their 11-4 favourite for the Prix du Jockey Club while Paddy Power were more impressed and have him a 9-4 chance to fill one of the vanishingly few gaps on O’Brien’s CV.

"He'd been working lovely," added O’Brien. "You saw the way he progressed last year. They all couldn't go to Newmarket. They were all trained for Newmarket, but we had to split them up. When he was supposed to go to France last year, we said we'd stick that way. John [Magnier], Michael [Tabor] and Derrick [Smith] thought it was better to go to France with him."

O’Brien's plans had been disrupted after his original choice to ride St Mark’s Basilica, Pierre-Charles Boudot, was suspended due to an ongoing legal case. 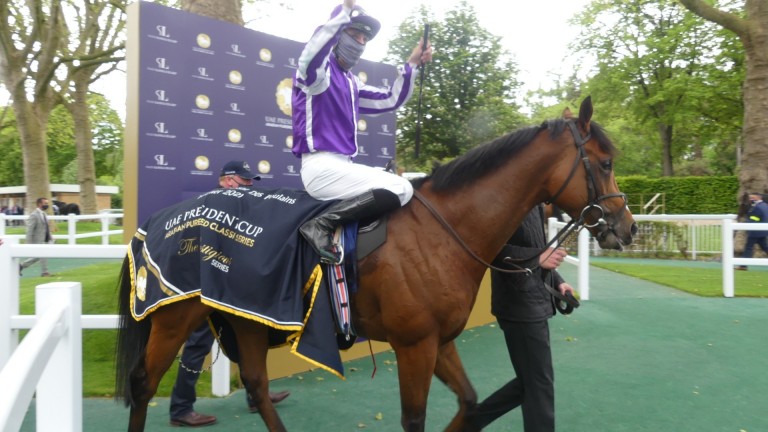 He said of supersub Mendizabal: "Ioritz rode Lope Y Fernandez to finish second for us at Deauville last year. He was very cool there today."

Mendizabal has enjoyed a golden period as travel for jockeys has been restricted during the pandemic and this success followed on from last season's Prix du Jockey Club aboard Mishriff for John Gosden and a Prix Jean Romanet victory for James Fanshawe with Audarya.

The 47-year-old Mendizabal said: "I was a bit cautious before setting him alight because he's been off a long time and so I took my time. But he settled it in two strides. He has that acceleration you only see with the cracks.

"I only got the call from my agent at 2pm on Friday and it was a surprise. There's enormous personal satisfaction in being entrusted with the ride by Aidan O'Brien.

"When you're sitting on a Formula One car like him 250 metres from the winning post in a Classic it's a great feeling and it's why we do this job."

Of the beaten horses there was evident disappointment for Manning, who said of Poetic Flare: "I got a lovely position but he just didn’t pick up for whatever reason, maybe it’s ground related, I don’t know."

Gianluca Bietolini, based in Maisons-Laffitte, could be nothing but proud of Colosseo, whose best performance at two was when runner-up in a Deauville Listed race and who had finished third over course and distance in his conditions-race prep.

"I have no voice left!" said Bietolini. "I knew he came here in top form and he showed it. The ground was too quick for him last time and he's a much better horse on very soft ground like this. He's completely atypical for an American-bred."

Breizh Eagle had finished a head and a short neck ahead of Colosseo in the Prix Machado and made the best of an awkward outside draw under Alexandre Roussel, losing his unbeaten record but hugely boosting his reputation with his third-place finish.

"He was quite keen but he has run brilliantly," said trainer Joel Boisnard. "He doesn't have a lot of experience but is an improving horse and I think there's more to come, especially back on better ground. I think he’ll stay at a mile."

Mehmento and Adam McNamara gave a bold show for the Hambleton Racing Syndicate and Archie Watson but faded late on in the style of a horse whose future lies at short of a mile.

'They think they're indestructible' – Margarson's road safety petition takes off

FIRST PUBLISHED 3:06PM, MAY 16 2021
When you're sitting on a Formula One car like him 250 metres from the winning post in a Classic it is a great feeling and it's why we do this job

I've seen no sign of a Lance Armstrong - but the thought makes me feel sick Ascot collector's item as Dettori's flying dismount outshone by tearful groom Love brightens the week for Aidan O'Brien but draw-bias punters are wrong-footed Surely the only horse Jim Bolger has ever trained that was tougher than him Poetic Flare underlines stallion credentials with St James's Palace Stakes romp Palace Pier v Poetic Flare: which camp are you in for the Sussex Stakes?