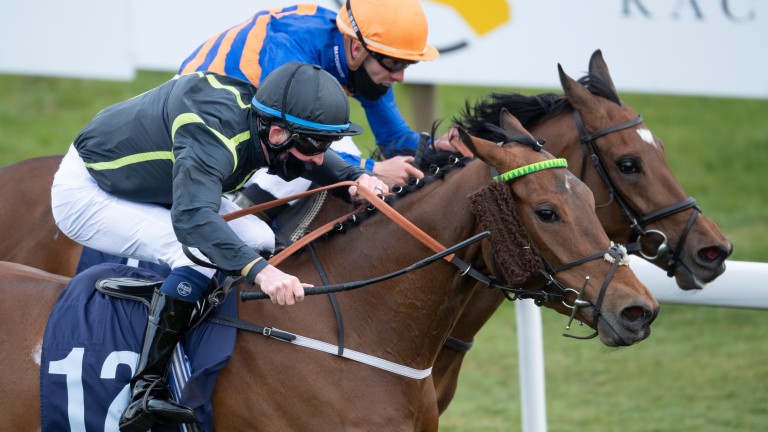 There was no more satisfied jockey than Ciaran McKee after he rode his first winner since returning to the saddle last year aboard Clog Na Fola in the 1m3½f handicap.

McKee rode 31 winners on the Flat and over jumps between 2009 and 2016 but quit race-riding the following year to become head lad for Tom George.

He decided when racing resumed last year to have a second go and victory on the John O'Shea-trained Clog Na Fola meant so much.

McKee said: “I missed race-riding really bad. John offered me a job again and said he’d have a few for me to ride, so I decided to give it another go and it’s paid off today.

“I don’t do lightweights anymore and don’t have an agent, but I’m enjoying what I’m doing and playing my part in John’s team. To ride a winner for him makes it extra-special.”

The Cross Channel Racing-owned juvenile cost 1,000gns at Book 4 of the Tattersalls October Yearling Sale and showcased a fine attitude to triumph by a short head.

Brisland said: “I was pretty hopeful as he’d been working with older horses who have shown a good level of form, which suggested he was above average, and he’d done plenty."

Blue Collar Lad was the first leg of a double for Sean Levey, who was also successful on Marlay Park, while Adam Kirby struck a double of his own on Golden Flame and Quarry Beach.

FIRST PUBLISHED 6:18PM, APR 6 2021
I missed race-riding really bad. I decided to give it another go and it’s paid off today