Pinatubo showdown could be next for Space Blues after Gheest glory 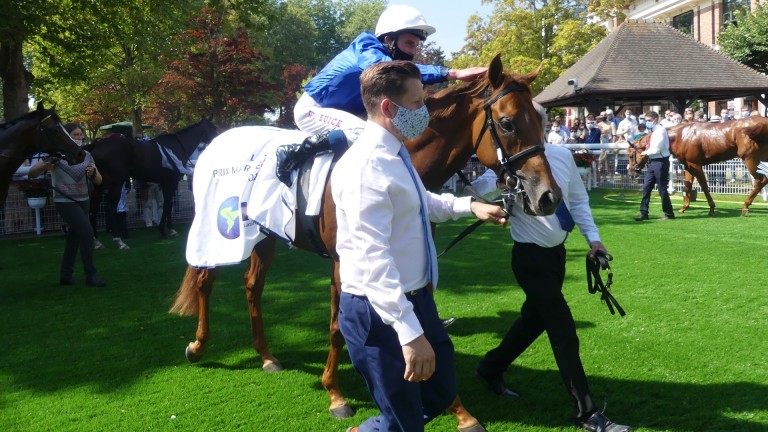 Space Blues may have carried the white cap of the Godolphin second string but he produced a performance out of the top drawer to hunt down the front-runners under a confident William Buick and land a first career Group 1 in the Prix Maurice de Gheest.

In doing so he ended the unbeaten run of his companion-in-colours, Earthlight, and afterwards Charlie Appleby suggested he would have no trouble pitching him into another 'blue on blue' encounter against Pinatubo in the Prix de la Foret.

Appleby said: "Seven furlongs is his trip. I’m happy to have as many good horses as we can and if it means running them together, then it’s a sport. One thing His Highness [Sheikh Mohammed] likes to see is sport and competition. We’ll see who is best [between him and Pinatubo] in the Foret."

Paddy Power introduced Space Blues at 5-1 joint-favourite for the Foret with hat-trick-seeking One Master, while three-year-old Pinatubo is a 7-1 shot.

It was the older brigade who held sway here over six and a half furlongs, with Hello Youmzain staying on powerfully to be second behind fellow four-year-old Space Blues, ahead of a trio of three-year-olds in Lope Y Fernandez, Earthlight and Golden Horde.

"I've been very lucky to have Blue Point in the yard and as a five-year-old, you see them getting stronger," said Appleby. "This horse couldn't have come into the race in better shape and a better profile, with confidence behind him.

"Every race he has stepped up in calibre and has won more impressively. Today from halfway, I knew they’d gone a very strong gallop and I thought they were either very good horses in front or it was going to be set up for a horse that comes late."

Buick was full of praise both for Appleby – who turned Space Blues round from winning the Lennox Stakes just 12 days earlier – and for the talent and toughness of his mount.

"He's a strong traveller, he was third in the race last year and Charlie has always said he’s a better horse this year, which he suggested in the Lennox," said Buick. "It's a better race this year than last, I thought it was a very good race with a couple of horses dropping down in trip that looked very good and then obviously Earthlight.

"This horse has been threatening to put up a performance like that and now he's got his Group 1.

"It's a great training performance. He’s got a great constitution. He’s a Dubawi, which obviously helps, and they tend to get better with age. Credit to the horse and the team at home."

Kevin Ryan is developing quite a record in this race, having sent out Brando to be first and then second, and Hello Youmzain ran another cracker under Kevin Stott. 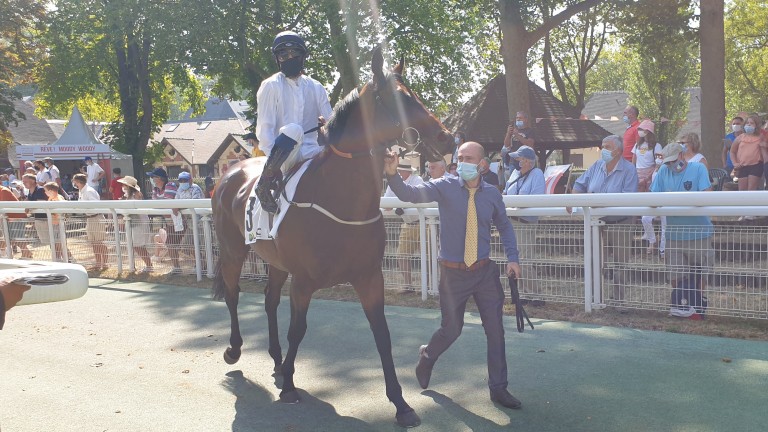 It was a timely performance from the future stallion resident of nearby Haras d'Etreham, although stud principal Nicolas de Chambure joked that he would need Hello Youmzain to throw in a rare clunker soon or else Ryan would be asking to keep him in training another year.

"He's been a superstar from day one. From the time he arrived in the yard he was always very naturally talented and a very exciting horse," said Ryan. "The ground would be plenty quick enough for him and now we'll look forward to Haydock, where his record is unreal and he maybe ought to be unbeaten.

"And there's a chance he might come back to France for the Arc meeting. Nicolas mentioned the Foret there and six and a half seemed to suit him well. He wasn't stopping at all and round a bend as well, that's food for thought.

"We'd look forward to meeting the winner again, that’s what great horses do, they take each other on. That’s what the spectators want."

"He's run a super race and I'm very happy with him," said Ryan Moore. "Hopefully he'll win one of these soon."

Adam Kirby said of fifth-placed Golden Horde: "It wasn't the extra half-furlong that beat him but the ground. He's run a great race."

Earthlight was sent off the 11-10 favourite but, although he once again got the better of Golden Horde, looked less streetwise than his older rivals.

"It's his second race back after a very long absence and this race will have been beneficial to him," said Godolphin's Lisa-Jane Graffard. "He had real races and tough battles last year but this is different again."

FIRST PUBLISHED 3:06PM, AUG 9 2020
I’m happy to have as many good horses as we can and if it means running them together, then it’s a sport