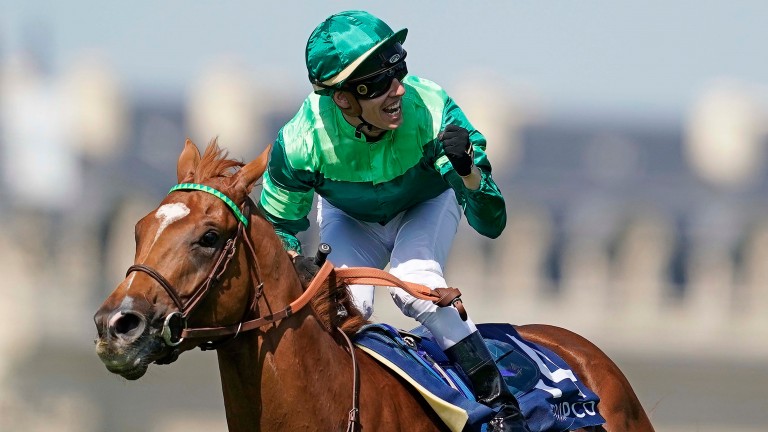 Last season's European champion three-year-old Sottsass showed plenty of the rust of last month's comeback defeat had been shaken off when striding to a hard-earned success over Way To Paris in the Prix Ganay at Chantilly.

In doing so he became only the third colt in 40 years to add the Group 1 to victory in the previous season's Prix du Jockey Club, following Bikala (1982) and Vision D'Etat (2009).

Cristian Demuro had Sottsass perfectly positioned on the shoulder of his conqueror from four weeks ago and looked set to take command when ranging up a furlong and a half out.

That he was pushed all the way to the line by Way To Paris will not have pleased every student of the form book, although the runner-up is in the form of his life.

Paddy Power cut the winner to 16-1 (from 20) for the Arc, a race in which he found only Waldgeist and Enable too strong last October.

Demuro gestured to the heavens after crossing the line and said: "It's a relief because we knew he wasn't at 100 per cent for his comeback run, but even so he finished a way behind some of the horses he faced again today.

"I know the second horse well and I'm happy that today we have seen the real Sottsass, while I think he can improve again for the run."

Sottsass was back at the site of his finest hour and, although he didn't get close to the blazing 2mins 2.90sec of his Jockey Club triumph, the son of Siyouni led home a five-runner field in a much swifter time than the winners of the two conditions races managed earlier on the card.

Jean-Claude Rouget was not at Chantilly to witness his first career success in the Ganay but will have been pleased with the reports he received, with longtime assistant and righthand man Jean-Bernard Roth pointing out that Sottsass ran disappointingly on his first start at three before bouncing back in his prep race for the Jockey Club

"Yes it's a relief but that said, this is the way things should proceed," said Roth. "He's an emotive horse and he didn't run up to form in his comeback, not for the first time. But where would be the point in having the horse at 100 per cent on May 11 [the day of the Prix d'Harcourt]?

"What I liked was how calm he was today. He was a very backward horse who is now maturing and I think he'll reach that full maturity this year.

"You don't have to cover him up anymore, you can ride him any way you want. He's just a very good horse and he has that acceleration that the good ones have."

FIRST PUBLISHED 1:52PM, JUN 14 2020
I know the second horse very well and I'm very happy that today we have seen the real Sottsass, while I think he can improve again for the run