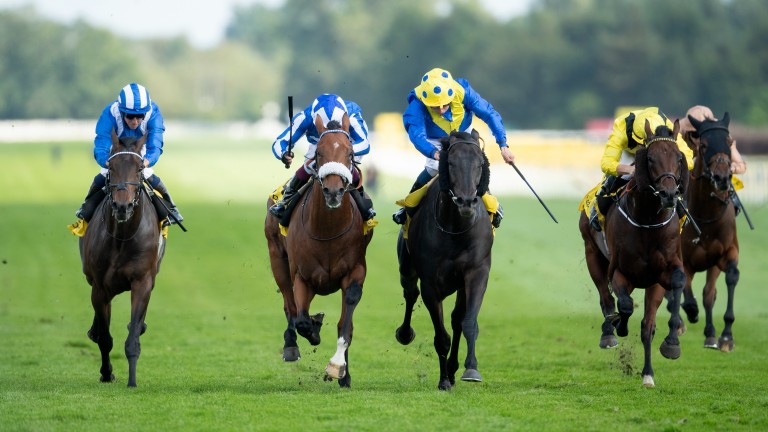 Solid Stone (third from left) shows a tremendous attitude to win a Newbury Group 3 in which Al Aasy (far left) disappointed
Edward Whitaker
1 of 1
By Lee Mottershead UPDATED 10:39AM, SEP 20 2021

What Solid Stone did in the heat of battle at Newbury only served to highlight what Al Aasy still frustratingly declines to do.

Within brackets at the end of the Dubai Duty Free Legacy Cup's official race title are the words 'Formerly the Arc Trial'. Against Al Aasy's name there could also be brackets, this time filled with the statement 'Formerly the Arc candidate'.

He was also formerly an entire, yet being gelded – which made him ineligible for the Longchamp spectacular – has seemingly made him no more inclined to scrap.

When winning here in May he looked a potential superstar. In two subsequent outings he succumbed to narrow defeats, raising questions about his bravery and prompting Shadwell and trainer William Haggas to take surgical action.

On this comeback outing there was regrettably more of the same, for having cruised into contention as the race's 4-6 favourite he weakened into fourth, finding little for pressure.

Solid Stone, conversely, could hardly have been more solid. The Sir Michael Stoute-trained five-year-old, also a gelding, had the lead, lost it but then regained it, showing a tremendous attitude under William Buick to overhaul Foxes Tales.

"When he could feel the others it got his mojo going," said Buick. "You wouldn't find many horses who have the tenacity that he does. He responded very well to everything I asked."

The Dubai International Airport World Trophy had a much happier outcome for the Haggas team, thanks to Hurricane Ivor, a horse on a roll and one most definitely not afraid of hard work, as he showed once again when surging past Group 3 opposition.

In July the former French-based speedster was beaten a short-head at Ascot seven days after a dead-heat success at Sandown. This time he was winning exactly one week on from his victory in the Portland Handicap at Doncaster, where, as here, he produced all his best work late under Tom Marquand. 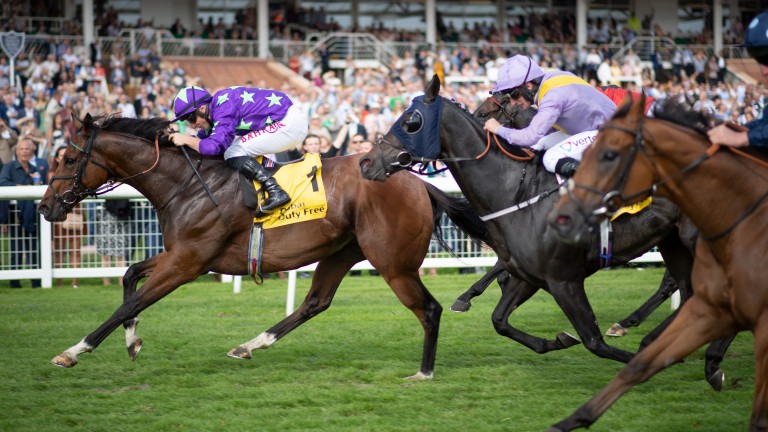 A supplementary entry would need to be made if Fiona Carmichael's four-year-old is to return to France for the Prix de l'Abbaye, but Haggas's wife Maureen said: "He could go to France, you never know, he's done nothing but improve.

"He takes a while to get going but this was half a furlong shorter than the Portland, so he's done well to win. He's a lovely straightforward horse and just does what you ask him to do - not much more, though!"

Charlie Fellowes recently announced the retirement of his stable flagbearer Prince Of Arran. The trainer may well have an heir apparent in the guise of Injazati.

On just his fifth racecourse outing, the three-year-old posted a big new personal best when making all to land the £50,000 1m2f handicap under Callum Shepherd.

"He kept finding with real effect," said Shepherd. "He started to lean towards the rail but he really got his head down and tried.

"It's my first time riding him and I wouldn't mind riding him again. Bigger things await. I think he's going to be a very good four-year-old."

Dubai Poet had shaped promisingly on his debut at the track last month and he built on that effort in spades, taking a seven-furlong novice contest by five and a half lengths for trainer Roger Varian 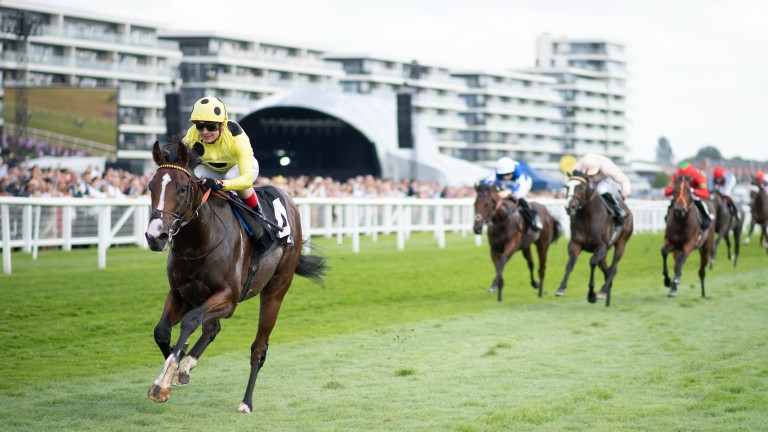 "He came off the bridle early enough but the further he went the better he was," said rider Andrea Atzeni, while Oisin Murphy was similarly taken with recent Ascot second Koy Koy, who took the second division by an even wider margin.

"He is a horse who is going to stay further," said Murphy of the Andrew Balding-trained winner. "I just left him to go a good, even pace, which is why I think the winning distance is so far. We used his fitness and experience."

FIRST PUBLISHED 5:56PM, SEP 18 2021
You wouldn't find many horses who have the tenacity that he does. He responded very well to everything I asked