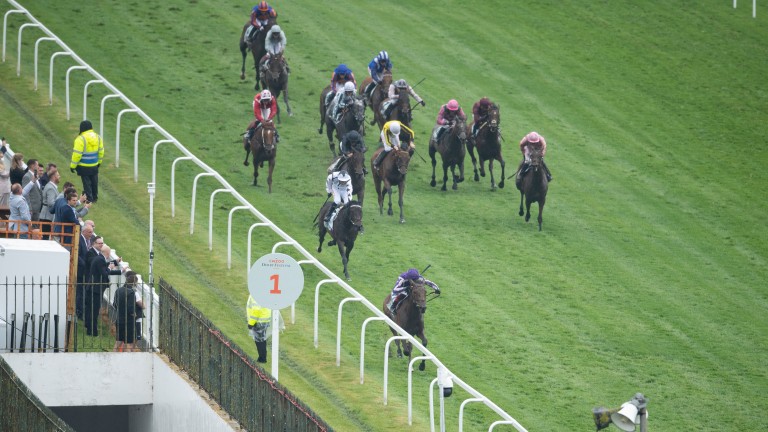 Snowfall stretches clear for a record-breaking 16-length win in the Oaks
Edward Whitaker
1 of 1
By Stuart Riley UPDATED 7:51PM, JUN 4 2021

It takes something quite special to overshadow Aidan O’Brien’s record-equalling British Classic success and Frankie Dettori in full flight, but there may be snowfall in June before the Oaks is again won this impressively.

Dettori compared the winner to the apple of his eye, Enable. O’Brien said he could see her challenging last year’s nine-length Oaks winner, Love, who Snowfall displaced at the head of the market for the Qatar Prix de l’Arc de Triomphe at 5-1. On this performance alone she looked the best middle-distance horse in training.

That O’Brien tied John Scott’s 185-year-old record of 40 British Classic winners and Dettori drew level with Fred Archer on 21 became incidental. The Oaks has never been won by so far. This is a serious filly.

“I’ve won many Classics, but not as easy as this one,” said the jockey, whose hardest job was stopping Snowfall afterwards. “I pulled up at the stables and everyone else pulled up by the winning post, it’s incredible really,” he said with a laugh of disbelief.

“Enable was very good, she did the Irish Oaks, King George and Arc [after winning the Oaks] and I wouldn’t put that past her, she’s that good.”

SNOWFALL hoses up to win the Oaks! @FrankieDettori does it again!

The glowing praise from Dettori did not end there, with O’Brien clearly taken by their private discussion post-race.

“Frankie said he was in first gear the whole way, he was mega impressed. He said at all stages she was cantering and it’s proper soft ground, but it felt like good ground on her, so she’s obviously just a very good filly. 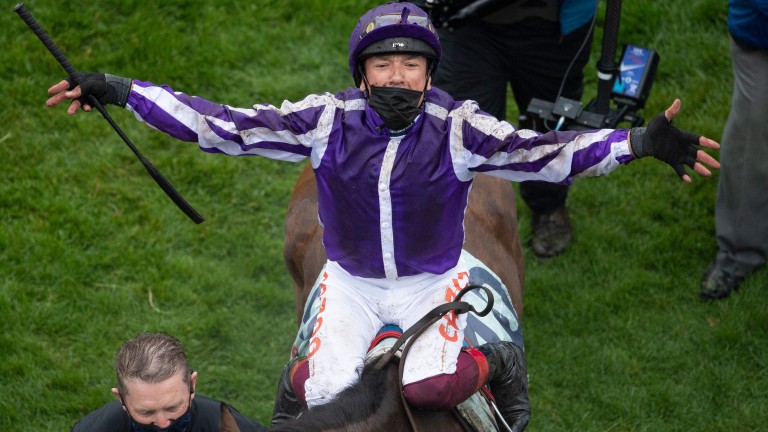 O’Brien has always been more comfortable talking about his horses' incredible achievements rather than his own. It is not an affliction that has ever troubled Dettori and yet all he wanted to talk about was O’Brien’s remarkable filly. You would have been hard pressed to find anyone among the 4,000 present talking about anything else in the immediate aftermath, such was the impression made by Snowfall.

“I was like a hot knife through butter, I had everything completely beaten coming around Tattenham Corner,” said the 50-year-old rider, who was enjoying just his seventh winner of the season and a second Classic in 2021. It was also a sixth Oaks, the race that gave him his first British Classic in 1994.

“She was unbelievable,” he added. “I wanted a better position but they were going way too fast, everyone was fighting to get in the first three, so I let them get on with it.

“Four out I had everything beat. I looked in front and they were all gone, I took a set of goggles down and thought ‘don’t be clever, just cut through the middle’. The only horse I hadn’t seen was Santa Barbara, so I took a glance and I was five in front – and then she took off.”

Members can watch the Oaks replay

The point at which she took off was the point O’Brien was most concerned about before the race. He said: “She has plenty of speed and I didn’t think she’d necessarily want a mile and a half, but looking at that she gets it on her ear. As she goes up in trip she’s only getting more impressive.

“We thought she was a proper Group 1 filly last year but she had a few races that didn’t work out for her. She got a lot of experience, raced a lot and did very well over the winter physically. Maybe she got stronger.”

Seven runs at two resulted in a solitary maiden win. This season she destroyed her rivals in the Musidora and then utterly routed them in the Oaks. It was 16 lengths to the runner-up and 40 to last place. The winning margin was a record for the Oaks, beating the previous best of 12 lengths by Sun Princess in 1983.

That runner-up was 50-1 shot Mystery Angel for one of the newest names among the training ranks in George Boughey, with O’Brien’s Divinely – subject of support during the week – third at 20-1 with Save A Forest fourth at 40-1. Yes, they went hard but the race did not so much fall apart as get blown to smithereens.

The 5-2 favourite Santa Barbara finished fifth under Ryan Moore and O’Brien added: “Ryan said Santa Barbara cantered into the race, but in that ground she emptied, so she’ll go back to a mile and a quarter. She has so much class.”

Just two months ago Epsom was covered in snowfall. On this special day Snowfall covered Epsom in a way few have in the track's 360-year history.

'It'd be great for racing' - Stradivarius team raring for Subjectivist rematch A step too far? O'Brien comments suggest Melbourne Cup dominance about to end Hussey shines as Iowa mows them down for Ulster Derby success 'He could be a Guineas/Derby horse' - O'Brien excited by Point Lonsdale 'I didn't say that. He's wrong' - Dettori counters Murphy best-horse claim A day when two big decisions had to be made - officials at Ascot got both right