Smart prospect Zawara on the mark for Dermot Weld 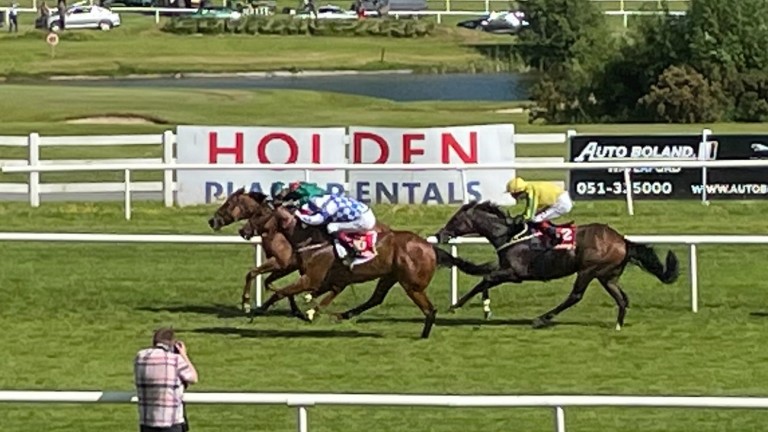 Zawara (far side) holds off Eaglefield in the conditions race at Gowran
Justin O'Hanlon
1 of 1
By Justin O'Hanlon UPDATED 10:08PM, JUN 13 2021

Dermot Weld's runners are starting to find form and the performance of the lightly raced Zawara in the 1m1f conditions race at a hot and sun-baked Gowran Park augurs well for her prospects for the rest of the year.

Having her second start of the season over a much shorter trip and considerably quicker ground, she overcame those possible disadvantages under Dylan Browne McMonagle, holding on inside the last furlong to fend off the strong-staying three-year-old Eaglefield by a neck.

Weld said: "She got some black type last year and the plan would be to get some more of it in the coming months. It's nice to win a good conditions race with her and that should hopefully set her up nicely for the season ahead."

He added: "That ground was probably as quick as she would want it, she would always like an ease in the ground, but that is just beautiful summer ground out there and it's a great credit to the clerk of the course Paddy Graffin and the staff here.

"She's a versatile filly as to trip. We might have gone a little bit far here the last day over one mile and six furlongs, but I would be confident she will get another couple of furlongs."

Summerhill trainer Sheila Lavery carded a double with two improving fillies in two of the handicaps.

They were both homebreds too. The progressive New Hill followed up her recent success at Roscommon to put up an even more convincing performance in the 7f three-year-old handicap.

Owned and partly bred by Tommy Kenny, the daughter of Dragon Pulse was bounced out in front by Robbie Colgan and barely saw another rival in beating the staying-on Gegenpressing by two and a half lengths.

Lavery said: "She has improved mentally and physically, she was far more professional today. She broke really smartly for Robbie and he was able to keep it simple.

"She would prefer a mile but these three-year-old-only handicaps are so hard to come across that you sometimes have to go the trip you think you will get away with. We'll try and keep moving her up the grades."

The Lavery double was completed in the concluding apprentice handicap in similar fashion by the Dennis Maher-owned-and-bred filly Moddy Poddle under Siobhan Rutledge.

The daughter of Pride Of Dubai made all and pulled out plenty of stops late on to score by a couple of lengths.

Lavery said: "She's another filly who's just improving all the time. I would say the owner would like to sell her but we will keep going while we can."

After finishing second on Joupe in the first division of the mile handicap, Seamie Heffernan was found by the stewards to have used his whip with excessive frequency and with his arm above shoulder height.

Having considered his record, the stewards banned him for six days and referred him to RACE for a day's tuition on the correct use of the whip.

FIRST PUBLISHED 6:56PM, JUN 13 2021
It's nice to win a good conditions race with her and that should hopefully set her up nicely for the season ahead