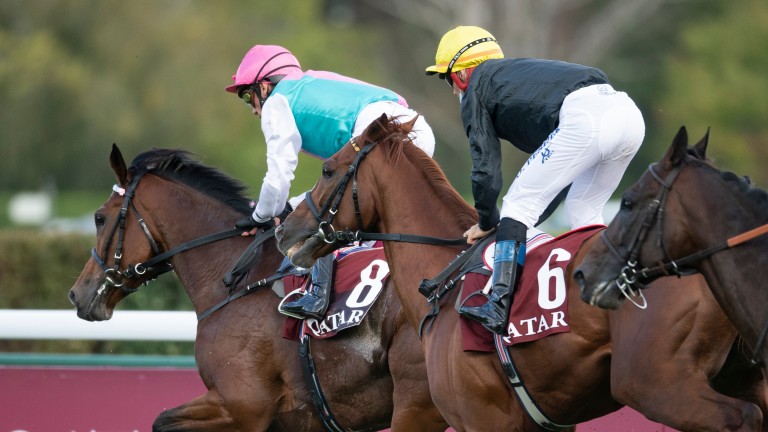 Enable and Stradivarius finish unplaced in the Arc with the ground and pace to blame
Edward Whitaker (racingpost.com/photos)
1 of 1
By Jonathan Harding UPDATED 7:16PM, OCT 4 2020

John Gosden said a decision on Enable's future would not be made for at least a week after she was denied an unprecedented third Arc.

The six-year-old could manage only sixth in testing conditions at Longchamp, with the trainer putting her performance down to her not handling the ground as well as a lack of pace in the race.

"She seemed great afterwards," said Gosden. "It was sporting for Khalid Abdullah to allow her to come back and try again this year, and had she not she wouldn't have won another King George.

"We'll see what the plan is with her and whether she's retired immediately. As always, Prince Khalid will want a report on her a week after the race and we'll see what happens from there.

"She didn't have a taxing race because they didn't go a good old gallop like they do in England and Ireland, but that's horseracing. If you can't take the punches in this game you shouldn't be in it."

Gosden said the late withdrawal of the Aidan O'Brien-trained runners on Saturday evening, including front-runners Serpentine and Sovereign, had a notable impact on the tactics of the race.

"We knew Serpentine and Sovereign were key to the running of the race," said Gosden. "They would have set an even gallop and once they were withdrawn the whole complexion changed.

"There was a concern there would be no pace and Pierre-Charles Boudot set a modest one on Persian King. Enable is a mile-and-a-half filly who would have appreciated more speed to aim at.

"Frankie [Dettori] felt she was not happy with the deep, drying ground and that her action was not suited to it. That's the first time she's ever finished out of the first three in her life. It was the pace and the ground, it's as simple as that. It's not very complicated.

"That's life and full marks to the winner and the first three. I would love to have seen them on good to soft ground. They're key factors. Sometimes they work in your favour, sometimes they don't."

Teddy Grimthorpe, racing manager to owner Khalid Abdullah, said there were no regrets over keeping Enable in training this year and spoke warmly about her remarkable contribution to the sport.

"Enable has given us so much, not only to Juddmonte and Prince Khalid but to the whole sport. She's been such an important part of our lives and we have no complaints nor excuses," said Grimthorpe.

"It's us who try to push her to do things. She's happy and retained her enthusiasm. She loves racing, her routine, her life and Frankie too, just as he loves her. They have a wonderful relationship.

"The expectations surrounding her have been pretty enormous but she's been such a joy. For her to win a third King George this year was exceptional. She's got a truly extraordinary CV."

'It's hard to get here let alone win it'

A decision will also be made on the future of Stradivarius in the coming days after the prolific stayer finished seventh in the Arc.

The six-year-old was bidding to emulate the likes of Ardross and Westerner, who dropped down markedly in trip for the race. He was a general second favourite in the build-up behind Enable.

"He looked like he had a good shot turning in, but he just didn't go as quick as we thought he would, perhaps because of the ground," said owner Bjorn Nielsen.

"It was still a privilege to have a horse in the race. It's hard to get here let alone win it. He's a great horse and he's won a lot of big races. He owes us nothing really and seems to be so popular."

FIRST PUBLISHED 5:12PM, OCT 4 2020
We'll see what the plan is with her and whether she's retired immediately