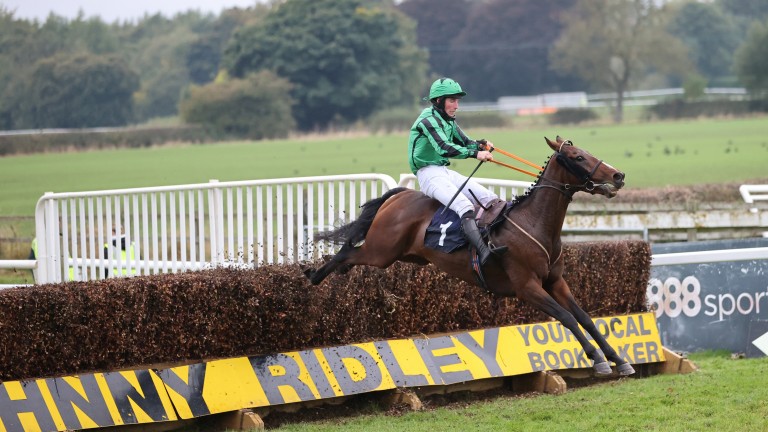 The core jumps season has barely started and already Irish trainers are raiding Britain's tracks of their biggest prizes.

The Durham National, Sedgefield's feature race of the season, traditionally stays closer to home, but the Shark Hanlon-trained Hewick made sure it was booked for export with a merciless display of jumping and galloping.

"He stays the trip and was very good," said Hanlon. "This opens up a lot of doors and he'll probably go on a break now as he's a good-ground horse. Next year, there are a lot of Nationals for him and we'll be spending a lot of time over here. He's only a young horse and I think he'll keep improving."

Hanlon is known for his eye for a bargain and picked up Hewick for €850 as a three-year-old.

"I love winning with the cheap horses because you get a buzz out of it and it means a lot more to me," he said. "I'm delighted for TJ as he's been an owner with me for 15 years and I don't think we've had a horse that didn't win."

Brian Ellison and owner Patrick Boyle were still on a high after Tashkhan split Trueshan and Stradivarius in Saturday's Long Distance Cup and they had another reason to smile following success with Gordon's Jet in the 2m4f handicap hurdle.

The 5-4 winner has proved expensive to follow since winning at Chepstow in April, but got back on track on his second start since a wind op.

"He obviously needed it last time as he'd had his wind done," said Ellison. "He's fit as well but I was worried about the ground because he does want it faster. I'll probably drop him back to two miles."

The trainer also struck in the 2m1f maiden hurdle with jumping newcomer Salsada, who won three of her seven starts on the Flat for Jedd O'Keeffe.

"You always hope they'll do it like that and we think a lot of her," he said. "She just had a problem with the stalls and she's been sent to me to go jumping.

"She made two mistakes and would have won by further otherwise. She's Listed class and probably wants more of a galloping track."

Minella Trump had won his previous four starts – all at Perth – and the change of track proved no problem as he brought up his five-timer.

The Tim Leslie-owned seven-year-old already had two course wins to his name and he made it three with a decisive all-the-way success under Brian Hughes in the 2m3½f novice limited handicap chase.

"He's quite versatile – he can make the running or follow one – and I was happy to roll along," said Hughes. "He's not overly big but he's a neat jumper.

"He's won five this season and likes a sound surface and I'm sure Mr Leslie and Donald [McCain] will be thinking ahead to a spring campaign on nice ground."

A Different Kind won the bumper to provide Hughes, also on board Gordon's Jet, with a treble and the in-form McCain with a double.

FIRST PUBLISHED 6:58PM, OCT 17 2021
There are a lot of Nationals for him and we'll be spending a lot of time over here