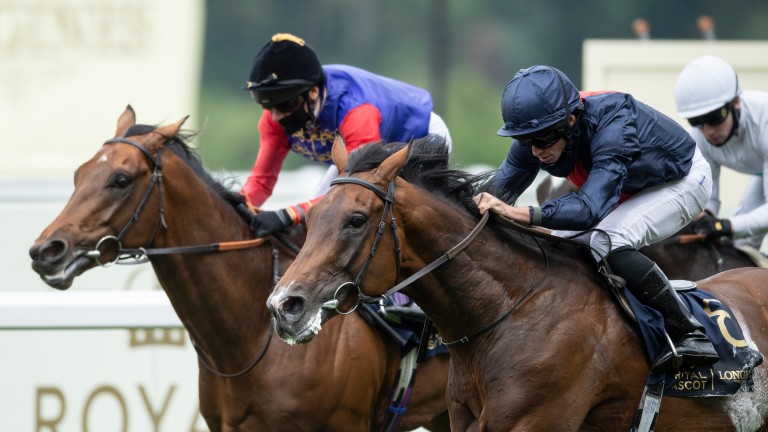 Russian Emperor joined the fringes of the Investec Derby picture when cutting down the Queen's runner First Receiver to give trainer Aidan O'Brien a record-breaking fourth win in the 1m2f Hampton Court Stakes.

Winning jockey Ryan Moore knew all about the eventual runner-up having ridden him to a seven-length triumph at Kempton on his reappearance and decided to track Sir Michael Stoute's runner in the early stages in behind a steady pace set by King Carney.

Still well off the tempo and off the bridle turning for home, Russian Emperor, sent off at 100-30, seemed to have plenty to do when Berlin Tango played his hand in the straight, where he was immediately challenged by First Receiver.

While that pair engaged in a duel from the furlong pole, Moore's momentum carried him by the royal runner close home for a cosy half-length victory. Berlin Tango, who ran very creditably under a 4lb penalty, was a further length and a quarter away. 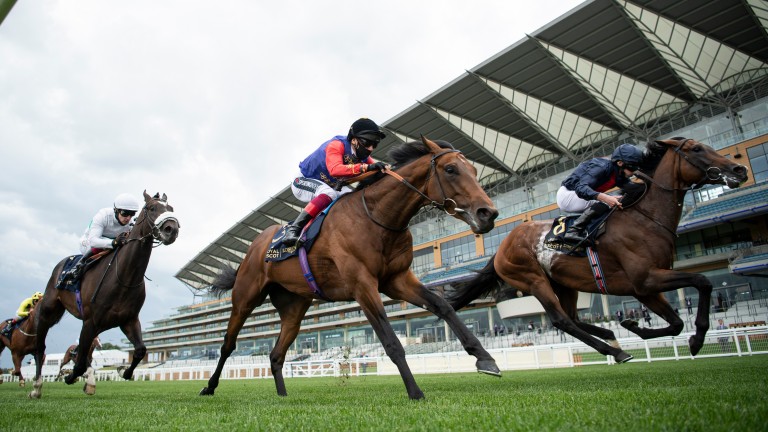 Russian Emperor was immediately cut to 8-1 (from 20) by Ladbrokes for the Investec Derby next month, although there was some debate afterwards whether the winner would be as effective at a mile and a half.

Owned by a partnership involving his breeder Laurie Macri and Sue Magnier, Russian Emperor was backing up just eight days after finishing second in the Group 3 Derrinstown Stud Derby Trial at Leopardstown.

The winning jockey said: "He's a really nice colt and he's got a lovely attitude. His dam was very good, she was a champion in Australia.

"He won his maiden at Naas and it was very quick at Leopardstown the last day, it was hard to make up ground. He was very professional today and he showed a good attitude. I think ten furlongs is fine but he may get further. He's a colt to look forward to."

Moore added: "He was very professional and straightforward and showed a good attitude. I think he'll be a nice horse for the rest of the year. Whether he runs in the Derby will be decided, but he's given himself a chance."

Runner-up First Receiver was appearing for just the second time on turf and was stepping up in trip after his comeback win over a mile at Kempton.

Jockey Frankie Dettori was offering no excuses for his near-miss. He said: "First Receiver ran a bit fresh but he ran a super race and is a nice colt."

Andrew Balding, trainer of third-placed Berlin Tango, said his colt will not be joining stablemate and 2,000 Guineas winner Kameko at Epsom next month.

The trainer said: "That was an excellent run from the first three horses. Berlin Tango will go to the Dante Stakes, which has been moved to July this year, at York next."

FIRST PUBLISHED 2:01PM, JUN 17 2020
Whether he runs in the Derby will be decided, but he's given himself a chance

Exciting O'Brien juvenile Luxembourg set to show star promise in Beresford test 'I wouldn't change her for anything' - key quotes for the Cheveley Park Stakes Aidan O'Brien pays tribute as star filly Santa Barbara suffers fatal injury Promising filly set to climb the ladder after eyecatching fifth on debut 'He looks sure to run well whatever the ground' - Tom Segal on Champions Day Big-race trends: no getting away from Group 1 class in Champion Stakes