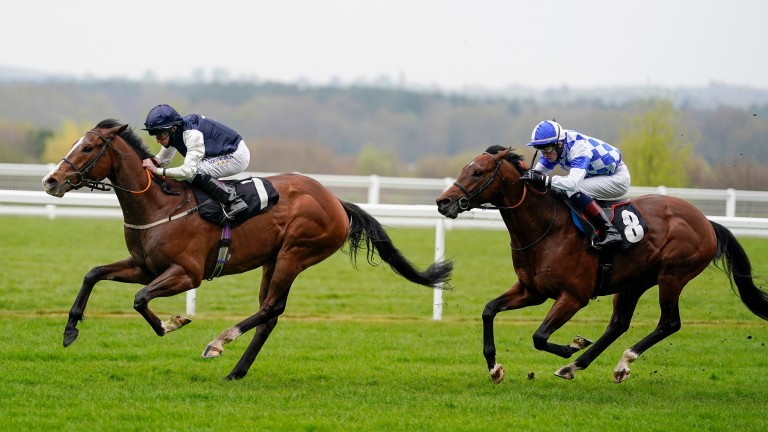 Rohaan picked up impressively under Ryan Moore to cause a 22-1 upset in the Group 3 Pavilion Stakes as 10-11 favourite Supremacy finished last of the eight runners.

The David Evans-trained winner came from the rear of the field to weave his way through and deny Saint Lawrence with a turbo-charged finish.

Fit from a productive all-weather campaign over the winter, Rohaan produced a career-best and registered his first win on turf, having finished fifth at Newmarket 13 days earlier.

Moore said: "He's been in great form all winter and the level track helps him. He's an honest horse with a good turn of foot. A strongly run race has suited him and he gets six [furlongs] well.

"I didn't think we'd be beating a peak-form Supremacy, but for whatever reason he wasn't running his race at halfway. Fair play to Dave and the owners for putting him in here and they've got their just reward."

All eyes were on Supremacy, Britain's best two-year-old last season following wins in the Richmond and Middle Park, but he was in trouble a long way out.

Adam Kirby was pushing along the Clive Cox-trained colt not long after the halfway point and he failed to beat a single rival home.

The Pavilion has become a recognised trial for the Commonwealth Cup – 2018 runner-up Eqtidaar went on to win at Royal Ascot – and having been the ante-post favourite, Supremacy was pushed out to 12-1 (from 4), while runner-up Saint Lawrence was introduced into the market at 10-1.

Cox was as shocked as anyone, with no immediate excuse offered for Supremacy's disappointing effort.

He said: "We're all a bit surprised. He was the first beat and I'll be disappointed if something doesn't show but we're not aware of it right now. It was a bit easier ground than we've run on before, but I'm searching for excuses myself."

FIRST PUBLISHED 3:33PM, APR 28 2021
Adam Kirby was pushing along the Clive Cox-trained colt not long after the halfway point and he failed to beat a single rival home

Four things we learned on the fifth and final day at Royal Ascot And you thought finding the Royal Hunt Cup winner was hard . . . Oisin Murphy lands top jockey honours as Foxes Tales storms to Golden Gates win 'Hopefully he's not finished yet' - Rohaan continues his remarkable rise Dream Of Dreams edges out Glen Shiel to finally get his Diamond Jubilee 'What a filly' - Wonderful Tonight a Royal Ascot first for delighted connections