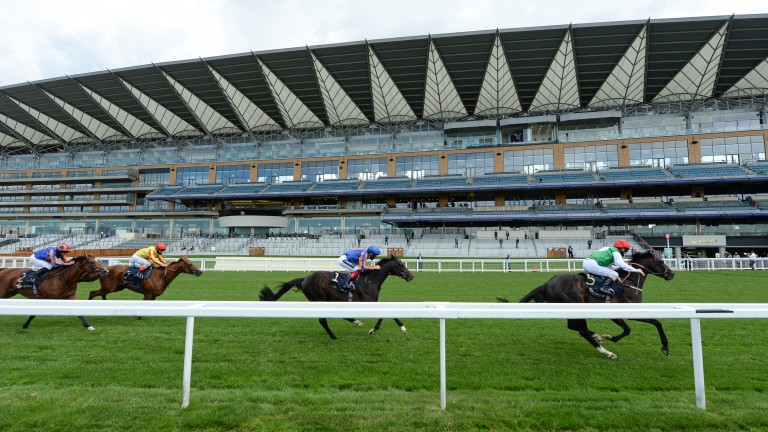 Unwanted as a foal and friendless in the market for Tuesday’s King Edward VII Stakes at Royal Ascot, Pyledriver proved everybody who has ever doubted him wrong by delivering on the big stage for William Muir and Martin Dwyer.

Sent to post a largely unconsidered 18-1 chance, Pyledriver delivered a knockout blow to some of the powerhouse stables by running out a gritty winner of the Group 2.

The performance earned Pyledriver quotes of 14-1 for the Investec Derby in three weeks’ time and Muir believes he may never have a better chance of landing the iconic race.

Watch Pyledriver pummel his rivals in the King Edward VII

The trainer said: “I read in the paper that he was slightly inconsistent but he was just weak as a kitten last year. I came here today thinking I could have two winners. I was quite confident that this horse would run a massive race as he had really come to himself over the past three or four days.”

Muir added: “To be fair, one of the owners said to me if I wasn’t happy with him the day before the race, I didn't have to run him but, three or four days before the race, he started to spark and he was bouncing.

“I wondered if we'd have had enough time as it was just under two weeks ago [since he ran at Kempton] but he can only keep getting better.”

On the colt’s Derby prospects, Muir said: “I drove the box to Kempton and on the way home, one of his owners rang me asking can we go to Royal Ascot and then on to the Derby. I said that's far too much and that we can't expect the horse to do that. And, now of course we can!”

He added: “I will monitor the horse but this is probably the only year that we would have a chance as it's the same entry stage for everything else. We have three weeks and if he does well we can go there.”

The unlikely Derby contender could easily be racing in a different set of silks. Not only was the horse bought back by connections at just 10,000gns at Tattersalls in December 2017, Pyledriver's owners have turned down offers during the colt's racing career as well.

Muir explained: "There are three owners involved. They sent Philip Hobbs to buy a jumper in France and he came back with his dam La Pyle. She had a setback and was sent to stud. She went to Harbour Watch and produced Pyledriver. They took him to the sales and he didn't even make the minimum bid so he was put into training with me. We had a few bids after his first win at Salisbury and at Haydock.”

He added: “They said if one of them owned him they'd have to say yes but as it's three of them they decided they'd enjoy the journey. Thank God they did because I am too. They also took La Pyle to New Approach, Oasis Dream and Frankel. She's in foal to Kingman too so I'll have to keep training for a few more years."

FIRST PUBLISHED 3:14PM, JUN 16 2020
I was quite confident he would run a massive race because he's really come to himself in the last few days

Brewin'upastorm readily accounts for McFabulous in Grade 2 at Fontwell How does the government's timeline impact the racing and betting industries? 'His jumping was deadly' - Gold Cup hope Champ runs a cracker behind Sceau Royal 'If he can't breathe, he can't win' - Nicholls to check Cyrname after Ascot flop How big a factor will Goshen be in the Champion Hurdle?