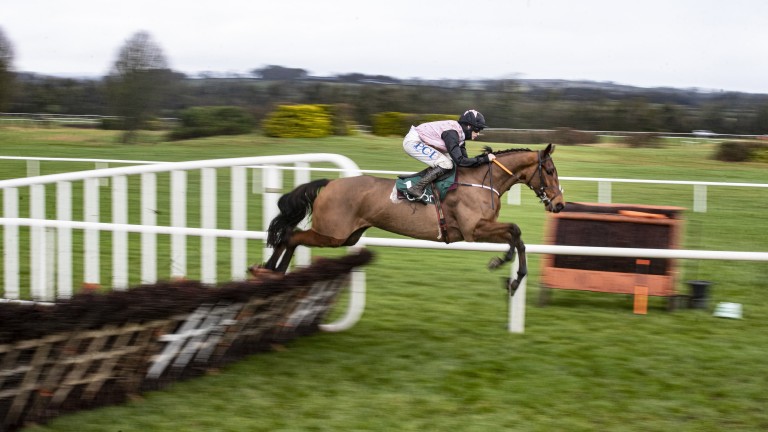 Bob Olinger made the leap from a horse of considerable potential to Grade 1 winner in some style when registering a convincing success in the Lawlor's of Naas Novice Hurdle to spark a cut in his Cheltenham Festival odds.

Paddy Power trimmed him to 5-1 (from 8) for the Ballymore Novices' Hurdle, and to 7-1 (from 10) for the Albert Bartlett Novices' Hurdle, which his trainer Henry de Bromhead and jockey Rachael Blackmore won two years ago with Minella Indo.

In a race dictated at a steady pace by Gabynako, the winner settled far better than his main market rival Blue Lord. The two went on from the second-last, but when Blackmore asked Bob Olinger for his effort he responded well, jumping the last superbly and drawing clear up the hill to score by six and a half lengths.

Blackmore said: “I was just trying to ride a straightforward race, he's a simple horse to ride in that manner. I was happy the whole way and he was nice and relaxed the whole way.

"He jumped better today in the second half of the race and the jump is there if you ask him. Everyone has always thought a lot of this horse from day one. This was the big test. This trip looks ideal for him for now and he looks like he might get further in time.”

De Bromhead's assistant David Roche said: “He's brilliant, a proper horse. No matter what tactics they try, they can go quick or slow, he just hacks away and the quicker they went the better his jumping was.”

Blue Lord was only seen off before the final flight after pulling Paul Townend's arms out for more than two miles. Trainer Willie Mullins said: “I was very happy with that, he was just too keen and that's something we need to sort out. It was a good performance from the winner too. We might change tactics with him over that trip. He was very keen but he appeared to stay.”

It was a luckless race for Jessica Harrington. Her main hope Ashdale Bob fell at the second flight, while her other runner Crosshill took a heavy fall at the last. Both horses and their riders were unscathed.

Epatante, Honeysuckle and Sharjah among 27 entered for the Champion Hurdle

Dan Skelton: 'If Shishkin turns up, we'll have that fight there and then, no problem'

FIRST PUBLISHED 2:33PM, JAN 13 2021
Everyone has always thought a lot of this horse from day one. He's been very consistent and anyone that's been involved with him has always liked him

Bob Olinger another Sholokhov star after Grade 1 performance at Naas Spot the silks! Success for Sea Pigeon colours and Jonjo O'Neill's racing club 'It's been excellent' - Walford continues red-hot run as major gamble lands 'I was very taken with it' - Energumene jumps into Arkle picture for Mullins The inside track for a Grade 1 treat that promises plenty of Cheltenham clues Confirmed runners and riders for the Grade 1 Lawlor's Of Naas Novice Hurdle