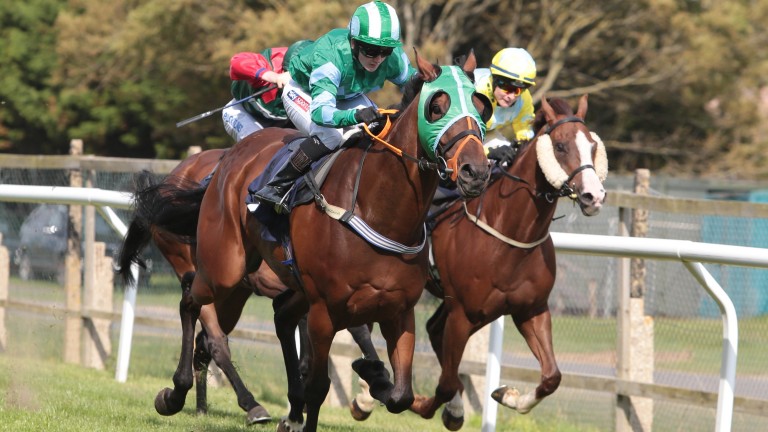 Pour La Victoire galloped into retirement in the finest of styles on the first day of Brighton's summer festival as he stormed clear up the hill to record his 11th course success in the 7f handicap.

On his 36th start at the course and his 121st overall, the 11-year-old rolled back the years to beat 100-1 shot Mr Moneypenny by a length and three-quarters to the delight of the Brighton faithful.

Owners James Lawrence and Darren Blake were on course to see the success and could not hide their emotion as they revelled in Pour La Victoire's memorable final swansong.

"This is a bit of a speechless moment for us," Lawrence said, after posing for a photo with Brighton's winningmost horse. "These are the days you dream of. Is this all actually happening?

"Did he just win in that style? The good old PLV style of coasting round and coming through late to do what he does best. When he's happy he just gets on and does it.

"We're going to go out on a high and retire him today. We had a chat with Tony [Carroll, trainer] and we were thinking this would probably be his last season."

The victory was all the more apt as it fell on the same day as the opening of the Pour La Victoire suite, a new bar named in honour of a horse who has made the south coast track his own.

"He can stay at the bottom of Tony's garden at home where he lives with another horse," Lawrence said. "They have a lovely little paddock there and he'll be a happy horse in retirement."

The 11-year-old began his career at Ripon in June 2012 with Nigel Tinkler before joining his long-time trainer Tony Carroll in May 2013.

Blake added: "We must thank Tony for this wonderful journey he's given us. This horse owes us absolutely nothing and so it's right that we quit and let him go out right at the top."

Pour La Victoire was the first leg of a 167-1 treble for Carroll, who also struck with 1m4f selling handicap winner Temur Khan and Holbache in the 6f handicap.

Zulu Girl defied a hike in the weights to take the feature Brighton Mile Challenge.

Trained by Daniel and Claire Kubler, the daughter of Lethal Force was an impressive winner at Chepstow last month after which she received a 10lb rise from the handicapper.

That did not prove insurmountable, though, as she held on gamely under Nicola Currie for a length-and-a-quarter victory.

Currie said: "She was the jockey's dream ride there. There was a lot of pace in the race but she's a filly who loves to gallop so I just let her bowl along.

"You know when you ask her the question she'll keep going. If she's got enough left she'll give you everything she's got and if she's good enough she'll win."

FIRST PUBLISHED 3:34PM, AUG 4 2021
This horse owes us absolutely nothing and so it's right that we quit and let him go out right at the top