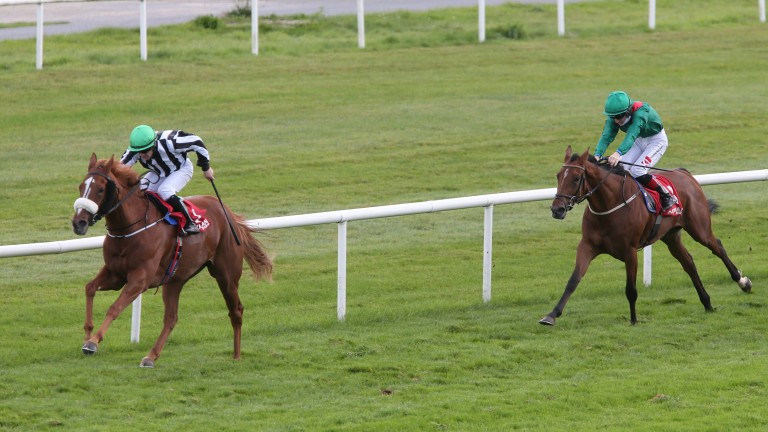 Trainer Jessica Harrington's incredible run continued apace as she landed the Group 3 Denny Cordell Lavarack & Lanwades Stud Fillies' Stakes with the improving four-year-old Astadash under Wayne Lordan. It was a second career win for the daughter of Zoffany, who may be heading to stud following this win.

The filly, whose only previous win came in a Dundalk maiden for Kevin Prendergast late last year, had shown her liking for this track when a close second to Solene Lilyette in the Listed Hurry Harriet Stakes last month.

Her improvement to land this race by a comfortable three lengths from Emaniya and Sense Of Style mirrored the improvement that the Harrington string have enjoyed in the last couple of weeks.

The winning trainer said: "She loves it here. She ran a blinder here last time to finish second and she was really good today. I'm delighted she got big black type because she comes from a lovely family.

"She's a late developer and we've had a few ups and downs with her over the summer. She's such a big filly and has taken a long time to really come to herself, but I would imagine that is probably job done for her."

Through the afternoon, jockeys were of differing opinions as to whether to come stands' side or stay on the inner in the straight. In the second division of the mile handicap, all of the jockeys decided to come to the stands' side. Except one. And it was the dissenter Chris Hayes who reaped the rewards as he stayed on the inside rail to win on the Pat Murphy-trained 20-1 shot Dusty Winds.

Hayes said: "My lad probably handled the ground better than most. The reason I stayed inside was because I was drawn low, and I didn't see the sense in me dragging right across to the stands' side. The ground is the same everywhere in my opinion." 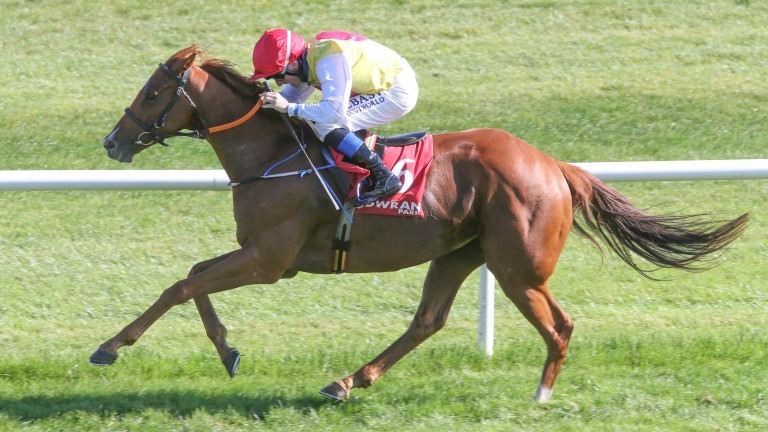 Following an indifferent Irish Champions Weekend, Ballydoyle have come back to form, especially their two-year-olds after a double in the first two races made it six juveniles winners in the week for the training outfit.

Second in her first two starts, Galileo filly History made quite short work of her opponents in the opening contest under Wayne Lordan, quickening up well to beat newcomer Clemmie C by two and a half lengths.

"That was pretty straightforward," said Lordan. "She feels like she's improving all the time. Today I thought she quickened up like a smart filly, her form has held up well and she appears to be progressive. Going to a mile was a help and I think her trip will be a mile to a mile-two in time."

Completing the double in the colts and geldings' maiden was Scriptwriter, although the 11-8 favourite was put to the pin of his collar before getting up close home to beat Adonis by three parts of a length under Seamie Heffernan.

FIRST PUBLISHED 6:40PM, SEP 18 2021
She's such a big filly and has taken a long time to really come to herself, but I would imagine that is probably job done for her

'Four Gold Cups, an unbelievable horse' - Aidan O'Brien recalls Ascot hero Yeats Classic prospect Sissoko has Donnacha O'Brien dreaming of Epsom glory Order Of Australia 'didn't show up' as he trails in last in Keeneland Grade 1 Ryan Moore: 'I try not to offend anyone but for me it's always about the horses' Aidan O'Brien: 'Drug talk must stop - don't tear apart the sport with no facts' Love misses Champions Day as Aidan O'Brien reroutes Snowfall to Fillies & Mares