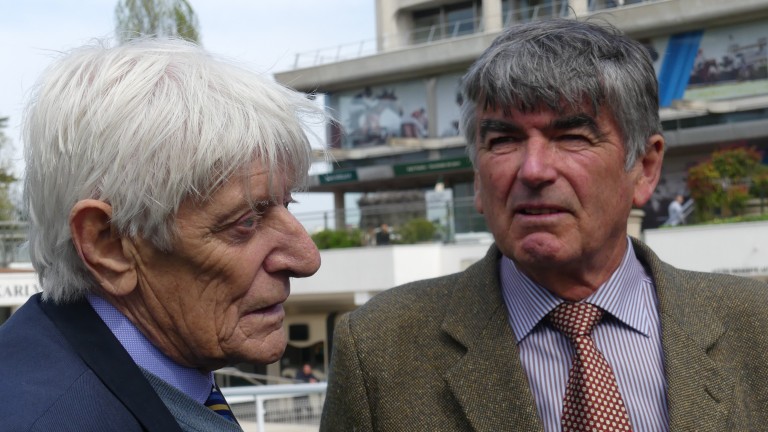 Jim Gordon (left): the late owner's two daughters were present at Catterick to witness Not On Your Nellie's victory
Racing Post / Scott Burton
1 of 1
By Sam Hendry UPDATED 7:16PM, APR 7 2021

Catterick's Flat season began in poignant fashion for the family of owner Jim Gordon, whose daughters were there to witness the first winner in his name since his death when 12-1 chance Not On Your Nellie triumphed in the 5f apprentice handicap.

The four-year-old, who is named after Gordon's grandson, was an emphatic four-length victor under Faye McManoman and provided trainer Nigel Tinkler with his first winner of the year.

Tinkler said: “I'm very, very happy with that. The horse is owned by Jim Gordon, who has been a fantastic supporter of racing and unfortunately died before Christmas. This is his first winner since.

"His daughters were here, which was lovely, and it was great to see them. It meant a lot for them to be here today and even though it’s a low-grade race, it’s lovely for them to win."

He added: "I’ve had nine seconds since Christmas so this is nice. We’re looking all right, we just need the weather to get a bit warmer now."

The Phil Kirby-trained Iconic Belle recorded a superb seven-day hat-trick on the all-weather last month and continued her progress back on turf in the 1m4f handicap.

The seven-year-old mare was running off 13lb higher than when beginning her sequence on March 11, and had to dig deep under Andrew Mullen to hold off the fast-finishing Molinari by a short head.

FIRST PUBLISHED 6:13PM, APR 7 2021
It meant a lot for them to be here today and even though it’s a low-grade race, it’s lovely for them to win