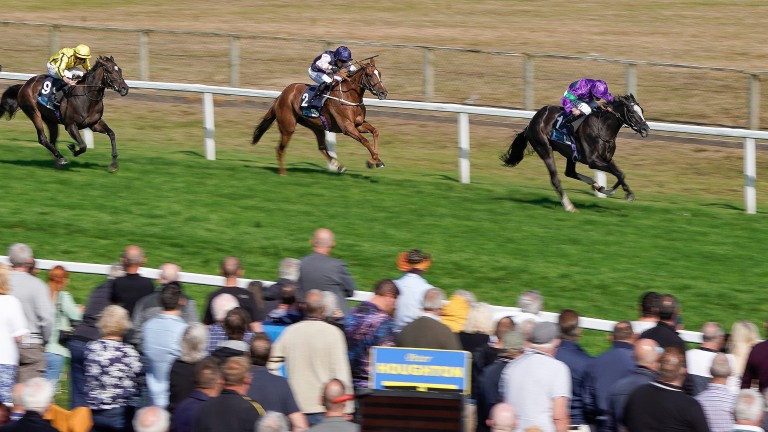 Ville De Grace did the annual feature at the Norfolk track justice when putting on an emphatic display to land the Listed John Musker Fillies' Stakes.

The 12-runner contest looked an open affair beforehand, but was blown apart during the race as Ryan Moore steered the daughter of Lope de Vega to a three-length victory and give Sir Michael Stoute a fourth win in the 1m2f highlight.

The winner was going beyond a mile for the first time in her career and may now have found her optimum trip after striking at the furlong pole to reel in front-runner Freyja.

Ville De Grace is owned in partnership by Chris Humber and her breeders Hunscote Stud and Stephen Smith, owner of the latter, said: "She really needs top of the ground to show her best form but Ryan said she got away with it today.

"It's great that she's got some bold black type and it could be that she stays in training next year when we could look to go abroad with her, but that will be down to Sir Michael."

Moon puts rivals in the shade

Millennial Moon kept the good record of market leaders going in the 7f juvenile maiden despite wandering across most of the track under Cieren Fallon. 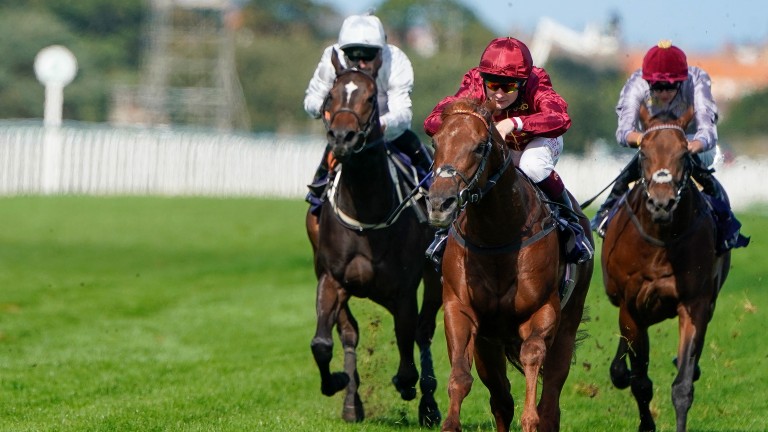 Despite breaking from stall five, the son of Dubawi was forced to make a challenge on the far side rail after being carried left by the pacemaker Vintage Fashion, but still managed to win impressively by two and a half lengths from newcomer Nations Pride.

Joint-trainer John Gosden said: "We thought about dropping him back in trip after Newmarket but stuck to seven furlongs and it looks the right decision. We'll look at another novice I would imagine."

Yarmouth celebrated 100 years of racing on the North Denes on the second day of the Eastern festival and the present day crowd were in raptures when the well-backed favourite Fauvette won the opener.

The Class 5 6f fillies' handicap represented a drop in class for the four-year-old, who scored tidily under William Buick and thrived off the atmosphere of the 4,000-strong crowd. 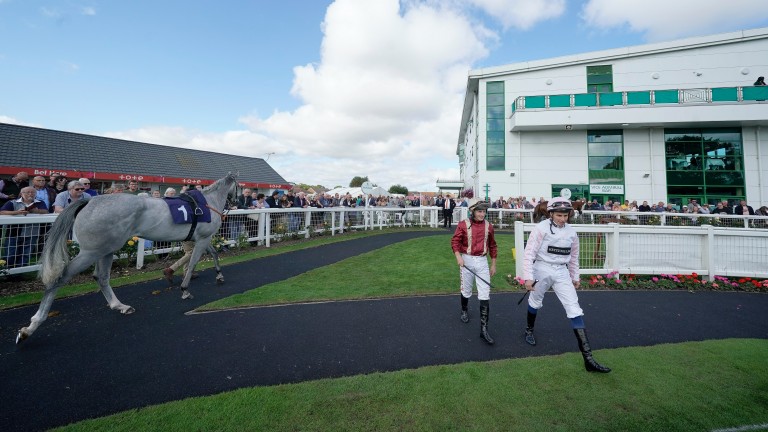 Winning trainer Rae Guest said: "This is only the second time she has seen a crowd but she loved it and there were plenty cheering her on. She's a lightly raced ex-Shadwell filly who has taken her time but hopefully she can pick up another one of these."

George Margarson loves a winner at the three-day fixture and he duly delivered with a double, which kicked off when the popular Ropey Guest landed the mile handicap under Tom Queally.

The four-year-old was cut to 40-1 (from 66) by Paddy Power for the bet365 Cambridgeshire after the triumph and picked up a penalty for his success, which means Queally can keep the partnership intact at Newmarket on Saturday week.

Margarson said: "I love having a winner at Yarmouth, it's like my second home. We had a couple beaten yesterday that we fancied so this was a nice win."

There was a sting in the tail for Queally, who was hit with a nine-day ban for overuse of the whip, which he will serve between September 29 and October 2, and between October 4 and 8.

Stablemate Media Guest later doubled up in the closing 6f handicap to register his first career win under Jane Elliott.

FIRST PUBLISHED 6:18PM, SEP 15 2021
It's great that she's got some bold black type and it could be that she stays in training next year

Yarmouth Placepot tips: Richard Birch with his advice for Tuesday's card 'Things didn't go his way' - future of Stradivarius to be determined this week Which of the Gosden pair might prevail in a competitive running of the Balmoral? Mishriff delights David Egan as clock ticks down to Champion Stakes showdown 'I've got the buzz' - Robert Winston lands first winner since retirement U-turn Stradivarius to be left in Long Distance Cup on Champions Day at Ascot